Why they are devoted to the Holy Child Jesus? 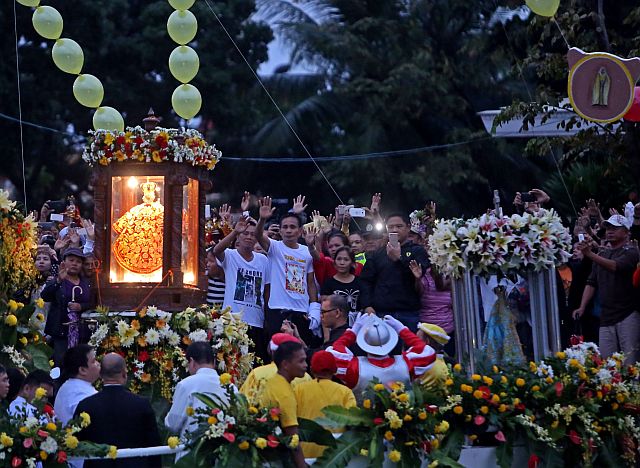 Devotees lining up at the Ouano Wharf wave goodbye as the yacht carrying the sacred images leaves the wharf, signaling the start of the fluvial procession. (CDN PHOTOS/LITO TECSON)

HUNDREDS of devotees, including a couple in their 40s and two lolas, braved the wet and cold weather and joined the sea of people who participated yesterday in the different activities for the Señor Sto. Niño in Mandaue and Cebu Cities.

The Dongog couple, who are in their 40s, were among those who joined the fluvial procession yesterday.

Glenda Dongog told Cebu Daily News in an interview that she and her husband were there to thank the Sto. Niño for the safe return of their 29-year-old son, who left their home about a year ago and had never been heard of since.

Glenda and her husband, Renante, who are from Lapu-Lapu City, said they prayed to the Sto. Niño for the safe return of their son, which was granted a few weeks ago.

Yesterday, the couple were waiting for their turn to board one of the motor bancas at the Mandaue port in the early hours of the morning, which would join the fluvial procession.

In Cebu City, 81-year-old grandmother Expedita Melencion woke up early, braved the rains and traveled all the way from Minglanilla town in southern Cebu to the Basilica Minore del Sto. Nino de Cebu to attend the activities leading to the solemn foot procession.

Melencion, who endured the pain from arthritis in her knees, said she was there to thank the Sto. Niño for the graces given her and for answering her prayers in the 1980s, which started her commitment to pay homage to the child Jesus.

Another grandmother, Teresita Baguio, 79, traveled six hours from Looc in Ginatilan town, southwest of Cebu, just to witness the grand celebration with thousands of other devotees.

“I first experienced the miracles of the Holy Child when he took my husband out of a sticky situation at work overseas,” Teresita recalled the incident in the 1970s which led to her devotion to the Sto. Nino.

She said she only heard about the “miracles” of the Sto. Nino through stories of her friends and that she never took them to heart until she turned to the Child Jesus for help during that family crisis.

“I never took those stories to heart. One time, at a point of desperation, I kneeled in prayer before him and poured out my heart to him saying, ‘Milagroso man gyud kaha ka? Karon milagruhi na sad ko (If you truly are the miraculous God that the people profess you to be, then let me experience your miracles),’” Teresita said.

She said countless miracles had flowed into her life after she opened her heart to the Sto. Nino.

Expedita and Teresita only have one prayer to Sto. Niño: that he preserves their health that they may continue to worship and serve him in the remainder of their lives.