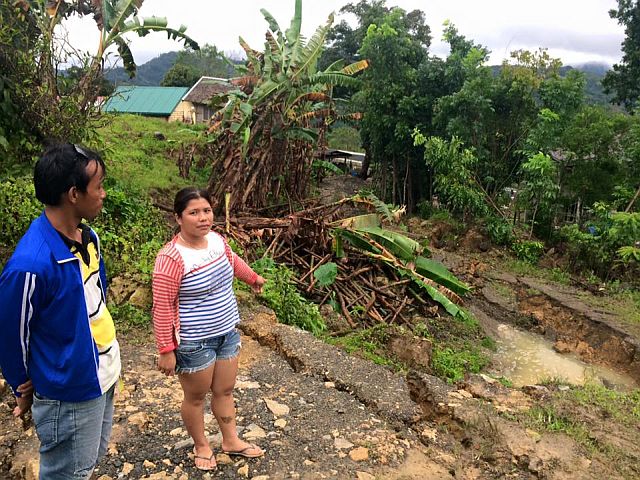 Around 84 families were evacuated from Mount Pung-ol in Barangay Sirao in Cebu City following the movement of soil which caused cracks on the mountain.

Huge cracks which started to develop while it rained on Monday morning also damaged the barangay road, “like the area was hit by an earthquake.”

Bañacia said on Facebook that if cracks would continue to develop, this could also damage the famed Sirao flower farms located nearby.

Land is still moving (in the area) and (remains) dangerous (to residents),” said his FB status which he posted past 7 p.m.

Anticipating more rains, Councilor Joy Augustus Young announced late on Monday afternoon that suspension of classes will be extended to Tuesday in the city’s 31 mountain barangays.

Young first announced the half-day suspension of classes in all public pre-school, elementary and high school at noontime on Monday.

A team from the City Schools Division of the Department of Education (DepEd) visited the city’s mountain barangays on Monday to check on the condition of the schools in the area.

“The team noticed many landslides on the highways and along the roads leading to mountain schools which are dangerous to students passing,” Young said.

Classes in urban barangays will already resume on Tuesday unless heavy rains would persist.

Young said that students will later be required to do Saturday make up classes to cover for the suspension of their classes.

Read Next
FLIGHT TO SAFETY