Some netizens seek revival of death sentence for ‘Savage girl’ 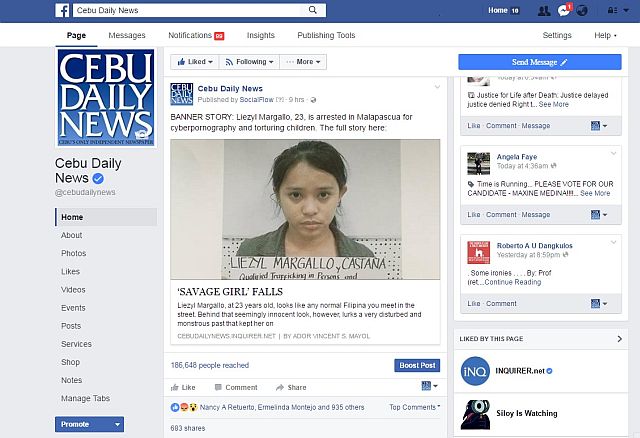 As of 4 p.m. on Thursday, CDN’s article on ‘Savage Girl’ Falls had generated 370,000 web shares. It was also shared by 683 Facebook followers. (Screenshot of Cebu Daily News’ Facebook Page)

The story of of the arrest of 23-year old ‘savage girl’ Liezyl Margallo drew so much outrage, and equal amount of hate, in the internet that many have started calling on the government to revive the death penalty in the Philippines.

Margallo is an alleged human trafficker with 16 arrest warrants in Cagayan de Oro City for the torture and sexual abuse, captured in gruesome sex videos, of about a dozen female street children, including a 12-year-old one who was tortured to death.

Her whereabouts was largely unknown for nearly two years until her arrest last Wednesday in a resort on Malapascua Island, located off the mainland town of Daanbantayan, 127 kilometers north of Cebu City.

Noeh Ortega Fernandez, in a comment posted on Cebu Daily New’s banner story posted on its website today, said: “This is a sick, demented, poor excuse of human being. Can somebody tag any Catholic bishop or clergy about this? Please include Senator Hontiveros and ask them if this individual still deserves to live? This is a perfect example why death penalty should be revived.”

For Xy-za La Fuerte, Margallo and her cohort, Australian national Peter Gerard Scully, deserve nothing less than capital punishment: “WHAT THEY DID TO THOSE LITTLE GIRLS IS PLAINLY UNACCEPTABLE!! Such sadistic, psychotic, inhuman act!! WE SHOULD BRING BACK THE DEATH PENALTY!”

Another netizen named R-jhay Saranillas Mari Jr., said Margallo deserves to be hanged: “Just like what she did to the one year old baby. Devil!” Mari added.

Others also believe that she deserves to be tortured. Said netizen named JC Yang, “This is just too much!!!! How can anyone be this evil?!!!!! Death penalty is too lenient for this kind of person.
Life in prison and torture her everyday. Give her hell. She needs to feel pain and suffering for the rest of her life.”

(READ: Malapascua resident aghast that a “vile” woman hit in their paradise island)

(She shuould not be sentenced to death. She has to be tortured every day. Include the Australian who said he was not scared of prison. Let both of them be whipped every day. Then give them water torture and give them a lashing again.)