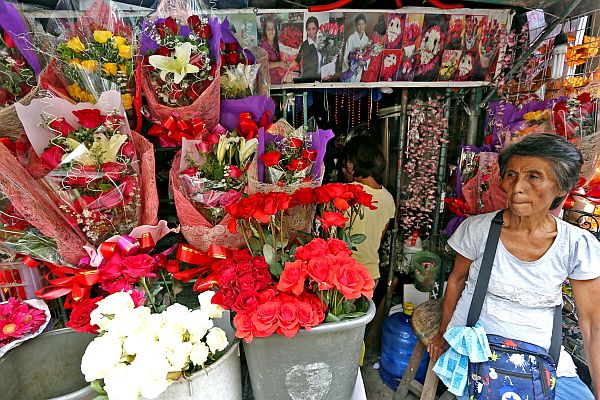 WHILE February is generally considered a “slack month” for business, brisk sales are expected days leading up to the occasion most lovers look forward to each year.

“They are not only busy, but their bottom line goes sky high since prices of flowers are five to ten times more during those days,” Go told Cebu Daily News in a recent interview.

He said he anticipates the flower farm in the mountain barangay of Sirao in Cebu City to come to life as wholesalers gear up for their supply of fresh flowers.

He also said that importers also bring in assorted flowers from Netherlands, to be displayed in flower shops or delivered directly to recipients.

Prices of roses at the Freedom Park in downtown Cebu City still range from P250 to P350 per boquet at this time, but are expected to increase to P700 to P1,000 over the weekend.

Other popular flowers to give on Valentine’s Day aside from roses, according to Reader’s Digest, are tulips, orchids, sunflowers, gerber daisies, lilies, carnations, and succulents.

Some flower shops in Cebu City also sells preserved roses in different variants for around P1,500 each.

The history of giving loved ones flowers during the occasion stems from an old-fashioned custom of sending floral bouquets to pass on non-verbal messages, a practice done by lovers when, according to legend, Roman Emperor Claudius II outlawed marriage in a bid to turn single men into soldiers during the third century.

Aside from flowers, the demand for chocolate products, especially the gourmet kind, will also be high next week since these are also popular Valentine’s Day gift items.

The PRA Cebu president said the jewelry business will also be booming during those days, with bracelets, necklaces, earrings, and bangles being the most popular.

Restaurants will also be full on Valentine’s Day, Go added, with establishments in the city offering specials in their menu that day.

“Some retail shops are up nearing Feb. 14, especially those selling lovers’ items. Some go on sale to attract Valentine’s shoppers with over 50 percent in discounts,” said Go.

Go said he expects shoppers to go on a buying spree the weekend before Feb. 14, which falls on Feb. 11 and 12.

However, he said the surge in buyers would not be the same as those at Christmas since these dates are so close to payday, and only those who have more disposable may go out to buy.

“The rise in retail sales usually happens at the end of the month. Department stores usually go on sale during payday for slack months, especially if it falls on a Friday or Saturday. That’s a sure surge,” Go said.

Right after the Sinulog celebration in January last month, he added that retailers were quick to change their motifs from images of the Holy Child to hearts.

Go said that as early as three weeks before Valentine’s Day, lovers would already be enticed to buy something for their special someone.

“Changing motifs also give life to department stores. These promotions are their life blood to give more excitement to shoppers. When shoppers get excited, they tend to buy more,” he added.

After Valentine’s Day, he said retailers will now shift their motifs to that of summer or the end of a school year in March.

Read Next
‘I’M DRUNK, I LOVE YOU’ GETTING INTOXICATED WITH ROMANCE, MUSIC AND FINDING LOVE