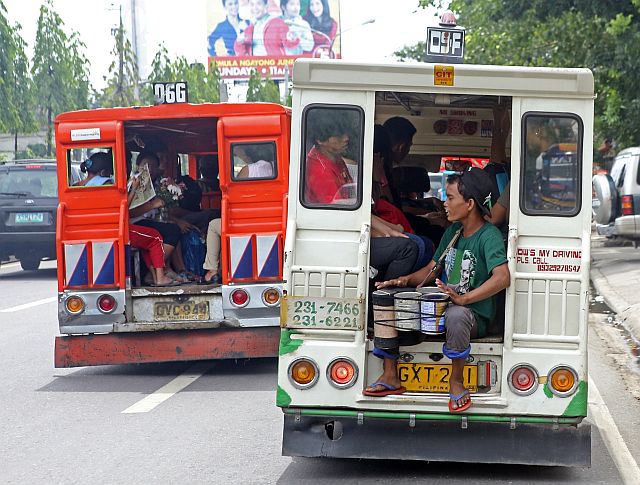 Jeepney carolers will be brought to police stations for profiling after reports that a group has been scaring commuters with veiled threats to force them to give them money. (CDN FILE PHOTO)

What used to be just the territory of transportation network companies (TNC) Uber and Grab may now be common practice for jeepneys if two big transport groups in Cebu had their way.

In separate petitions filed before the Land Transportation Franchising and Regulatory Board in Central Visayas (LTFRB-7) yesterday, the Cebu Integrated Transport Service Multipurpose Cooperative (Citrasco) and the Basak Lapu-Lapu City Jeepney Operators and Drivers Association (Balacjoda) under the National Confederation of Transportworkers Union (NCTU) – Visayas asked for a price surge on the fare for time covered and distance traveled during heavy traffic.

“Our main reason for filing this fare surge is because of the heavy traffic,” Citrasco president Ryan Benjamin Yu told reporters on Friday.

Yu explained that the group’s petition for a P1.50 fare hike during peak hours, particularly between 7 a.m. to 9 a.m. and 5 p.m. to 7 p.m., was also due to the increased fuel consumption of public utility jeepneys (PUJs) when stuck in heavy traffic.

“We did not conduct a study to identify these hours covered, but based on our observation, these are the hours which heavy traffic happens,” Yu said.

According to Citrasco’s petition, the prevailing minimum fare of P6.50 may be applicable for non-peak hours.

Meanwhile, in two separate petitions, NCTU’s Balacjoda asked LTFRB-7 for a P1.50 fare surge and a P1.50 minimum fare increase because of the rise in fuel prices and traffic congestion.

According to Armamento, it would sometimes take drivers in the cities of Mandaue and Lapu-Lapu two hours just to reach their destination.

“Before, drivers could earn P400 to P500 a day in 14 hours. At present, drivers could only earn P300 a day,” Romeo Armamento, vice president of NCTU – Visayas told Cebu Daily News.

LTFRB-7 Director Ahmed Cuizon said that a public hearing will be set by LTFRB-7 on the fare hike petitions.

The basic minimum fare in Metro Cebu is currently pegged at P6.50 for the first five kilometers. Beyond five kilometers, an additional 90 centavos is charged to the commuter.

“We have to consider both sides of the issue before coming up with a recommendation that will be submitted to the central office,” Cuizon said.

Surge pricing is the practice of adjusting fare rates to reflect the demand for transport and the available supply of public vehicles./with Fe Marie Dumaboc