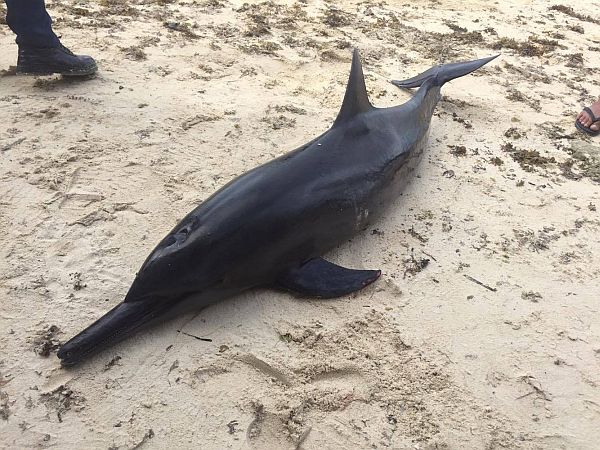 A spinner dolphin was found dead at Panagsama Beach in Moalboal on Friday morning.
Via Kristina Luz Uy Tapales

THREE spinner dolphins were found dead, one off Panagsama Beach in Barangay Basdiot, Moalboal town and two in Barangay Montañeza in Malabuyoc, all along the Tañon Strait Protected Seascape (TSPS).

Kristina Luz Uy Tapales, TSPS operations head of Department of Environment and Natural Resources (DENR) 7, said a tourist discovered the dead dolphin at around 7 a.m. yesterday as he was waking along the shore at Panagsama beach.

“We still have to identify the cause of death because there are no wounds found,” Tapales told Cebu Daily News.

She also could not say if the strong waves could have caused its death, saying dolphins are playful, good and fast swimmers.

The spinner dolphin found in Panagsama Beach weighed 46 kilograms and was 1.8 meters long. It was buried yesterday at the municipal cemetery.
The spinner dolphin’s dorsal fin identified as belonging to the Ronda pod in the town of Ronda, southwestern Cebu.

“In a pod there are 15 to 100 dolphins found. Researchers were able to identify the dorsal fin of this dead dolphin through photo,” Tapales said.

Erik Ybas, Environment & Natural Resources Officer of municipality of Malabuyoc said that local fishermen in Sitio Lala O, Barangay Motañeza tried to return the dolphins to the sea but they later died because of wounds in their mouth.

“The fishermen failed to return them and noticed that there was blood coming from their mouths,” Ybas told Cebu Daily News.

He commended the local fishermen for trying to save the dolphins.

“I appreciate them bisan pa sa aghat sa ubang tawo ipa karne pero wala buhata, (despite the proddings from people to eat the dolphins, they did not do it). Really worth appreciating,” he added.

The two dead juvenile dolphins were turned over to Municipal Agriculturist and buried in Municipal Cemetery.

Tapales explained that she could not identify which specific pod these two juvenile dolphins belong since they have not seen its dorsal fins.
Tañon Strait is an important migration corridor that measures 518, 221 hectares or 161 kilometers long.

There are 14 species of sea mammals, 18,830 hectares of coral reefs and 5,000 hectares of mangrove area with 26 known mangrove species in the stretch.

Read Next
Dimataga on 113 indictments: ‘I was too complacent’