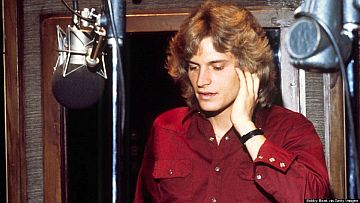 Oozing character in a black leather jacket, semi-flared pants, and black pointed shoes, Rex stood out from a crowd of mall-goers that flocked to his pre-Valentine show at Ayala Center Cebu.

You see, it has become practice for this American singer-actor and former teen heartthrob, who played Daredevil/Matt Murdock in the television movie “ The Trial of the Incredible Hulk” (1989), to celebrate the month of love here in the Philippines, a night of crooning and swooning in an arena filled with people or in an intimate show.

Last February 11 was no different.

In a quick chat before the show, Rex shared about running down clubs, working at a young age and getting away with it using a fake ID, and eventually making it into the industry with the song “You Take My Breath Away,” which he recorded perfectly on
the first take—and he knew right then and there that it was going to be a hit.

Rex has had his fair share of struggles before living the dream, only to get to the top and realize that fame is over glorified, yet empty.
Ironically, it was at the peak of his career when he felt the loneliest. Good thing, there was Broadway.

Here, he tells us the secret to his longevity and what his favorite Filipino snacks are.

What’s your fondest memory of Cebu?

I have always been doing Valentine shows here in Cebu, and you just remember it forever. It’s always a great evening with the great audience, a room filled with warmth and love. For me,Cebu is truly like California; it reminds me of where I live.

Is Valentine’s your busiest season?

Yes, it is, and usually my wife is travelling with me. Oh, we just got a puppy, and it’s like having a new baby in the house. Her name’s Joy. She’s the cutest thing, and I have five children. With the travels I have to make around the world, my family has gotten used to it. And if we don’t get to celebrate on Valentine’s Day itself, we have it on another day. We even have a birthday month becauseI might be on tour on their birthdays. 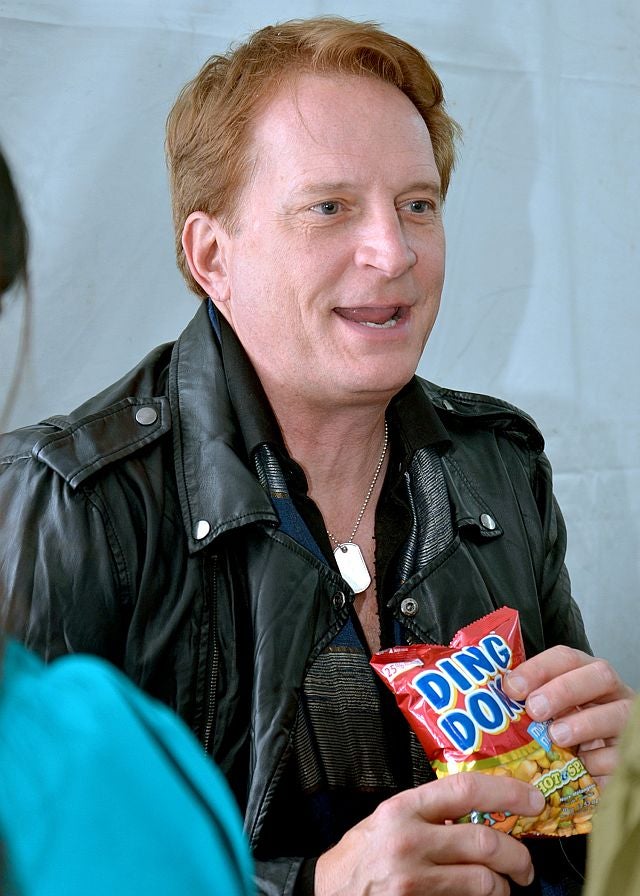 How do you spend Valentine’s Day with your wife?

We are at the show. You know, every guy thinks that whenever my wife sees my show, she gets knocked out… Well, she certainly tells me when I’m awful in a song.

Where do you draw inspiration for the songs you’ve written?

It’s just fascinating to me how songs that I wrote when I was in my early 20s… how they are still relevant today… thinking how knowledgeable I was for such a young man. I was never bitter, and I was youthful. I think that’s one of the reasons—I have a beautiful outlook—for my good health. My doctor says I’m 10 years younger than I should be whenever I get a physical exam.

So how do you do it?

My wife says I drink a lot of water, and that seems to help a lot. Every morning I also have those blends—it could be a raw bean, carrot or spinach—and my kids would ask me why I drink them. It’s not supposed to taste good, but it really doesn’t taste bad.

And no junk food for you?

My junk is… I like salted vinegar potato chips, good cheese, peanut chips. I like burritos every once in a while. And I really like Dingdong—it’s
actually my favorite. (shows a pack of the local snack Dingdong Mixed Nuts). I like the pretzel-kind things. Actually, I love the name, too!

Aside from Dingdong, what do you look for when you are here?

Do you have favorite places here?

It’s the place with the volcano—Mayon. I did a concert there, at Misibis Bay. I remember the volcano had a puffy thing above it, like there was a heavy thing coming out of it. When I arrived, I asked what it meant and they said that it’s an alert level one. I learned that there are three alert levels and the last one means total destruction.

I was like, “Okay!” The place was great… it was like my wife and I were on those magazine photos, you know, those sort of beds on the beach with all the mattresses. We had a massage and we also got to jet ski.

How about here in Cebu?

I remember the concerts. Being on the road is sort of being in suspended animation for 23 hours, and then you come alive, like super animated for two hours, and you just try to restore your energy for the next show. You see, whenever I come down here, I go show, show, show. 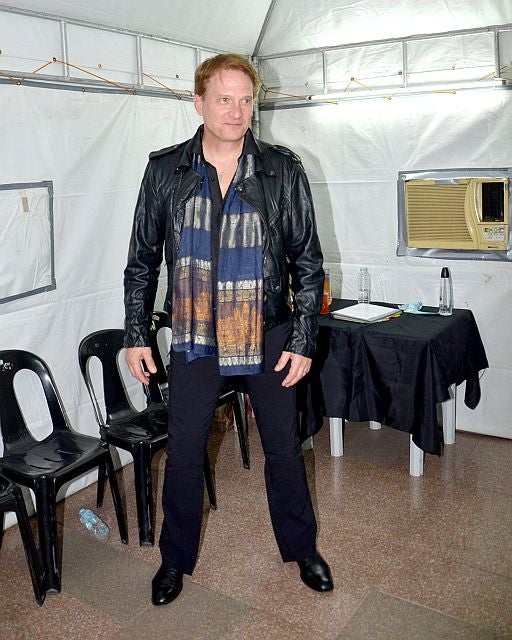 In an interview you said that when you first recorded “You Take My Breath Away” you went to the bathroom right after, and then you cried and knew that it’s going to be a hit. How did you know that?

Success in anything doesn’t come overnight. I’ve been working since I was around 17. No, really I started professionally at 15. By the time I was 17, I was in Atlanta, with the most successful local band, and all my bandmates were around 28 years old, and I had a fake ID so I could work in the club. I spent thousands and thousands of hours singing, working my way up through clubs, where you go and get paid. A guy would occasionally go, “Hey, you did not make any money this week!” And he would pull out his gun and start cleaning it. All the struggle to make
it to New York and get signed. When I recorded for my album, it was also the first day of shooting the first movie I ever made. So I had to get up at five in the morning.

After filming, I went directly to record, and I did that track in one take. My producer said, “We got it!” He told me that it’s all we need. When I listened to it halfway through… I ran and locked myself in the bathroom, and really broke down in the most wonderful way. I just made a record hit. I could tell by the way my producer was looking at me, by the way I sounded, by what was happening… Suddenly, all the stars have alligned. I just knew it would be a tremendous hit.

What do you think is in the song that made it a hit?

It’s organic. The fact that you didn’t have to do a hundred takes. It was a long time ago, but it still has resonance in my life, although I don’t wake up every day thinking about my hits. In the course of making that song, there were people in the mafia, who wanted to own me, and they wanted to get me to sign a lifetime contract, and if I did not sign up, they would kill me. That’s true. So imagine making it through that. I have to go to a district attorney and tell them the story, and the mafia ended up paying me to leave town and they gave me my recordings for free. I have this one-man show “Confessions of a Teen Idol” and there I get to tell the story of how I came about. Imagine a man getting into a supremely wonderful moment of his life, working in a movie and you go and sing one time, through the track.

I think all of that effort was worth it. What you see is just the tip of an iceberg and the real thing is underwater. And JV Decena, the young man who is touring with me… I told him that in this industry there’s no crystal ball that you can look ahead. What has kept me I think is that I’m still curious, just as I was back when I was 23, of what may be, what could be… who knows what’s around that corner, what exciting things could still be out there? You can’t predict the future.

Considering all aspects of your career—as singer, teen idol, getting into Broadway —which one do you find most joy in?

Doing the Broadway thing. I think that has been a very healthy thing for me, and it’s not something that gets reruns on TV. It’s just a point of pride. Sometimes when I’m turning the lights out before I go upstairs, I take a look. I may have got the best posters that are around nine feet tall, and some would tell me to put those things up because here are Broadway antiques… they have withstood winter and they are huge. But I am so grateful. In my life in this treacherous business, I did not end up needing drugs and those things to survive. It’s all been a very healthy life. My backyard is like nothing but birds, hummingbirds and squirrels. It’s like a zoo back there. The thing that really came together for me would be “The Pirates of Penzance” in Broadway. I have done “West Side Story,” I have done

“Sunset Boulevard.” I have a 30-year stint at Broadway.

You said that the peak of your career was one of the loneliest moments of your life. How come?

It’s kind of hard to describe in that era, I was sort of thetail end of what would be an overnight sensation. Aside from the fact that my first movie was shown in four different channels, there was a screening of it before it came out in New York City in a 2,000-seat theater. And I’m just the guy sitting down with my brother and when the lights went out and I stood up, 1,999 people looked at me in a way that they would never looked at me. They looked at me in a different way, and that they never looked at me differently again.

That moment, I remember when I stood up, what occurred right there, I got no idea, it still hasn’t come out yet. But the overnight effect of that was, suddenly all my friends started telling me that I looked different, when in fact I’m just the same as I was yesterday. They have treated me differently because of the effect that was happening around me. I can still remember that Saturday night in New York. It felt like I was on top of the world, at my penthouse, 33rd floor looking at Manhattan. I was sitting on my dining table with my head in my hands. I don’t cry a lot, okay? But I was at that point that I couldn’t meet a girl, that after the second or third time of seeing her, she’s gone. Can anybody just get real with me? Because I became an artificial icon and for some people, it’s the worse addiction in the world—fame. It’s a dangerous drug. I was fortunate enough to live through that thing, But I feel more fortunate that I pulled out of it. And Broadway was the world that I went to. I’m glad that I didn’t stay in that very competitive world because you may come out as a different person. You are flying in private jets, surrounded by adoring fans, and yet it totally feels like a vaccuum. It’s good and I’m just grateful I’m moving towards grace. The hardships, as I always tell my kids, are the building blocks to gratitude and grace.