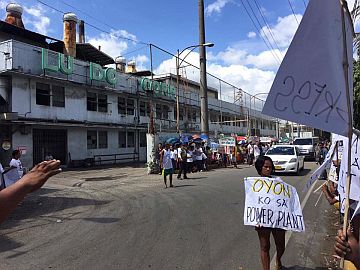 Over a hundred residents from four different barangays staged a rally in support of the proposed 300-megawatt coal-fired power plant in Barangay Sawang Calero, Cebu City on Tuesday morning.

Jossie Antonio, 42, said they were assured by Ludo Power Corp., the private proponent of the project, that it will not cause harm to their health.

(We agree to the project because based on what the people from Ludo told us, it can help our barangay. Our husbands and children who could not finish school may be able to find jobs with the plant)

She recalled that late last year, residents were gathered by officials in the barangay hall where representatives of Ludo presented their project proposal to them.

The residents, who were wearing white shirts and bringing placards that read “Yes to Coal” and “Yes to Progress” among others, gathered as early as 9:30 a.m. in front of Ludo’s existing plant in the area.

Some of the residents were wearing printed shirts with the words “Yes to Progress” in front and “Yes to Ludo Power” at the back.

Last week, some 80 residents and representatives of anti-coal groups also held a protest against the proposal.

More than ten personnel from San Nicolas Police Station were deployed to help maintain traffic and peace and order during the rally.

Read Next
THE COUNT RISES