The sound of (bamboo) music 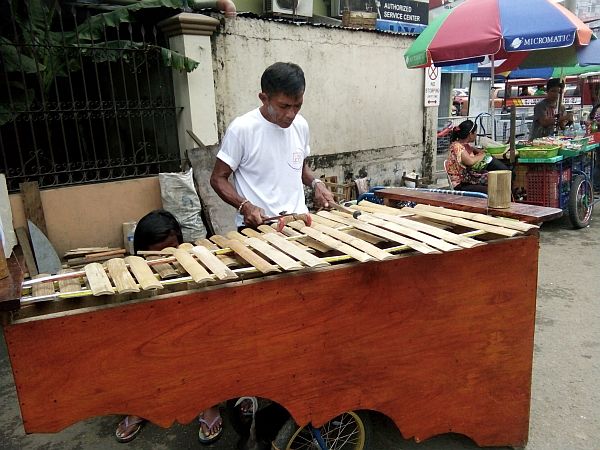 Near the Cebu Metropolitan Cathedral in downtown Cebu City, passersby can hear music wafting through the air.

The soothing sound comes from an instrument called the bamboo xylophone, locally known as “gabbang.”

A closer look, and a middle-aged man is seen playing the crude instrument.

He has made the streets, in this part of the city, his stage.

Anselmo “Doy” Tamparong, 59, would play different instrumental music and love songs to entertain people passing by. Their tips, big and small, are his livelihood.

While other people his age would prefer the comforts of their homes, Tamparong stays outside the church, for at least six hours a day, playing as many songs as he could to entertain as many people as possible.

The Pinamungajan native earns at least P200 a day from playing his gabbang; but his earnings, he said, would reach as much as P1, 200 depending on how generous people get.

“Dili nako ni ika uwaw. Maayo na lang ni kaysa mangawat (I am not ashamed of what I do. This is far better than stealing),” he said.

Tamparong, a widower since 2005, has eight children, the eldest of whom is 38 while the youngest is 14.

Six of his children are married but continue to rely on their “Tatay” (father) for some of their needs, said Tamparong.

A family of musicians

Born to a family of musicians, he preferred to play instruments that were uncommon like his favorite gabbang.

Tamparong developed his love for music when he was only 12 years old.

He accidentally discovered the gabbang while he and his friends were playing, tinkering with bamboos.

“Nagduwa-duwa man gud mi og kawayan sa una, unya na-discover namo nga naa man diay tingog. (We used to play with bamboos, and we discovered that it has a sound),” he said.

The musical instrument is played by striking the bamboo using a wooden mallet.

Widely used among the Yakans, Samas and Tausugs of Southern Philippines, the gabbang consists of a set of trapezoidal bamboo bars of increasing length. The number of bars varies with the ethnic group that made them, ranging from three to 22.

It took him one and a half months to set up the instrument, spending most of that time tuning it.

To make it easier for him to carry the instrument from one place to another, Tamparong mounts the gabbang on a pushcart with two wheels.

“Nagtuo ang mga tawo nga naay speaker sa ilawom kay lanog man ug tingog. Kawayan ra gyud na tanan. (People think that there is a speaker beneath it because the sound is very loud, but these are all bamboo),” he said.

When he is tired from playing the instrument, Tamparong would take a break and rest in the sidecar of his push cart.

At night and with no place to stay in the city, Tamparong takes shelter at the Taboan Public Market in Barangay Pahina Central, a good three-kilometer distance from the cathedral where he plays his instrument each day.

“Lami na gyud unta ipahuway kay tiguwang naman ko. Wala man koy trabaho ug mao ni ang akong panginabuhian. Agwanta lang gyud (I really want to rest because I’m already old, but I have to endure this as this is my only source of income),” he said.

As a fisherman before, Tamparong said that the meager amount that he earned was not enough to feed his children.

He moved to Cebu City with his children in 2008 and began to play his music as the only way to sustain their needs.

He rented a lot along C. Padilla Street in Cebu City and built a makeshift house.

He would frequent crowded areas in the city to play his gabbang.

In 2010, Tamparong traveled with his instrument to Manila, to try his luck there, while he sent his children back home to Pinamungajan.

But things did not work out as he thought they would and so he packed up his things to come home to Cebu last year to be closer to his family.

He found the spot across the cathedral’s gates last July.

“Maayo diri kay dili kaayo saba (It’s better here because it is not too noisy),” he said.

Unmindful of the heat of the sun and sometimes the rain, Tamparong would play his gabbang to the delight of passersby who applaud him.
Public appreciation, he said, boosts his spirit to keep going.

“Mientras makaya pa nako, magtukar lang gyud gihapon ko (For as long as I can still do what I am doing, I will keep on playing),” Tamparong said.

Joel Noquera was passing by the cathedral when he heard the sound of a bamboo instrument.
Noquera stopped to listen.

“I am really amazed. I never thought bamboo can produce such sound,” the 20-year-old told CDN.

Read Next
SC grants lawyer’s bid to be delisted