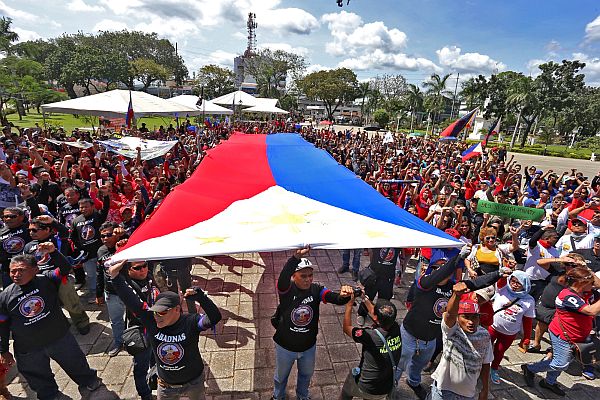 A thousand pro-Duterte supporters hold up a huge Philippine flag as they gathered at Plaza Independencia in Cebu City on Saturday, Feb. 25, 2017, to send message to ‘destabilizers’ that they cannot oust President Duterte.

The commemoration of the 1986 Edsa People Power Revolution that used to showcase the unity among Filipinos became a window into the widening fissure among groups on the opposite sides of the political spectrum.

Within an hour after the pro-Duterte group had dispersed, a smaller group of about a hundred rallyists came, mostly survivors of the Marcos Martial Law regime, calling on the people to “protect” the country’s democratic gains and to be on guard against the possible resurgence of a dictatorship under the Duterte presidency.

Dr. Rowena Burden, the lead facilitator in yesterday’s pro-Duterte rally, however, said the threat was not against the public falling under a dictatorship but against the President because of alleged moves to oust him from office.

“We are here to protect the President and we got his back until 2022. Nobody will unseat our duly elected president without our consent,” Burden said in an opening speech. Burden, following her speech, told reporters they want to send a message to destabilizers that they cannot oust Pres. Duterte.

She said these destabilizers included Senators Leila de Lima and Antonio Trillanes IV, who are staunch critics of the President. De Lima, now jailed over allegations she benefited from the illegal drug trade, is however herself crying foul over allegedly being persecuted by the Duterte administration.

Burden in her speech said that the activity was not a political gathering but a people’s movement to protect the elected president.

“We are exercising our rights. Bisag unsaon pa na nila og bubo billiones ug milliones dili sila katangtang sa president and di ta mosugot (No matter how many billions or millions of pesos they will use, they cannot oust the President and we will not allow that),” she added.

The nearly 1,000 persons who gathered at the park from around 8 a.m. until 4 p.m. were members of about 40 groups from Bohol, Leyte and Davao City, the organizers aid.

Glendol Badon, the national executive director of PDP-Laban who joined the Cebu rally, said the President’s party is squarely behind the reimposition of the death penalty as it believes it is one of the solutions to the unabated criminality and corruption in the country.

He said he has been traveling the country and has received positive response to the reimposition of the death penalty.

“So far, the feedback that we received is good. The people are positive in (their) response (to death penalty),” he added.

Despite critics from the Catholic Church opposing death penalty, Badon claimed he has friends in the church, particularly priests, who support its reimposition. 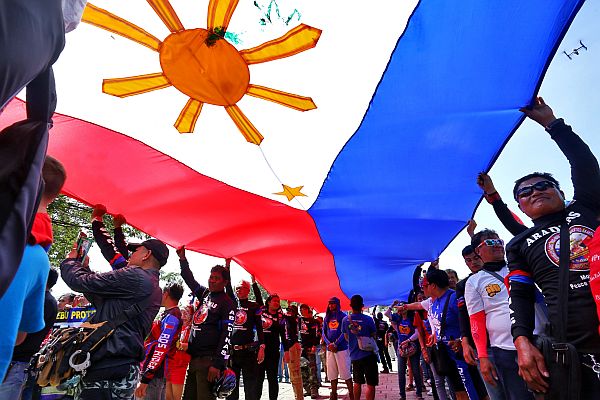 pro-Duterte supporters foist the Philippine flag as a show of patriotism.

Cebuanos, who delivered over a million votes for Duterte in the May 2016 elections, were encouraged by Burden to continue to show their support for President Duterte by making their voices heard: that they would not tolerate any attempt to remove him from office.

A freedom wall was placed at the right side of the stage where supporters signed their names in support to the President.

“Bayan Ko” and “Magkaisa,” the nationalist songs that have been the anthems in past People Power anniversary celebrations, were likewise repeatedly played until the program ended at around 4 p.m. yesterday.

Shortly after the pro-Duterte group has dispersed, another group also assembled at the same place to commemorate the 31st anniversary of the Edsa People Power Revolution.

Wearing black-and-white shirts and bringing protest posters, they called on Filipinos never to forget the dark days of Martial Law and to be on guard against the possible resurgence of a dictatorship.

Although they were small in number compared to the pro-Duterte groups, human rights lawyer Democrito Barcenas said the size of the crowd did not matter.

“Of course, they (pro-Duterte groups) have all the resources. They are supporters of the administration and so they can easily mobilize people. But numbers don’t matter. Numbers don’t determine the success of a government,” he said in an interview.

A Mass celebrated by Fr. Ramon Echica opened the event at Plaza Independencia, followed by a candle-lighting ceremony in memory of the victims of Martial Law.

Among those present during the gathering were members of Akbayan, Sanlakas, Pagtambabayong, The Silent Majority and other militant groups.
Some carried posters that read “Never Again to Dictatorship,” “Level-up Edsa,” “Resist Authoritarian Rule” and “Defend Political Rights.”

Barcenas, who joined in the struggle against the reign of the late President Ferdinand Marcos, urged young people, the so-called millennials, to take the lead in remembering the Edsa People Power Revolution.

“The millennials should keep alive the spirit of Edsa. We must continue the struggle because there are ominous signs that democracy is being threatened by sinister forces,” he said.

“We must be vigilant. We hold this rally to awaken people in the face of threats to our democracy,” he added. 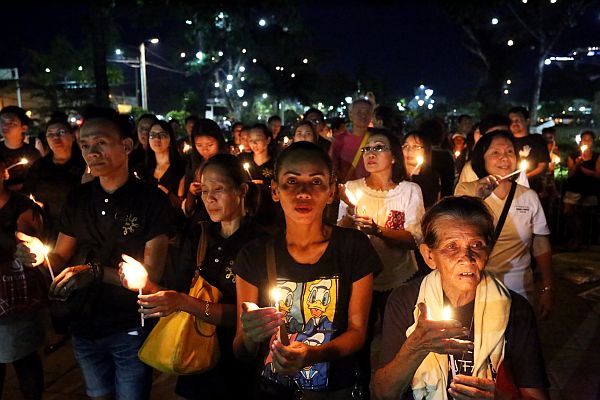 Edsa loyalists light candles to show their solidarity to the spirit of the first People Power Revolution that ousted the late dictator Ferdinand Marcos out of Malacañang.

“The Palace is trying to downplay Edsa, saying we must not get stuck in the past. I think the premise is invalid. We can never move on unless we always remember the struggles of people during Martial Law,” he said.

The Duterte administration decided not to hold any grandiose event to mark the bloodless revolution, saying Filipinos should “move on from just celebrating the past.”

“It was a triumph of democracy and people struggling against President Marcos’ dictatorship which people should not forget,” said Barcenas, who was detained for three months after the imposition of Martial Law in 1972 for joining groups that opposed Marcos.

Lawyer Vincent Isles, president of The Silent Majority Cebu chapter, said the gathering at Plaza Independencia yesterday was meant to commemorate a historic event that brought democracy back and for the people to protect that gain.

“We have a challenge at hand. We are not against Duterte per se. What we are opposing are some of his policies. It’s the right of every citizen to speak up,” Isles said.

Among the policies and plans of the administration which the group opposed are the extrajudicial killings (EJKs) that came with the government’s war against drugs, possible revival of death penalty, the lowering of criminal liability from the current 15 years old to nine years old and political persecution made evident by the arrest of De Lima. 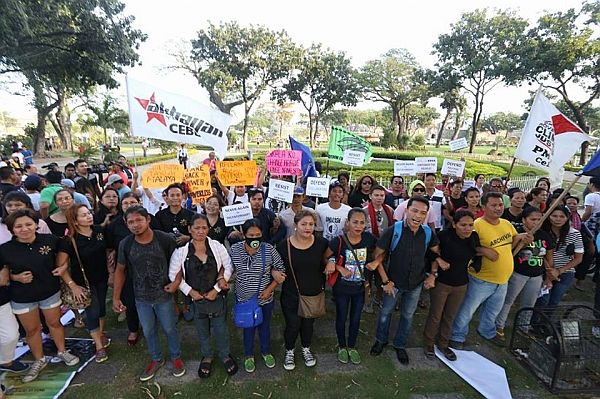 About a hundred protesters who oppose
President Duterte’s policies also gather in Plaza Independencia near the fountain as they
commemorated the 31st Edsa People Power Revolution on Saturday, Feb. 25, 2017.

While there is no evidence to prove that EJKs were sanctioned by the state, Isles said the government has not taken steps to go after the perpetrators.

“We must go back to those values that define us as a people. We are not a people who kill. Unfortunately, Filipinos have not agreed on this one,” he said.

Justine Balane of Akbayan Youth said the killings during President Duterte’s first seven months are worse than the total number of persons killed during the Martial Law from 1972 to 1981. He was referring to a report from Amnesty International which estimated that during Martial Law, 70,000 people were imprisoned; 34,000 were tortured; and 3,240 were killed.

“We are afraid about the resurgence of yet another Martial Law. We must be vigilant and stop any attempts to bring back Martial Law,” Balane said.
Retired Cebu Regional Trial Court Judge Meinrado Paredes said Filipinos, especially young people, should always remember the lessons of history.

“The tendencies of yet another dictatorship are evident: extrajudicial killings, enforced disappearances and turning a deaf ear to advices from other countries,” he told CDN.

“Incidents like these were actually what transpired during the Martial Law. History is repeating itself. We need to be alert so as not to bring back the dark years of history,” he added.

Read Next
If your vagina could talk