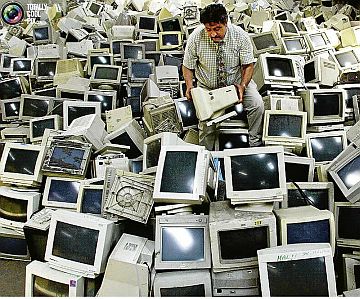 Environmentalists warn that chemicals present in every personal computer that was improperly disposed can seep through the soil and pollute the water supply.
Source: Inquirer.net

A resolution calling on two government agencies to spearhead an information campaign on the proper disposal of electronic waste or e-waste was passed by the Provincial Board (PB) last Monday.

The resolution authored by PB Member Jonkie Ouano of Cebu’s 6th district called on the Departments of Trade and Industry (DTI) and Environment and Natural Resources (DENR) to spearhead efforts to inform the public on how to dispose of e-waste.

Ouano said Metro Cebu has a lot of stores selling surplus electronics that can be recycled or disposed.

He said those that cannot be used anymore are not disposed properly, resulting in toxic wastes that can make their way to the soil or water sources, polluting the immediate environment.

Ouano said co-mingling electronic devices that can be recycled with those that should be disposed should be avoided to prevent hazards such as fires due to overcharged units.

“Proper disposal of old cell phones, computers, TV sets, radios and other electronic products should be practiced since they are potentially harmful to persons and the environment,” Ouano said.

Cuñado said they are monitoring and slowly regulating junk shop operators on how they dispose of their electronic products.

Provincial DTI director Nanette Arbon said she needs to secure a copy of the PB resolution so they can see their role in the campaign.

In a related development, Ouano said the PB can file a resolution condemning the dumping of wastes from South Korea to a lot in Mandaue City.

“The Mandaue City government, the DENR and the Bureau of Customs already did their part. Of course, we condemn the act,” he said.

About 25,000 metric tons of waste from South Korea was uncovered by the Bureau of Customs in the Cebu port on board the MV Christina that arrived in the country last Jan. 21.

Some of these wastes were dumped at a privately owned lot in Mandaue City late last month.