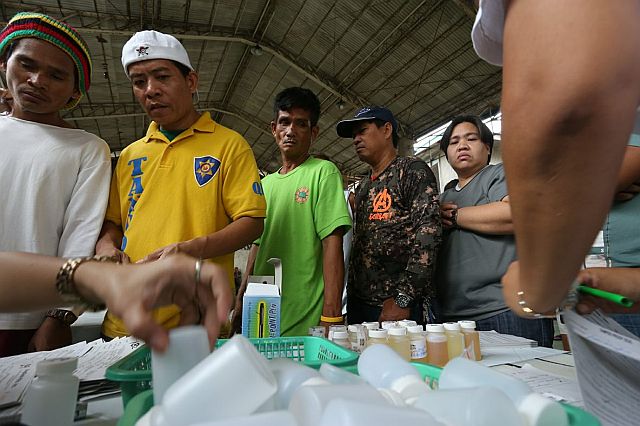 Tanods and garbage loaders were made to undergo a surprise drug test on Tuesday morning. (CDN PHOTO/JUNJIE MENDOZA)

According to Cebu City Office for Substance Abuse Prevention (Cosap) head Dr. Alice Utlang, a total of 101 tanods and loaders from the four barangays were present for the drug testing that was conducted at the sports complex of Barangay Sambag 1.

Based on their records yesterday, Utlang said one worker from Barangay Pahina Central was not present during yesterday’s testing.

“Those who were not present will be deemed positive unless they have a valid reason,” Utlang said.

Those with valid excuses will be subjected to another testing in another schedule which will not be disclosed by Cosap.

The drug testing is mandated under a city ordinance which requires a yearly testing for city government employees and barangay workers.

It is also part of an ongoing evaluation being conducted by the City Hall on tanods and loaders whose incentives from the city government were earlier suspended by Mayor Tomas Osmeña.

Utlang said the results of the drug test will be known today. The results will be subjected to confirmatory tests.

Including yesterday’s batch, the city has already conducted drug tests in 14 out of the city’s 80 barangays.

According to Cebu City Councilor Dave Tumulak, deputy mayor on police matters, the drug testing will form part of the city’s evaluation of barangay tanods and garbage loaders.

He assured that the city will release the allowances again after all barangays are evaluated.

Aside from the drug testing, the city is also reconciling records of the workers, comparing those in City Hall to those in the barangay’s list.

The workers will also be required to submit monthly accomplishment reports as part of their evaluation.

Read Next
3 arrested after robbing Korean