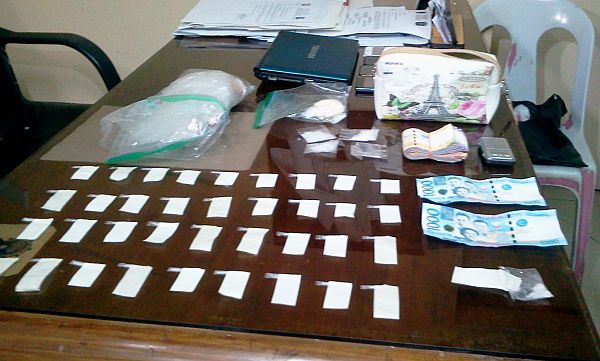 Packs of shabu confiscated by police in the latest string of drug operations in the province following the resumption of the PNP’s all-out war against illegal drugs.
CDN PHOTO/Norman Mendoza

While their kingpin reportedly remains in custody at the police national headquarters in Camp Crame, the underlings of self-confessed drug lord Franz Sabalones have kept their trade going in southern Cebu as though things were normal. And Talisay City police have P385,000 worth of illegal drugs to show.

In a buy-bust operation on Wednesday, police confiscated 40 grams of shabu (methamphetamine hydrochloride) from a father and son tandem who are allegedly part of the Sabalones drug network.

The buy-bust operation conducted in a drug den in Sitio Hawod, Barangay Bulacao, Talisay City led to the arrest of 25-year-old Norman Bacus alyas “Oman” and his father, Serveliano, 51.

According to SPO3 Vincent Taladua of the Talisay City police, the arrests were made after conducting a week-long surveillance on Oman.

They did not resist arrest.

In the adjacent town of Minglanilla, a man was killed in what police believed to be another drug-related incident in that southern municipality.

Edgar Acenas, a 39-year-old resident of Barangay Boot, Cebu City, was shot dead by an unidentified assailant in the mountains of Campo 7 Minglanilla, Wednesday night.

The victim’s backpack, recovered at the scene, was found to have drug paraphernalia, prompting Minglanilla police to believe that the killing was drug related.

PO2 Taher Rajav of the Minglanilla police said that a full investigation was underway even as residents said that they were not familiar with the victim and if he was a constant visitor to the place.

According to a witness, Acenas had just finished fixing his motorcycle after it conked out in the area when another motorcycle-riding man shot him at close range just as the victim was about to head back to Cebu City.

Danilo Pangatungan, 33, of Barangay Maribago, was caught with four packs of shabu and P1,200 believed to be his proceeds from selling illegal drugs.

The drugs confiscated from Pangatungan and Lagare which weighed 9.05 grams were valued at P106,790.

Police also arrested brothers Rolie and Romeo Dungog in Barangay Canjulao and Lucio Sagarino in Barangay Agus in another round of police operations in Lapu-Lapu City which yielded 14 small packs of shabu.