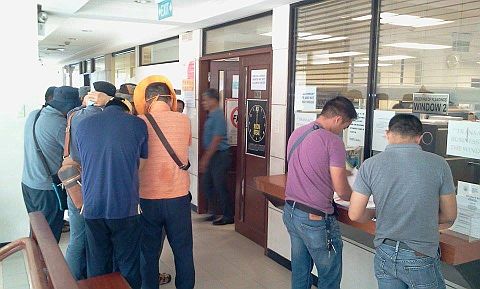 The seven Koreans are in a huddle, covering their faces during the filing of the charges against them at the Lapu-Lapu Prosecutor’s Office. They were charged with the “Use of Trafficked Persons” on Monday last week.
CDN PHOTO/NORMAN MENDOZA

The seven South Korean nationals who have been entangled in a sex tourism scandal barely two weeks ago have reportedly fled the country.

The report prompted Vice Governor Agnes Magpale to set up a meeting next Monday with the National Bureau of Investigation (NBI), the Bureau of Immigration, several presidents of different Korean associations in the area, as well as with the Korean consul general to discuss what actions to take against the Koreans if the report is proven true.

Special Agent Arnel Pura of the National Bureau of Investigation in Central Visayas (NBI-7) said the seven Koreans, who were charged with “”Use of Trafficked Persons” before the Lapu-Lapu City Prosecutor’s Office on Monday, posted P120,000 bail on Tuesday.

They were arrested last Friday or March 3.

Nine Koreans were arrested, but only seven were charged. The two others were not charged because, according to the NBI, during the raid they were not with their Filipina sex escorts.

The other two who were not charged were Namgyun Shin and Byeonghae Park.

Pura said that after the foreigners posted bail and their office received the order of release on Tuesday, they immediately delivered the Korean nationals to the Bureau of Immigration as the NBI’s task covers only the criminal aspect of the situation.

Another source from a government agency (who asked not to be named), however, confirmed the report of the Koreans having already left the country and said that the Koreans left the Philippines last Wednesday on a 3:45 p.m. Cebu Pacific flight bound for Seoul, South Korea.

Magpale said that they failed to secure a hold-departure order on time against the Koreans because the events that unfolded happened quickly.

She said the approval of the bail and the order of release included a travel restriction that was apparently not heeded by the foreigners.

They applied for bail. It was allowed by the judge, but it was provided that their travel is restricted. They have to inform the court if they want to travel, which they did not do since they left the country immediately, she said in Cebuano.

At present, Magpale said that they are consulting with lawyers to see if they can have the Koreans extradited based on the extradition treaty between the country and South Korea and to see if trafficking is among those extraditable offenses.

“We are consulting with our lawyers right now. That’s why I’m having a meeting with the Korean consul because if we have an extradition treaty, we can have them arrested. We had already filed the case here. That’s what our lawyers said. Just the same, we will push through with our meeting invitation. We will let the consul general know what we would be doing,” she said in Cebuano.

Police attaché of the Korean consulate, Lee Yongsang, when sought for comment, said in a text message that the Korea Police Agency had already launched an investigation into the incident.

“For your reference, Korea Police Agency had already launched an investigation against the nine Koreans,” Lee said.

“And we, Korean Consulate, will relay a court request to nine Koreans if it is needed,” said Lee.