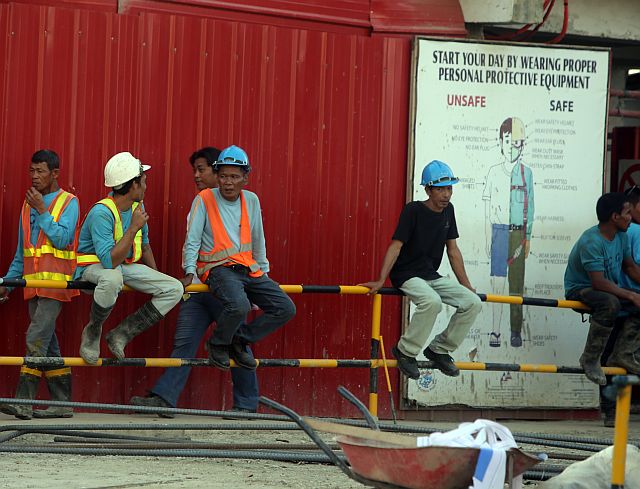 Workers take a break in a construction site in Cebu City. The Visayas remains to be among the regions with high employment rates. (CDN PHOTO/TONEE DESPOJO)

While jobless rates were up in most parts of the country, Central Visayas, particularly Cebu, seemed unfazed by developments in the labor force.

Latest figures from the Philippine Statistics Authority (PSA) showed that the region’s unemployment rate was at 4.6 percent in January 2017, lower than the national average of 6.6 percent in the same period, as well as the recorded regional rates in October 2016 and January 2016 at 5.1 percent and 5.7 percent, respectively.

“Many factors could have contributed to this, including the region’s ability to generate employment opportunities. Migration is also one factor since we are at the center of Visayas and near the northern part of Mindanao. We are the center of development,” Department of Labor and Employment Central Visayas (Dole-7) director Exequiel Sarcauga told Cebu Daily News.

According to the latest Labor Force Survey (LFS) of the PSA, unemployment rate in the whole country jumped to 6.6 percent in January 2017 from 5.8 percent in the same month last year and 4.7 percent in October 2016.

But Central Visayas remains to be among the regions with high employment rates.

Sarcauga said the “fish go to wherever there is food,” referring to those from other regions migrating to Central Visayas to live and work.

However, he said this was only a general statement of observation considering there is no concrete investigation on the matter.

National Economic and Development Authority Central Visayas (Neda-7) Director Efren Carreon, in an earlier interview, said he was also very upbeat about 2017, adding that increased spending in infrastructure will be an opportunity for development among the regions.

The agency projects Central Visayas’ Gross Regional Domestic Product (GRDP) to grow between 6 to 7 percent in 2016 from 4.8 percent in 2015, said Carreon.

Neda-7 targets to release the Central Visayas 2016 GRDP report in May this year.

Carreon said the agency only targets the GRDP to grow between 5.6 to 6.1 percent in 2016, but they are confident they will exceed their goals due to marked improvements in power consumption, exports, and construction, among others.

Melanie Ng, Cebu Chamber of Commerce and Industry (CCCI) president, gladly noted the drop in unemployment in Central Visayas, saying that this goes to show that there is increased economic activity in the region.

“The chamber continues to aggressively identify and promote business investment opportunities because this will ensure job creation and inclusive growth,” she said in a text message.

CCCI has over 750 member businesses, composed of micro, small, and medium-scale enterprises (MSMEs) as well as large corporations based in Cebu.

In the whole country, 99.6 percent of registered businesses are MSMEs, employing around 70 percent of the total labor force of the Philippines.

Nonetheless, jobless rates across the country are expected to rise as the work force welcomes new graduates this month.

Dole-7’s Sarcauga said this was the normal trend at the end of the first quarter of each year.

“That is the time a school year ends, so this is the general trend. But if you can observe, it (unemployment rate) will simmer down during the later quarters,” he explained.

In anticipation of the increase in the regional unemployment rate by the end of March, Sarcauga said the labor agency has earlier coordinated with different schools to provide additional services to graduating students in the form of job fairs.

“Many schools have job fairs lined up for their graduating students this month. We also provide labor market information on in-demand jobs, hard-to-fill jobs, and jobs available,” he said.

Sarcauga said the prevailing in-demand jobs in the region are from the services sector including those in hotels, restaurants, and the information technology-business process management (IT-BPM) sector.

Construction, he said, should also be in need of more workers especially due to the government’s thrust to ramp up infrastructure spending under the Duterte administration.

Highly technical jobs such as welding, programming, and others that need more specific skills are harder to fill, said Sarcauga.

Among these reasons are: tired or believed no work was available; awaiting results of previous job application; temporary illness or disability; bad weather; and waiting for rehire or job recall.

In a statement on Tuesday, Neda said the employment rate of 93.4 percent translated into 39.3 million employed Filipinos in January, lower than 40.6 million employed in the same month a year ago.

Socioeconomic Planning Secretary Ernesto Pernia, in an Inquirer report, said the rise in jobless rates in the Philippines was attributed to the impact typhoons that ravaged the country at the end of 2016 and early this year had on jobs.

Employment losses were noted in the agriculture sector, which was affected by typhoons Nina and Auring that hit the country in December and January.

Pernia pointed out that the agriculture sector accounts for the largest share of total employment at 25.5 percent, shedding an estimated 882,000 workers or two-thirds of the employment losses.