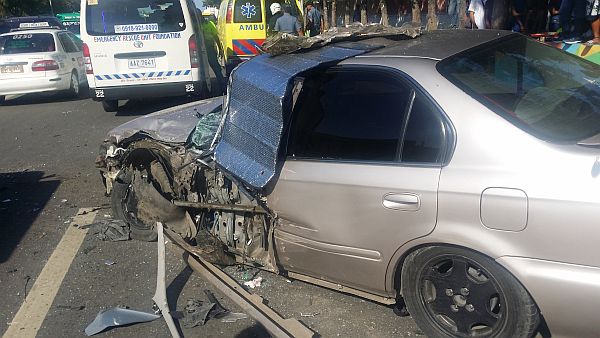 A silver Honda Sedan blocks the road near the Mactan Export Processing Zone along Barangay Pusok, Lapu-Lapu City after a head-on collision with a Toyota Innova that turned turtle twice. Witnesses said it was a miracle that no one was badly injured in the incident.
Edison delos Angeles

STALLED motorists passing through Barangay Pusok, Lapu-Lapu City had to make a double take upon reaching an area near the Mactan Export Processing Zone (MEPZ I) at around 2 p.m., Sunday.

On the road were two badly damaged vehicles, a silver Honda Sedan and a gray Toyota Innova, that figured in a head on collision that many guessed would have caused serious injury or death.

But at the scene of the traffic collision were five badly shaken passengers of the car driven by 21-year-old Keanu Francis Yu of Banawa, Cebu City, all with just minor bruises and sprains.

It took around 30 minutes for Yu to be carefully pulled out from the wreckage of his car as both his feet were stuck. While waiting for rescuers, he chewed a gum – to calm his nerves.

On the other side of the road – the equally shaken driver of the SUV, 39-year-old Arnel Leswe of Saac II, Lapu-Lapu City, and a male passenger.

Witnesses said the impact of the collision brought the Innova up in the air, turning upside down twice before landing back on the ground.

The drivers and passengers refused to answer questions, and asked to be brought to the nearby Mactan Doctors Hospital for treatment of their injuries.

“According to our investigation, the Innova went out of it’s lane and went to the lane threaded by the silver Honda sedan,” said Gabule.
Only a miracle could have saved all of the passengers, witnesses said.