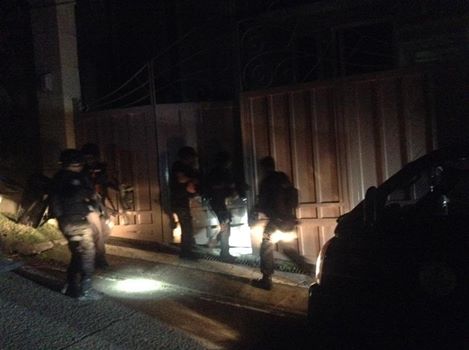 Members of the Special Weapons and Tactics (SWAT) team of the Cebu City Police Office raids the home of David Lim Jr., the alleged road rage shooter, on Sunday night, March 19, 2017, in this photo posted on the Facebook page of Cebu City Mayor Tomas Osmeña.

CEBU CITY—The police raided on Sunday night a condominium unit and a house in Maria Luisa Subdivision in Cebu City in search for the scion of a Filipino-Chinese businessman who shot a nurse in a fit of anger following a traffic altercation earlier in the morning.

He said they talked to David’s parents who claimed they didn’t know where their son was.

“They allegedly don’t know where their son is. But they are willing to coordinate with the police. As of now, we are conducting a hot pursuit operation against David Jr.,” he added.

The raids on the condominium unit and a house in Maria Luisa Subdivision were conducted without a warrant but on orders of Cebu City Mayor Tomas Osmeňa who accompanied the raiding team.

In a post on his FaceBook page, the mayor said he applied for an arrest warrant but a judge refused to grant him one.

“The judge has refused to issue me a warrant of arrest. I have ordered SWAT to execute the raid on David Lim’s house. I accept all legal responsibility,” he wrote in his post which garnered more than 8,700 likes and 2,054 shares as of 10:53 p.m.

The comment section of his post, Osmeňa said he informed Mr Duterte through a text message he sent to Secretary Bong Go, special assistant to the President.

“Hi Bong, fyi lang, tonight I personally raided the house of David Lim, brother to Peter. His son was captured on video this morning shooting a nurse.

The judge in Cebu refused to issue a warrant of arrest and the police refused to move with no warrant until I threatened to perform the raid by myself,” he wrote.

“Please tell the President that I need help getting an arrest warrant ASAP so a hold departure order can be placed. This is beyond me na. Need help,” he added.

He also wrote in another post that they were expanding the search to one Tamae Takahashi, who was allegedly the companion of David during the road rage shooting.

David Jr is the nephew of Peter Lim. His father, David Sr. is the youngest of the four Lim siblings.

The eldest is Peter who gained national prominence recently after President Duterte identified one Peter Lim as among the biggest drug lords in the country.

Peter met with the President to deny that he was the Peter Lim referred to in Mr. Duterte’s drug matrix.

David Sr. figured in a traffic accident last March 4 when his Nissan GT-R sports car hit a motorcycle and killed the rider, a fish dealer on his way to buy fish to sell in the market.

Interviewed in his hospital bed, Nuñal said that he came from a party and was bringing home his friends home when he was following a Mercedes Benz that was criss-crossing the road. The luxury vehicle then stopped in the middle of the road.

He honked his horn to call the attention of the driver who later got out and was seen arguing with his female companion who was went out of the car.

He later identified the man sa David Jr. based on the photograph shown to him.

The man, who appeared drunk and whose face flushed angrily, tried to punch Nuñal but the latter managed to parry the blow, prompting the suspect to go back to his car and get his gun.

Nuñal said he didn’t see the gun at first because his view was blocked by the woman who was pleading to the man to calm down.

The man, however, brushed aside the woman and pointed his gun at Nuñal before shooting him several times.

“Nibarog ra g’yud ko. Wala ko kita nga nagdala na siya sa iyahang pusil kay natabunan siya sa babaye. Didto nako kita nga naa siyay pusil pag-isa niya sa kamot and shot me (I was just standing there. I didn’t see that he had a gun because he was blocked by the woman. I only saw the gun when he raised his hand and shot me),” Nuñal said.

Although wounded, Nuñal grabbed his phone inside the car and took a photo of the plate number of the Mercedes Benz as it sped off.

The police later recovered two slugs of a .22 caliber pistol and a live ammunition from the crime scene.

Known to both victim and shooter that a motorist took a video of the incident. The same motorist took Nuñal to the hospital because none of his two companions knew how to drive.