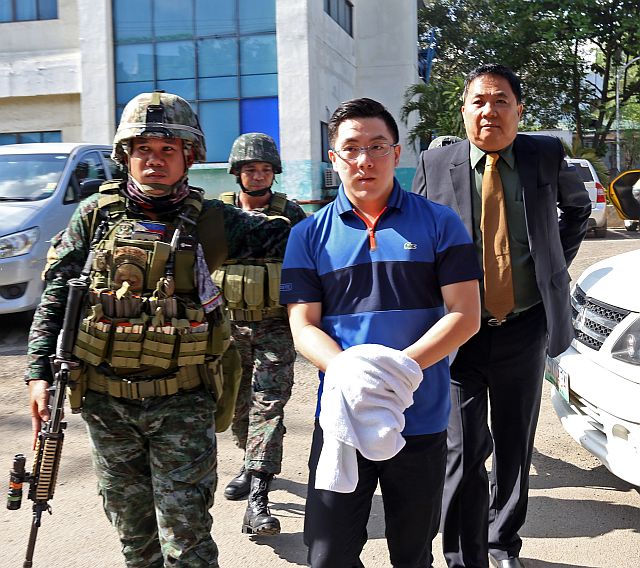 a heavily guarded Lim hides his handcuffs with a towel as he is brought to the Cebu City Prosecutor’s Office for inquest proceedings. (CDN PHOTO/JUNJIE MENDOZA)

“Sa atin walang mahirap o mayaman. Lahat ay parehas (For us there is no rich or poor detainee. All of them are equal),” said Senior Supt. Joel Doria, director of the CCPO.

Police on Tuesday filed against David Jr. charges of frustrated murder, illegal possession of ammunitions, and a violation of articles 275 of the Revised Penal Code which penalizes any who “fail to help or render assistance to another whom he has accidentally wounded.”

Impleaded in the complaint filed before the Cebu City Prosecutors’ Office was David Jr.’s girlfriend Tamae Takashashi, a law graduate, who fled with him shortly after he repeatedly shot and wounded Ephriam Nuñal, a nurse, following a traffic altercation on F. Sotto Street in Barangay Kamputhaw, Cebu City, last March 19.

David Jr. turned himself over to Chief Supt. Noli Taliño, director of the Police Regional Office in Central Visayas (PRO-7), past 2 a.m. on Tuesday, accompanied by his mother Bebong, sister, brother-in-law, and lawyer Orlando Salatandre Jr.

It was a kind of surrender that would not have been possible if Lim did not belong to a privilege class, as it was arranged by a Palace official, an arrangement that caught by surprise Cebu City Mayor Tomas Osmeña and the CCPO, both of which had been in pursuit of Lim.

While most Cebuanos slept, Lim Jr. turned himself over to Taliño in a surrender facilitated by Secretary Christopher “Bong” Go, the special assistant of President Rodrigo Duterte.

Go said it was Davao-based businessman Peter Go who brought to his attention the concerns of Lim Jr.’s mother. Go said he was not in any way related to the businessman but said he was a longtime friend of him and President Rodrigo Duterte.

He said Mrs. Lim called him and he advised her to surrender her son to the regional director of the PNP in Cebu, referring to Taliño. 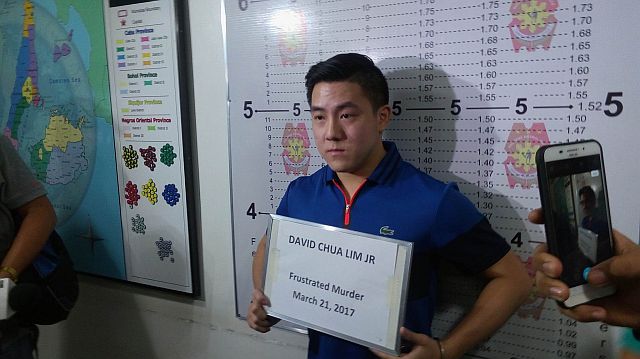 Go, speaking to the Inquirer while in Bangkok in the company of President Duterte, said he was only showing goodwill when he facilitated the safe surrender of David Jr. and ensured that justice is served to the victim.

He said there was nothing more in his gesture but goodwill.

But where is Peter Lim? Asked whether he knew the whereabouts of the suspected drug lord Perer Lim, Go replied he had “no idea.”

The older Lim has been named by Duterte to be behind the illegal drug trade in the Visayas.

Duterte and Lim met in July 2016 in Davao City. No case, however, has been filed against Lim.

Where is the gun?

David Jr. did not bring with him the .22 caliber gun which was used in shooting the victim. Salatandre claimed David Jr. panicked and eventually lost the gun after the incident.

“He must have misplaced it. Of course, there’s fear. It’s not easy to be in his position,” the veteran lawyer explained.

Since the gun was not recovered, the police opted not to file a case for possession of illegal firearms against David Jr. even if he was seen in a video of the road rage incident carrying an unlicensed gun.

“For now, we don’t have the physical evidence, which is needed in filing a case,” Doria explained.

He said they are entertaining the possibility of asking the court to issue a search warrant so they can find the gun as well as open David Jr.’s Mercedes Benz, which the suspect drove home after the incident.

When presented before the prosecutor yesterday, Lim, 28, chose to waive his right to a preliminary investigation, which could have given him the chance to refute the allegations.

Salatandre said they would opt to immediately post bail and answer the accusations in court. 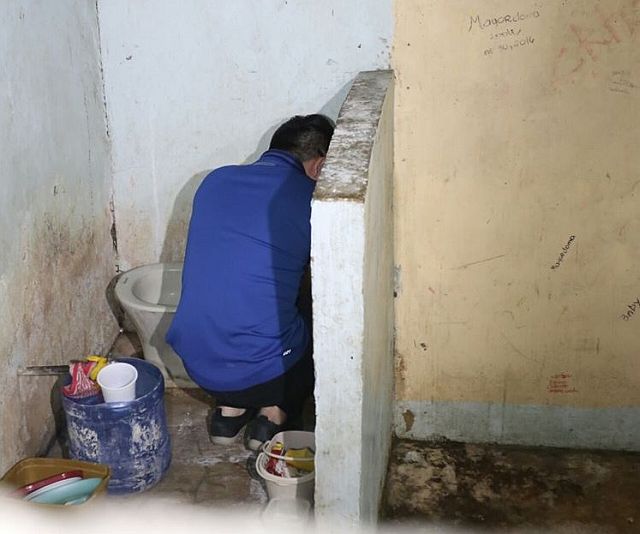 David Lim Jr. tries to hide an emotional moment at the toilet area of his detention cell.

Assistant City Prosecutor Ma. Theresa Casiño is set to issue today a resolution on whether or not there is sufficient basis to indict David Jr. and elevate the charges against him before the court.

Salatandre questioned why his client was subjected to an inquest proceeding — a mandatory procedure following an arrest, as they had expected him to stay at PRO-7.

“We brought him (David Jr.) to PRO-7 for safekeeping. It’s been three to four days now since the incident happened. A warrantless arrest is no longer available for the police. We went to PRO-7 just to seek shelter amid threats to my client’s life,” he explained.

He also opposed the decision of the CCPO to detain David Jr. at an ordinary stockade.

“This is not an ordinary case. There have been threats, and what is one night to let him just stay at PRO-7 to ensure his safety?” Salatandre said.

Doria and Supt. Ryan Devaras, chief of the Investigation and Detective Management Branch of the CCPO, insisted that David Jr. be placed at the CCPO stockade.

At around 5 p.m. yesterday, David Jr. was brought to the CCPO, escorted by at least four operatives of the Special Action Force (SAF) in full battle gear.

After undergoing a medical examination, a procedure before a suspect is detained, he was locked alone inside a detention cell supposedly intended for female detainees but was vacant yesterday. Adjacent to his cell was a stockade that had six male inmates.

David Jr. was separated from other detainees as he was considered a “high-risk” inmate due to the threats against him, said Devaras.

The CCPO stockade was guarded by at least 10 SAF policemen.

“You have nothing to worry. You are safe just like any other prisoner. In any stockade, we have personnel to secure you,” he said. 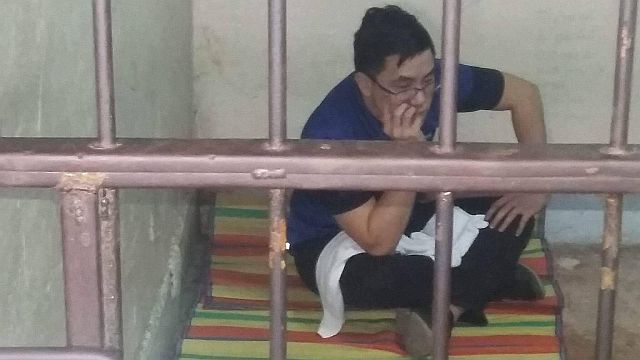 Doria would have also wanted David Jr. to wear the mandatory prisoner’s shirt but later decided to let Lim wear his own shirt.

Devaras explained that wearing of prisoner’s shirt is needed only during the taking of mug shots and not when the detainee is already in jail.

Lim, speaking to reporters for the first time to answer the accusations, dismissed claims that his Mercedes Benz was crisscrossing and stopped in the middle of the road, prompting two other cars behind him to honk their horns.

“I wasn’t doing a zigzag. Two cars kept honking on my back. They know that. I felt like ‘what’s going on?’ I had to go down the car. When I went down the car, they kept shouting at me until we got into a fist fight. I saw that he (victim) has more than one or two companions,” he said.

“When their male companions went down the car, that’s when I felt threatened. I fire a warning shot on the ground as you can see on the video. He (victim) directly went to me. I had to restrain him before he could get the gun from me,” he added.

Nuñal, in his affidavit, however, stood by his initial statement that it was Lim who, after crisscrossing on the road, suddenly stopped and went down his car.

“He was roused to anger, kicked my vehicle, and punched me. I was able to parry or move my body so I was not hit. He (David Jr. ) went back to his vehicle, got a firearm, and shot me. He aimed the gun at me and hit me first on my right ankle and second the left thigh,” Nuñal said in his affidavit.

Nuñal said Lim’s female companion, who turned out to be Takashashi, tried to pacify him before they both left on board Lim’s car.

Nuñal’s statement was corroborated by two witnesses who claimed to have seen the incident.

One witness was on board a car whose dash board camera captured the road rage incident. The other was on board another vehicle who happened to pass by the place where the commotion happened.

The police withheld their identities for security reasons.

Devaras said they originally decided to file charges of frustrated homicide against Lim but Nuñal’s private counsel, lawyer Mundlyn Misal-Martin, asked them to instead file a frustrated murder case against the suspect who allegedly has the intent to kill Nuñal.

Both cases are bailable although frustrated murder is more serious than the other.

He explained why he decided to put him at the RID office instead of having him jailed.

“He was not arrested. He surrendered so we needed to conduct an investigation. While doing so, he has to stay at the RID office. We could not conduct him while he’s in prison,” he explained.

Taliño admitted the Lim family requested him not to put David Jr. in an ordinary stockade while the charges are being prepared.