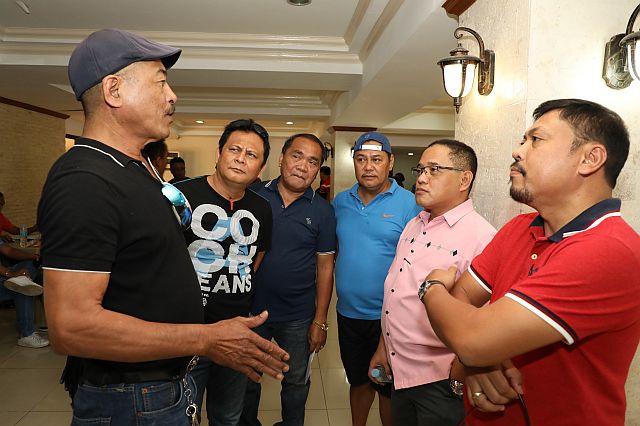 They were called to a meeting, but 57 Cebu City barangay captains instead found themselves peeing for urine samples that were to be given in a surprise drug test conducted on them.

Once the captains were at the venue, Zafra announced the drug test.

“We also want that by March 30, during our meeting with Director Lapeña, we will be able to boast that us barangay captains, we are already doing our own internal cleansing in Cebu City,” Zafra told reporters.

The test was conducted by the Cebu City Office for Substance Abuse Prevention (COSAP).

However, unlike the other tests conducted by COSAP before, the barangay captains were told about their respective results immediately after the tests as a way to show that there were no shenanigans involved.

Confirmatory tests have yet to be conducted on the results.

Zafra, Utlang, and Cebu City Councilor Dave Tumulak, also the deputy mayor on police matters, witnessed the proceedings.
Utlang refused to say if any of the barangay captains tested positive in the drug test.

She said that the results will only be revealed, within two weeks to a month, once they are done with the confirmatory tests.

Utlang’s new procedure in releasing the test results followed last year’s controversy over the drug test result of Busay Barangay Captain Amilo Lopez who initially tested positive in a drug test, only to be found negative of prohibited substances after the confirmatory test.

In the drug test yesterday, Lopez asked to be spared from it on account of his “phobia and trauma” from last year’s incident.

Lopez offered to have his drug test done in another government-run drug testing center together with representatives from the city government to witness the procedure.

He planned to do it within today.

While Zafra granted Lopez the exemption from the COSAP test, saying that he understood the Busay barangay captain’s fears, Utlang said that as far as COSAP was concerned, any drug tests done outside COSAP by city employees and barangay officials will not be recognized.

“If it’s not from us, we will not accept it. Even if your result is negative, it does not mean you do not have any history. Maybe you just don’t have it at that time. Whatever is the result of his test (outside), that will not be the official one,” Utlang said.

As for the 23 barangay captains who were unable to join Wednesday’s drug test, Zafra said another testing may be done today if agreed upon by him, Tumulak and Utlang.

The captains were informed of the gathering only on Monday, prompting some of them to skip the meeting due to the short notice.

Labangon barangay captain Victor Buendia, who is currently serving a suspension, was also not around.

Rupinta chose to attend the gathering as he told reporters that he was not aware if anyone from his barangay would be attending.

Rupinta, along with his entire barangay council, was placed under a six-month preventive suspension beginning January for their alleged failure to cooperate with the PDEA during a drug raid conducted by the anti-narcotics group in Ermita last year.

“I did not know that there will be a drug test. But I am still thankful. I have been requesting this for our barangay before. This can also be a barometer if the barangays have been successful in the anti-drug campaign. This is good,” Rupinta said in Cebuano.