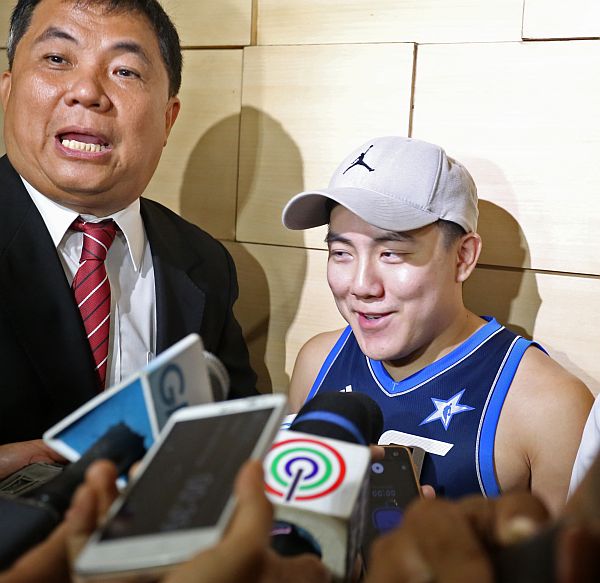 FREE AT LAST: Lawyer Orlando Salatandre Jr. (left) and David Lim Jr. had every reason to smile yesterday after Lim posted bail and was ordered released by the court.
CDN PHOTO/JUNJIE MENDOZA

David Lim Jr. posts a cash bond of P144,000 after being indicted of frustrated homicide and possession of ammunition

The 28-year-old scion of one of the wealthiest families in Cebu City was released from police custody at 4:35 p.m. on Thursday shortly after he posted a total of P144,000 bail in court to secure temporary liberty pending the resolution of the charges filed against him.

“I would just like to thank everyone who has been there for me, who supported me, who believed in me, and most importantly who prayed for me all this time,” he told reporters in a short interview facilitated by his lawyer.

“I just would just like to tell everyone that the truth shall prevail. Thank you very much,” he added without elaborating.

Lim was accompanied by his sister, brother-in-law, and lawyer.

The police originally filed frustrated murder charges against Lim upon the advice of the victim’s lawyer.

But Casiño downgraded the charge to frustrated homicide since it was not proven that there was treachery on the part of the accused in shooting Nuñal, hitting him in the left thigh and right ankle.

“A judicious examination of the evidence at hand would show that there are (sic) not sufficient basis to prove the existence of any of the circumstances stated therein (murder case),” said Casiño whose resolution was approved by Cebu City Prosecutor Liceria Lofranco-Rabillas past 11 a.m. on Thursday.

“Considering that the accused is now out on bail, he can do whatever he wants. I vehemently request for tighter security for my client as well as for our witnesses. Hopefully, he will not resort to a more violent act,” she told Cebu Daily News.

As Lim’s camp was processing his bail, Martin also filed a request before the Bureau of Immigration to put the name of the accused in the derogatory system to alert the police or the National Bureau of Investigation in case Lim would leave the country without the court’s permission.

She said they will also file a formal pleading in court for the issuance of a hold departure order against Lim.

“If ever he wants to go out of the country, he must first ask the permission of the court. Otherwise, he will be arrested by immigration officers,” Martin said.

When Lim went in hiding after the shooting incident, the Department of Justice placed him on its lookout bulletin to alert law enforcers should he travel abroad.

Lim’s lawyer Orlando Salatandre assured the court and the public that Lim would not run away from the charges filed against him.

“He will face the cases against him. His family is here, and now that he’s out on bail, there’s no reason to transgress or walk above the law. He has a lawyer. We prepared our defense, and you will see it as the case progresses,” he said.

For now, Salatandre said his client needs a break to give himself a rest after a grueling three-day experience under police custody.

“He needs to take a rest at home. What he underwent was not easy. Of course, to be placed behind bars was something unusual,” he said.

Lim was locked at the Cebu City Police Office (CCPO) stockade at around 8 p.m. on Tuesday, hours after he turned himself over to Chief Supt. Noli Taliño, director of the Police Regional Office in Central Visayas (PRO-7), upon the advice of his lawyer and family.

He was brought out of prison at around 1 p.m. on Thursday after the prosecutor’s office released its resolution and ordered the filing of the charges against Lim in court.

The cases of frustrated homicide and illegal possession of ammunition against Lim were raffled off to Judges Ricky Jones Macabaya of the RTC Branch 5 and Alexander Acosta of Branch 9 respectively.

Macabaya and Acosta ordered Lim’s release after the latter posted a cash bail bond in court.

Macabaya set the arraignment on Lim’s frustrated homicide case on April while Acosta scheduled the proceedings on the illegal possession of ammunition charge on April 24.

Salatandre said he’s contended with the ruling of the prosecutor’s office on Lim’s case.

“We’re happy and thankful. I’m optimistic that this case won’t prosper in court. But it’s not the word that counts but the evidence behind the case,” he said.

Early yesterday, Senior Supt. Joel Doria, CCPO director, relieved a police officer assigned at the stockade for allowing private individuals to guard the facility, and for letting Lim’s relatives visit the accused in the wee hours of the morning.

But then at noon, Lim’s sister was at the CCPO stockade and prevented reporters from coming near the facility.

While processing the bail bond in court, Lim discreetly talked to CDN’s photographer and expressed dismay over his photos used in CDN and the Philippine Daily Inquirer which he said were quite big and intrusive. He was referring to the photo which showed him squatting near the toilet bowl with his back facing the camera.

His sister also expressed her dismay by telling the photographer, “Bati kaayo mo og picture. Sunod, apilon gani ko nimo, sultihi ko daan aron maka-make up ko (Your photos are not nice. Next time, if you include me in your photos, let me know ahead so I could put on make up),” she said.

Nuñal’s family, through their lawyer, has coursed their request for police protection through Cebu City Mayor Tomas Osmeña who wanted SPO1 Adonis Dumpit to take the role.

However, Senior Supt. Doria said Dumpit, the sharpshooting policeman, has another assignment. Instead, two other policemen were designated to secure the victim who is currently recuperating at the hospital.