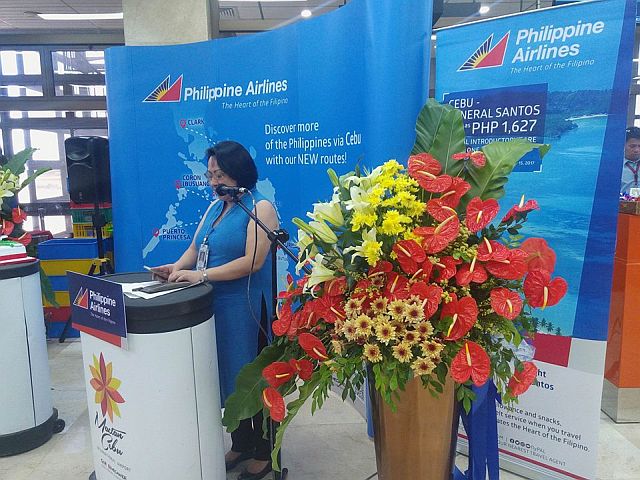 “The expansion links different islands of the Philippines, bringing people together through seamless connections between Luzon, Visayas, and Mindanao,” Reyani Romano, PAL Visayas area head for sales, said during the send-off ceremony for the CEB-GES and CEB-SUG flights close to noontime.

PAL also held a send-off ceremony for the CEB-PPS and CEB-USU flights earlier in the morning.

In January this year, PAL also launched a direct flight from Cebu to Clark and vice versa, more conveniently linking Central Visayas to the rest of Luzon.

“Those from General Santos can now go to Clark through Cebu. They no longer have to go to Manila,” Romano said.

Salvador “Bud” Britanico Jr., PAL vice president for in-flight services, said they hope to open more routes as they acquire new aircraft this year and the next.

Last March 15, during PAL’s 76th anniversary, the airline ordered two Boeing 777s, which are expected to be delivered in December 2017 and January 2018.

In July this year, PAL is also expected to get the first out of five new generation turbo props.

“This expansion will help decongest the airport in Manila, providing passengers convenience and ease of travel,” said Britanico.

Ravi Shankar Saravo, chief commercial adviser of GMR Megawide Cebu Airpory Corp. (GMCAC), the private operator of MCIA, said the growth of flights from Cebu to other provinces is an indication of Cebu’s arrival as an important secondary hub.

“This is an indication that Cebu is emerging as an alternative hub. While more domestic routes are opened here, it will help Manila focus on more strategic routes,” said Saravo.