Palma calls on faithful to offer life for the Lord 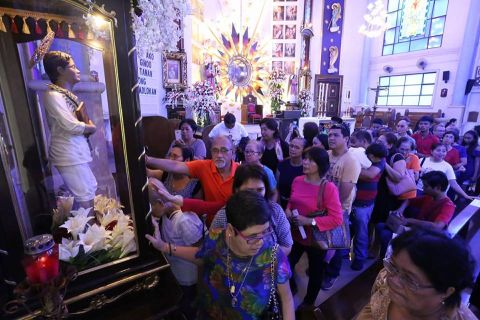 Devotees venerate the image of San Pedro Calungsod inside a shrine built for the Visayan saint in 2002. Calungsod is the second Filipino saint after San Lorenzo Ruiz de Manila. (CDN PHOTO/JUNJIE MENDOZA)

“Bear witness to the faith by the way you live.”

This was the challenge posed by Cebu Archbishop Jose Palma as Catholics marked the feast of the first Visayan martyr canonized by the Catholic Church yesterday.

Palma presided over the 9:30 a.m. Mass at the Cebu Archdiocesan Shrine of San Pedro Calungsod along D. Jakosalem Street in Cebu City.

This year’s feast was the fifth since Calungsod was canonized and invoked as a saint.

The young missionary was killed in Guam, along with Jesuit priest Fr. Diego de San Vitores on April 2, 1672 for catechizing and baptizing the natives.

Palma encouraged the faithful, particularly young people, to emulate Calungsod who offered his whole life and ministry for the Lord.

“The blood of martyrs is the seed of Christianity. It’s inspiring how martyrs offered their lives for God,” the 67-year-old prelate said in his homily. 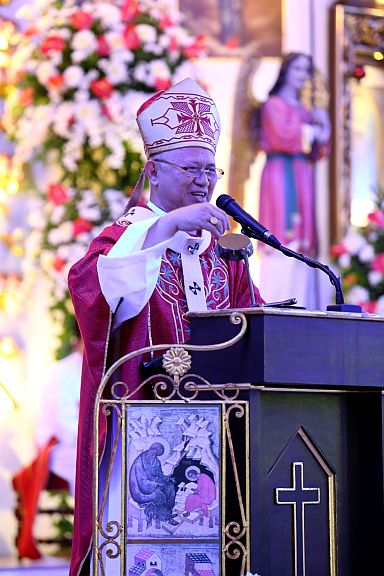 “Not many of us though can be martyrs like San Pedro Calungsod. But all of us are called to live the faith, to bear witness to the faith through various ways,” he added.

Palma said he was happy to read stories of graduates who finished their studies amid adversities.

“Anything good reminds us that we can still do something beautiful and positive things amid various problems. We are reminded that God is with us and all good works is witnessing to the Lord,” he said.

Retired Bishop Christian Noel and at least 20 priests from the Archdiocese of Cebu concelebrated the Mass as hundreds trooped to the Calungsod Shrine which was built in 2002 in honor of the Visayan martyr.

To accommodate the number of people who visit the shrine, Palma bared plans to construct a Pilgrim Center outside the present structure.

“We want to have a similar structure to that of the Basilica del Sto. Niño where a large number of people can gather. Hopefully, we can do it next year,” he said.

Palma also announced that every Thursday is San Pedro Calungsod Devotion Day in the archdiocese. The perpetual devotion prayer to the Visayan martyr, he said, shall be recited before each Mass every Thursday.

Calungsod’s liturgical feast day is originally celebrated on April 2, the day of his death.

This year, however, the Archdiocese of Cebu moved the feast a day earlier since April 2 falls on a Sunday which cannot be disrupted by any other celebrations.

Calungsod was beatified by St. John Paul II on March 5, 2000. Out of the 44 persons who were beatified that day, only Calungsod advanced to be declared a saint on Oct. 21, 2012.

And of the seven saints who were canonized by Pope Benedict XVI on Oct. 21, 2012, only Calungsod has an image, in the form of a mosaic, inside St. Peter’s Basilica in Rome.

Calungsod is the second Filipino saint after Lorenzo Ruiz de Manila who was canonized in 1987.

Read Next
The stories worth sharing