The stories worth sharing 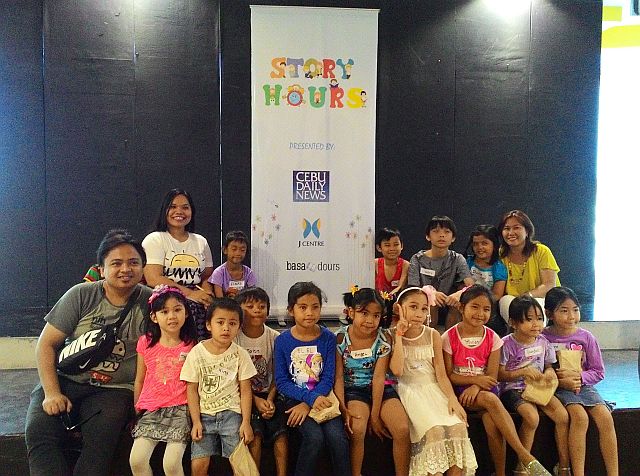 Edna Cabillan was 44 years old when an angel came to her life.

For more than a decade, she prayed for a child, but it seemed that her prayers had fallen on deaf ears.

Just when she was convinced that she and partner Neiry Sadili would grow old without one, Edna learned that she was pregnant.

When their daughter was born on February 2009, they named her Angel Grace to remind them constantly that she was a blessing from heaven.

“She is interested in books, and she’s active in school activities. She is a blessing to me. How a woman of my age was given the opportunity to be her mother is a miracle,” said Edna, now 51 years old.

“It is a responsibility that I take with a grateful heart,” she added.

And so, along with her mother, Angel Grace and four of her peers attended the March 25 edition of Story Hours, a literacy development initiative of Cebu Daily News (CDN), J Centre Mall and Basadours, a group of volunteer ambassadors for reading and storytelling.

Steven and Megan Sy were also with their mother, Kristine, when they checked out the session at the second floor of J Centre Mall as they were going around the mall that Saturday. 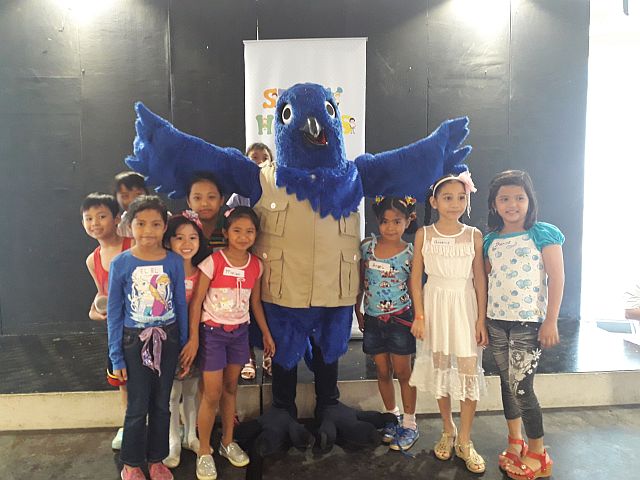 One more picture with Siloy before he flies back home. (CONTRIBUTED PHOTO/VIANCA ABELLANA)

The children were treated to a dance number by CDN’s mascot Siloy, which represents the Cebu Black Shama — an endemic bird that can only be found in Cebu.

For the storytelling session, “Gaya’s Gift,” the story of a carabao who tried to find her talent by imitating the skills of different animals, was read to the children.

In the story, written by Jenny Evans and illustrated by Junn Esteban, Gaya — the carabao — discovered that she can help others by just being herself because there is a difference that only she can make.

After the storytelling, the children broke up into small groups where they got to share their “super talents” with other kids.

They then wrote their own stories facilitated by members of Basadours.

“I love the part where we get to write our own stories and that we can put anything we want in the story,” said six-year-old Steven who goes to the Philippine Christian Gospel School.

Like Steven and Megan, Kathleen Alfaro’s four kids: Kaye (14), Clarence (12), Karen (8) and Kandace (5) also walked into Story Hours at the mall after Kathleen saw a poster of the storytelling session.

Kathleen homeschools her four children, believing that as a parent, she needed to play a more important role in their lives.

“Cultivating the habit of reading is very important. I’ve been telling my children to spend 15 to 20 minutes a day reading something. I’ve even included reading in their chore card,” said Kathleen.

A love of reading and a parent’s love for her children — two loves intertwined in four-hour reading sessions which started only last September. 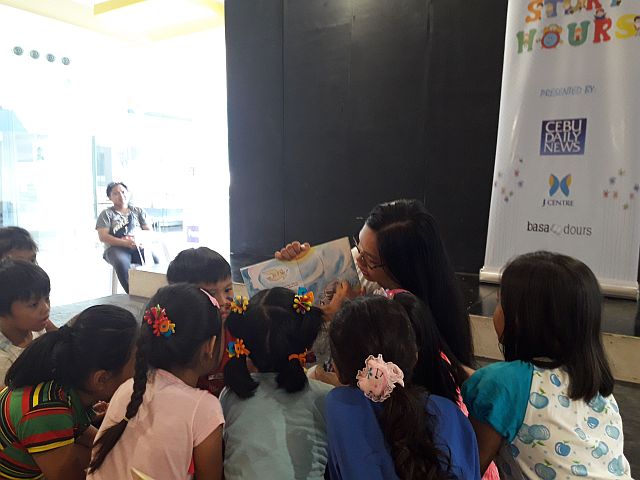 Children listen intently to the story “Gaya’s Gift,” a carabao who wanted to learn the skills of other animals. The story was written by Jenny Evans and illustrated by Junn Esteban. (CONTRIBUTED PHOTO/VIANCA ABELLANA)

Originally, Story Hours organizers invited public and private schoolchildren to attend the sessions at the mall.

However, a fatal bus accident involving college students on a field trip in Tanay, Rizal, led to a shift in the approach after the Department of Education (DepEd) issued a moratorium on field trips and other similar activities last March 9.

The DepEd moratorium has made it difficult to invite children, through their schools, to attend the storytelling sessions as the moratorium covered all public elementary and secondary schools. Private schools were also encouraged to abide by the rule.

Not one to easily give up on a challenge, organizers of Story Hours shifted from inviting participants through their schools to sending out invitations in the barangays instead.

For the March session, they headed to Barangays Lahug and Banilad to invite children with their parents.

Story Hours also opened its doors to walk-in participants, who just happened to be at the mall while the program was ongoing.

The regular arrangement of inviting private and public schoolchildren is expected to resume in June or as soon as DepEd lifts its moratorium on field trips and issues a decision based on a review of its policies.

Meanwhile, Story Hours will continue to entertain walk-in participants till May with enchanting stories worth telling.