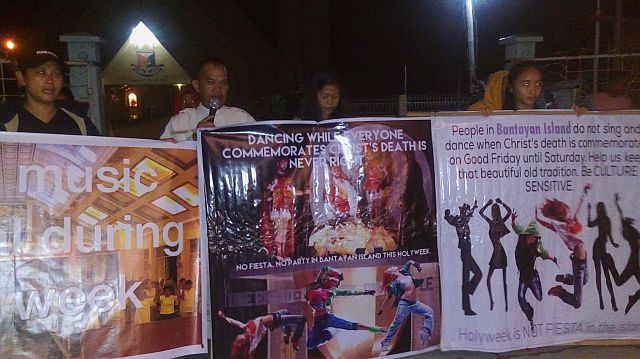 The disagreement between local officials and the community-backed priest on the amount of revelry to be allowed in Sta. Fe town on Bantayan Island during the Holy Week has taken a new level.

Mayor of Sta. Fe town Jose Esgana wants the town’s parish priest, Fr. Roy Bucag, to be held accountable for not securing a permit to rally from his office for the prayer rally he led at dawn on Saturday to oppose the holding of the Isla Music Festival, a Holy Week event sponsored by the local government unit (LGU).

Esgana said the playing of the drum and bugle that he heard yesterday dawn during the anti-festival procession was “a noise and a public disturbance.”

“Wa gani mo suwat nako nga naay buhaton ana. Mao na nay buhaton sa usa ka leader (There was not even a letter sent to me that there will be an activity like that. Is that the right thing to do as a leader)?” the mayor added.

Esgana further said that the priest should also be made to answer for “child abuse” since there were children “used” to hold the anti-festival tarpaulins during the dawn procession.

The mayor took this action after more than 200 parishioners of Sto. Niño Church in the town of Sta. Fe, led by Bucag, staged a dawn prayer-rally on Saturday to oppose the holding of the Isla Music Festival during the Holy Week.

Some elderly parishioners held on to the images of Mother Mary while young parishioners were holding torches.

A tarpaulin was held by youth members during the procession, which read, “Dancing while everyone commemorates Christ’s death is never right. No fiesta, no party in Bantayan Island this Holy Week.” Music from a drum and bugle group was also heard during the procession that ended at around 4:20 a.m and was followed by a Holy Mass at the parish church officiated by Bucag.

In his homily, Bucag stressed that he was not opposing the holding of the Isla Music Festival in Sta. Fe, but it should not be on April 12 to 15, or from Holy Wednesday to Black Saturday.

“Ngano? Ngano sa Semana Santa (Why? Why does it have to be done during the Holy Week)?” he asked during the homily.
The parish priest said the music festival could instead be done on Easter Sunday, just in time when the faithful celebrates the resurrection of Christ.

‘It will never change’

In the middle of the Mass, Bucag was not able to hold back his tears and sobbed.

In an interview with Cebu media, he explained that he is always touched every time he celebrates Mass, especially now that he is battling the local officialdom bent on holding the music festival during the Holy Week.

To the priest, however, “the spirit of the Holy Week celebration of Catholic Church never changes. It will never change.”

He said the Holy Week should not be used to create livelihood, culture and community development activities, more so to engage in festive eating, drinking and dancing. 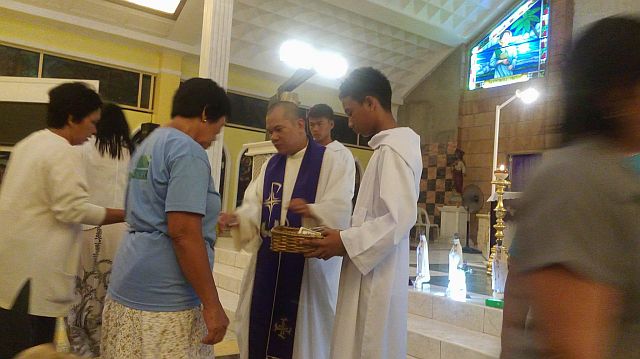 “There is an appropriate time for all of that. We are now facing the realities of our present time where cultures and traditions that have been rich in values are being compromised because people’s priorities, perspective and values in life have changed,” he said.

He added, “Jesus Christ was one with us who suffered and died, who gave us back the lost identity and we received the new life and believed in him.

Our faith is the only precious gift that we give time to celebrate.”

Bucag has written to Gov. Hilario Davide III last week, seeking his help to convince Esgana to reschedule the festival.

Bucag claimed that he instead received a text message from Davide suggesting a change of venue, which is 500 meters from the church.

But the priest said it was not a matter of venue change. He noted that when the festival was held during the Holy Week last year, young people were seen drinking and dancing, oblivious to the solemnity of commemorating the passion and death of Christ.

Gerald Sevilla, the former president of Parish Youth Coordinating Council (PYCC) of the Sto. Niño Parish, said they have lined up activities for this Holy Week, including the staging of “sugat” (meeting) on Easter Sunday.

Sugat is the reenactment of the meeting of the risen Christ and the Virgin Mary on Easter Sunday morning.

“We oppose this Isla Music Festival. The Holy Week is not a celebration nga mag happy happy lang ta (that we should only think of the fun things to do),” Sevilla said.

Parishioners like John Alolor, a lay minister, told CDN he found it insensitive on the part of the local government to stage a fun-filled event while the world is commemorating the death of Christ.

“Dili man na maayo ilang gibuhat. Og naa diay mamatay mag hudyaka diay ka (What they are doing is not good. If someone died, are we supposed to celebrate)?” he said.

Despite the controversy, the Isla Music Festival 2017 will carry on this Holy Week.

Farrel Sanchez, the marketing representative for the festival, said the main event will proceed as scheduled in the evening of Black Saturday.

“There is no bikini open to happen,” Sanchez, speaking to the media yesterday, however, assured.

Based on the schedule released by Sanchez, they will consider April 12, Holy Wednesday, as set-up day and to conduct sound check. On April 13, Maundy Thursday, activities will be around the scheduled beach volleyball events. On April 14, Good Friday, there will be a film showing on “The Passion of the Christ.” 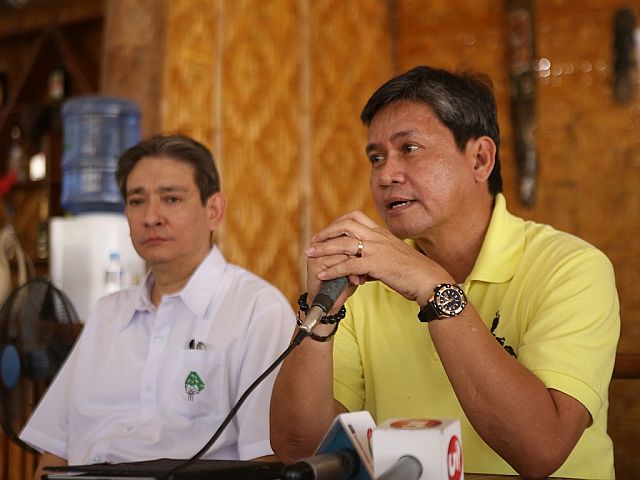 “I graduated from a Catholic school. I respect the church so much. We don’t want to disrupt any (activity of the) church,” Sanchez added.

On Black Saturday, only acoustic music is allowed to be played in post event, or from 11 p.m. to 2 a.m.

If the event will still continue beyond 2 a.m., the local government has the authority to stop it, she said.

Sanchez said they also removed the fashion show portion of the festival.

Supposedly, they will feature the “hablon” creations of Cebuano designer Dexter Alazas.

But the food events for the duration of the festival will proceed since they have made the needed arrangement with 30 concessionaires, most of whom are local restaurants, she added.

Sanchez said this will be the third year that they will be holding the Isla Music Festival and admitted they sold less tickets for its events due to the controversy.

Niño Mike Torevillas, the paralegal officer of Sta. Fe, also assured they will monitor the event.

Esgana said he respects the church “100 percent,” which is the reason why he decreed that “no noises are allowed during Holy Week” that can disrupt the church’s activities.

He, however, noted that the organizers even made sure to stay away from areas close to the parish church and opted to hold the festival in a secluded area in Barangay Poblacion, Sta. Fe.

For him, there should be a balance between religion and the economic gain the municipal government wants from the influx of local and foreign visitors during the Holy Week.

He said tourism is now the town’s top source of income, followed by fishing and organic farming.

In 2016, the LGU collected P205,000 from environmental fees paid by the some 30,000 local and foreign tourists who visited the town in last year’s Holy Week.

Esgana also said that the governor did not stop him from allowing such events in his town provided that it won’t distract church activities.

The mayor stressed he will make sure the events will be provided with security starting from the Barangay Intelligence Network to the municipal police, and even receive an augmentation force from Police Regional Office in Central Visayas (PRO-7).

Insp. Mikhail Mangawang, Sta. Fe police chief, said they are prepared to provide security to the tourists and maintain peace and order especially during the Holy Week events.