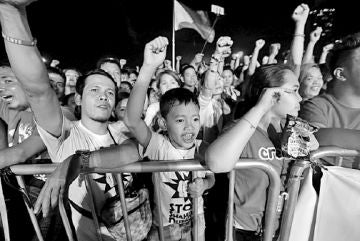 Manila — Supporters of President Duterte flocked to the Rizal Park in Manila, on Sunday, to denounce Vice President Leni Robredo for her allegedly inaccurate remarks, “wild accusations,” and “unfounded claims” against the Duterte administration’s war on drugs before a United Nations body.

Rally participants displayed banners and placards depicting Robredo with horns or as the mythological Medusa, and branding her as a traitor.

The rally, with the themes “Palit Bise” (Change the Vice President) and “Stop Shaming Duterte,” was peppered by anti-Robredo speeches and musical numbers by rappers and theatrical artists, which attracted Sunday park-goers.

Lopez said the Vice President “grossly misrepresented” the situation in the country in her video message before the UN Office on Drugs and Crime.

Lopez said Robredo’s remarks were politically motivated and orchestrated by her party, the Liberal Party, which he described as “treacherous and venomous,” and constantly plotting to overthrow Duterte.

Highlighting the role of the social media, the organizers and guests also posed for a “groupie” as they chanted “Stop shaming the Philippines.” Co-hosts Jimmy Bondoc even joked about the group being on stage just in case a bomb threat, made on Facebook by a Duterte critic, materialized.

One rapper, Arcadio Saavedra, sang about his challenge to one of Duterte’s critics, Sen. Antonio Trillanes IV, to a fistfight./INQUIRER.NET