Hazards of the job 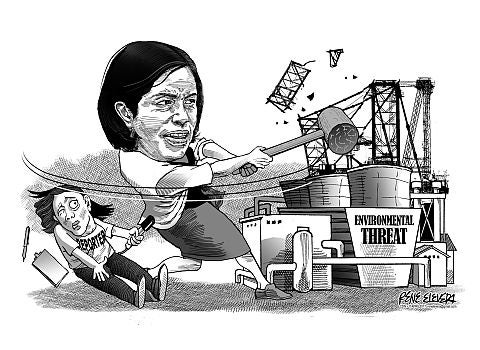 She hasn’t been confirmed yet, but nearly one year into her tenure, Environment Secretary Gina Lopez has been butting heads with government officials and officials of mining firms, most of which she suspended in her belief that their continued operations have been harming the environment.

While a lot of people have shown admiration for her seemingly uncompromising stance on the environment, Lopez made a small but significant misstep when she was overheard insulting a female reporter whom she accused of “being bought” and “not having a heart for the poor.”

The environment secretary was reportedly reacting to a story written by reporter Janina Lim in which the Department of Environment and Natural Resources (DENR) admitted that there were no scientific tests done during the audit of mining firms that were ordered suspended by Lopez.

The story was supposedly used by those opposing Lopez’s appointment at the Commission on Appointments in Congress. When Lim asked Lopez about her new order requiring suspended mining firms to put up a P2-million trust fund for the lands that were damaged by their operations and the affected families, that’s when the DENR chief blew her top and insulted the reporter.

Even when she explained later that she was ticked by Lim’s question during an ambush interview and that she was in a hurry to meet an appointment, Lopez drew outrage from the National Union of Journalists in the Philippines (NUJP) who demanded that she apologize to Lim for insulting her.

With or without the apology, we’re sure Lim would recover from her unpleasant encounter with Lopez, who, like her boss, is known for being passionate about the causes they believe in.

Problem is, like her boss, Lopez gets carried away with her environmental stance, and if left unchecked, it could cost her some favorable public support that had been sufficient to sustain her along with the President’s vocal support in her fight to remain in the Cabinet.

Lopez insisted that the conversation was supposed to be private and lashed out at BusinessWorld, the publication Lim works in, for supposedly being “tabloidish” in publishing that conversation that Lim managed to record.

Regardless of whether businessman Manny Pangilinan, with whom Lopez had crossed swords on the mining issue, owned a majority stake in the publication, that still didn’t justify Lopez’s behavior towards Lim.

Public officials always have an adversarial relationship with the media who, like the public officials they cover in their beats, may at times appear overzealous and downright predatory especially to those unused to the spotlight.

That Lopez managed to explain her side about the issue shows that she is still accessible, but we hope she wouldn’t adopt her boss’ tendency to erupt and hurl expletives especially when it’s not warranted.