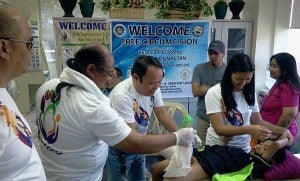 Bureau of Customs Sub-Port of Mactan collector Gerry Campo (middle) and colleagues assist in circumcising one of almost 200 beneficiaries from three barangays in Lapu-Lapu City.

NEARLY 200 young boys benefited from the free circumcision initiated by the Bureau of Customs Sub-Port of Mactan at their office compound last Saturday.

The beneficiaries were also given free medicines and ice cream after the circumcision.

Campo said this is the first time that they conducted a community project since he assumed as collector in 2013.

“We have always been doing a summer outing the past several years but this time we thought of reaching out to the community,” said Campo.

Campo organized the activity and tapped the services of doctors and nurses from the Philippine Air Force, Cebu Institute of Medicine, Gullas Medical College and Mactan-Cebu International Airport.

Merlyn Ngujo, who accompanied her six-year-old son, was thankful for the opportunity since she no longer has to pay for her son’s circumcision.

Campo thanked the almost 20 doctors and nurses, as well as the staff of Bureau of Customs Sub-Port of Mactan who volunteered their time and efforts for the event.