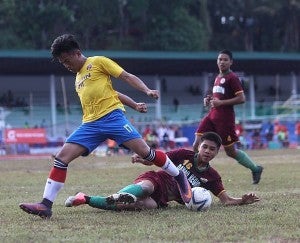 Central Visayas (yellow shirt) and Davao play their elimination round football match in the ongoing Palarong Pambansa in Antique. Cviraa won the match to inch closer to the gold medal round.
(CDN PHOTO/TONEE DESPOJO)

Cviraa drops to 5th after another gold shutout

San Jose, Antique — At the rate things are going, it will take a strong finishing kick if the Central Visayas Regional Athletic Association (Cviraa) is to achieve its lofty goal in the 60th Palarong Pambansa here.

For the second straight day, Cviraa failed to win a gold medal and could only muster two silvers and three bronzes.

With the meager harvest, Cviraa dropped from third spot to fifth with three golds, four silvers and seven bronzes.

The National Capitol Region (NCR), the meet’s prennial champion, has started peeling away with 41 golds, 22 silvers and 11 bronzes.

Occupying the place that Cviraa is targeting this year is Region 6, which trails NCR with eight golds, five silvers and five bronzes. The Negros Island is at third with a 5-6-4 (g-s-b) tally followed by Region 4-A, which has 4 golds, 10 silvers and 11 bronzes.

Cviraa’s top jumper John Marvin Rafols had a chance of ending the Bisdaks’ drought but what should have been a gold medal jump ended in disappointment.

Hobbled by a left hamstring injury, Rafols decided to pull out from the secondary high jump — an event he ruled last year in Legazpi City, Albay.

“I tried but I felt some pain in my hamstring so I decided not to continue with my attempt anymore,” said the 18-year-old student of the University of Cebu (UC).

Rafols was confident of defending his title as he was up against the same opponents he beat last year when he cleared 6.91 meters. Going into yesterday’s final, the best jump in the preliminaries stood at 6.81, he said.

Rafols will try to finally give a gold medal to Cviraa when he defends triple event title today.

Aside from Rafols, Mary Joy Loberanis and Samantha Gem Lemos will also try to end Cviraa’s struggle at the tracks.

Lemos will defend her 100-meter dash title today, while Loberanis advanced to the finals of the 800m and 1,500 runs, which will be played on Thursday and Friday, respectively.

Aside from winning silver in the elementary girls’ floor exercise, Eunie also bagged a bronze in the vault event. Euricka got her silver from the beam event.

Archer Lloyd Apawan contributed a bronze in the boys’ 50-meter competition, while the tennis secondary girls team also came up with a bronze finish.

Though Cviraa is in what looked like a precarious situation, Zenaida Gocotano of the Department of Education (DepEd) in Central Visayas remains optimistic that the region could meet its target of finishing second overall.

“There are still more games to be played. We are doing well in the ball games and we still have finalists in athletics,” Gocotano said.

The secondary football team also stayed unbeaten in three games after its 3-0 win over Region 11 with Leo Maquiling, Clyde Vitualla and Pietre Dakay delivering the goods.

The Cviraa billiard team faltered in the quarterfinal round of the 8-ball competition but is expected to do better in the 9-ball event.

Read Next
Police pick up adorable intruders: A pair of pygmy goats