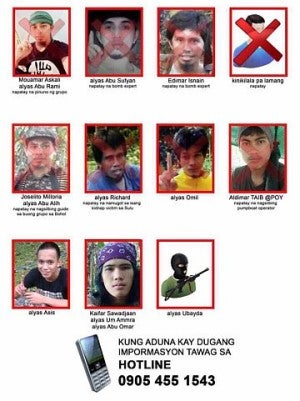 A poster released by the Armed Forces of the Philippines marks with a letter X the photos of 8 Abu Sayyaf members who have been killed and of 3 still being hunted.

The number of Abu Sayyaf Group (ASG) members still being hunted in Bohol may just be down to two, fighting for their survival and no longer posing any threat, the Armed Forces of the Philippines (AFP) said Tuesday.

“We know where they are, generally in what area, and effort is still being done to pursue them. But as I mentioned a while ago, the assessment of the Central Command, particularly the one given to me by General Oscar Lactao, is that these two are fighting for their survival. So they don’t pose any serious threat anymore,” Padilla said in a Palace briefing.

“The two or three remaining individuals — one of whom we believe to have expired because of exposure to the elements and of hunger — are now down to two who are fighting for their survival,” he said.

However, Mayor Rey Piezas of Clarin town, the scene of last Saturday’s clashes where four ASG members were killed, denied reports that one of three remaining ASG members had died because of hunger.

In a text message to Cebu Daily News, Piezas said the report was “negative.”

The mayor said the troops were still conducting manhunt operations against the three remaining ASG members who are believed to be still hiding in Clarin and the adjoining Inabanga, the place where the first fierce clash happened on April 11, which left four ASG members dead, including their leader Muammar Askali alias Abu Rami. Also killed in the same clash were two local residents and four government troops – three Army soldiers and a Special Weapons and Tactics (SWAT)-Bohol policeman.

Both the Army’s 302nd Brigade and the Police Regional Office in Central Visayas (PRO-7) also told CDN they could not confirm the report.

Capt. Jojo Mascariñas, spokesperson of the 302nd brigade, told CDN that they are focusing on the evacuees in affected barangays in Clarin and Inabanga

Chief Supt. Noli Taliño, PRO-7 director, said in a text message that he has not received any information on the matter.

Padilla said security concerns in Visayas have been addressed as security became the concern of tourists in the region.

“The Armed Forces is and the Philippine National Police is happy to inform you that the threats we faced in the island of Bohol and the other areas confirmed reports that have been coming our way as well as to the public regarding dangers posed by terrorists in our tourist areas is already addressed,” he said.

Earlier yesterday, the AFP released an updated list of ASG members who entered Bohol and identified eight who have been killed in the separate clashes in Inabanga and Clarin.

They were Mouamar Askali, the leader of the group; bomb experts Abu Sufyan and Edimar Isnain; Joselito Melloria, a Boholano ASG member who guided the bandit group into Inabanga, Bohol; pumpboat operator Aldimar Taib; two men who carried the aliases Richard and Omil; and an unidentified man.

Three others who remain at large are a Kaifar Sawadjaan also known as Um Ammra, a man with “Asis” as alias, and an “Ubayda.”

The AFP said that anyone who knew the whereabouts of the three remaining ASG members are encouraged to call the 302nd Brigade of the AFP, at telephone number 09054551543.

Read Next
No fiesta celebration for Bacani in Clarin this May