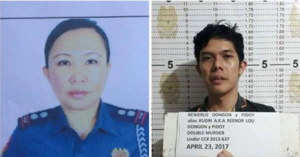 They are married after they tied the knot under the Muslim rites several years ago, said Chief Supt. Noli Taliño, director of the Police Regional Office in Central Visayas (PRO-7).

“Dongon himself admitted that they are married. Superintendent Nobleza converted to Islam so they could tie the knot,” he said on Wednesday.

Nobleza was originally married to Supt. Allan Nobleza, a police attache to Pakistan. In 2010, upon their request, the court annulled their marriage.

Nobleza, an elderly woman named Judith and a 13-year-old boy were on board a black Nissan Navara pickup driven by Dongon when they were taken into police custody for refusing to stop at a checkpoint in Clarin town in Bohol on Saturday evening at that time when government troops were pursuing the remaining Abu Sayyaf members in the area.

Taliño said Nobleza, who is deputy chief of the PNP Crime Laboratory in Davao City, admitted that they intended to deliver medicines to the remaining Abu Sayyaf members who were trapped in Clarin, Bohol. But the policewoman denied insinuations that they were trying to rescue the bandits.

“Accordingly, their plan was allegedly just to throw the medicines,” Taliño said.

On the orders of Philippine National Police (PNP) director Ronald “Bato” dela Rosa, Nobleza and Dongon are detained in Camp Crame while the charges against them are resolved by the prosecutor.

The elderly woman remains at the custody of the Bohol Provincial Police Office while the minor was turned over to the Department of Social Welfare and Development.

In a 2013 news report, Brig. Gen. Ricardo Visaya, then commander of the Army’s 4th Infantry Division, said Dongon reportedly served as leader of Khilafah Islamiya who was arrested along with an associate by police intelligence operatives in Marawi City on May 11, 2013.

The operation led to the seizure of 29 pieces of blasting caps and other materials in manufacturing bombs.

Dongon, however, was subsequently released because the name on the search warrant was that of his younger brother.

Dongon was also allegedly responsible for the bombing of Maxandrea Hotel in Cagayan de Oro City in 2012 that resulted in the death of two individuals.

The case against Dongon was dismissed by the prosecutor due to a technicality.

Taliño said they would additional charges against NObleza and Dongon for possession of explosives, a non-bailable offense.

On Monday evening, the police recovered components for an improvised explosive device from the luggage of the couple that were left in the apartment they rented  in Barangay Looc on Panglao Island, Bohol. Among those recovered by the police were a C-4 plastic explosive, a detonating cord, a blasting cap, and a blasting cap kit.