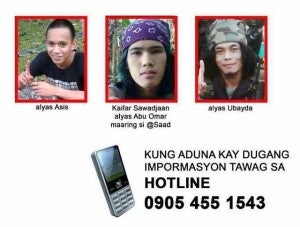 AFP and PNP in Bohol release a poster with the photos of the three remaining members of Abu Sayyaf who are still at large. They are urging the public to report any presence of suspicious-looking persons in their area. (Source:AFP ug PNP)

One of the three remaining members of the Abu Sayyaf in Bohol was reportedly spotted in a village in Tubigon town which is adjacent to Clarin where the April 22 gunfight between government troops and the bandits ensued.

A farmer, in a DYLA report, told the police that a suspicious-looking man requested for food and a pair of slippers from him, and asked how he can go to either Tagbilaran City or Cebu.

The man purportedly left the village and avoided the national highway.

But Captain Jojo Mascariñas, spokesperson of the 302nd Infantry Brigade of the Philippine Army in Bohol, brushed aside reports that one of the bandits has gone out of Bohol.

“Not one of them has escaped. They are all still hiding in the mountains, trying to evade our troops. It’s just a matter of time and we will get all three,” he told CDN.

Based on their monitoring, Mascariñas said the three bandits identified as Alyas Asis, Kaifar Sawadjaan also known as Um Ammra, and alyas Ubayda are still roaming around the mountains of Inabanga, Clarin, and Tubigon.

“They are not much of a threat now. Instead, we (soldiers and the police) are the threat to them,” he said.

Mascariñas appealed to the public to be alert because there’s a possibility that the three remaining Abu Sayyaf members will blend in among the people.

Mascariñas encouraged the people to immediately alert authorities whenever they notice suspicious-looking people.

One characteristic of Abu Sayyaf members that Boholanos should watch out for, he said, is their manner of speaking.

“They don’t speak Cebuano well. They can pretend to be deaf or mute so that people won’t be able to identify them through their language,” Mascariñas said.