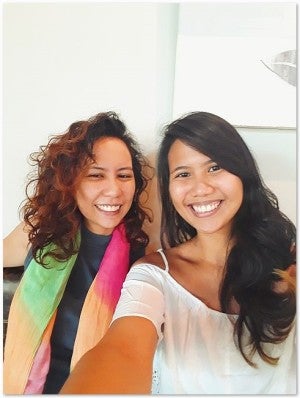 Two sisters from Cebu City are out to change the local dessert scene as they offer a sweet treat that tastes just as good as it looks.

Cammy and Mayan Benedicto, two of the three people working behind Cammy Confectionery, want to put a premium on the well-loved Filipino dessert — leche flan.

“One of the goals of the company is to add twists to classic desserts, which is why we have leche flan, at the same time, upholding local ingredients. We’re trying to go for a very simple line of desserts but of high quality,” Mayan, 26, told Cebu Daily News.

Mayan, who handles marketing for the brand, said the idea was mostly met with wide-eyed wonder since it was something new to Cebu.

The gold-lidded transparent jar provides a clear view of what customers are about to eat — yellow caramel custard with a rich golden brown syrup at the bottom.

“The goal is not just to look nice but also convenience. When you put it in a jar, you can carry it anywhere,” she added.

She noted that there are many cafés and restaurants offering “cute” food, something that social media-savvy people would gush over, but these do not really taste as good as they look.

Cammy, a 27-year-old home-based English as a Second Language (ESL) teacher, said they really wanted to sell leche flan as a brand.

“We didn’t want it to just be how others see the dessert. For some, it may just be a very simple dessert, but it can be so much more. It can be a premium dessert,” she said.

Cammy’s formula for Lucy’s delight was a recipe she “earned” only after five years. It was a secret recipe that belongs to the family of her partner and Lucy’s father, Miguel Fonacier, who hails from Cagayan de Oro City.

In the last five years, usually every Christmas season when they visit their relatives there, Cammy has tried to convince Miguel’s aunt, Mimi, to teach her the family recipe.

After half a decade of ceaseless pleading, it was around November in 2016 when Aunt Mimi finally agreed to prepare the dessert with Cammy.

It was Miguel’s suggestion for Cammy to try making leche flan in a jar after he found out that his partner had finally learned how to do it.

Miguel helps in branding and graphic design for Cammy Confectionery and acts as a “consultant” for the business.

The sisters had played with the idea of selling it and were convinced to go ahead with the plan after positive feedback from family and friends.

Cammy spent P2,000, a Christmas gift from Miguel, to buy the ingredients and jump-start her business.

In less than a month, the sisters were able to regain their initial investment and expand their business. At present, the dessert is also available at the Coffee and Comfort Café in Ramos as well as Isidira Comfort Cantina in uptown Cebu City.

Sold at P90 per jar, they only started with 15 jars every ten days with Casa Gorordo but now supply 10 jars per location every week.

The dessert producer can prepare up to 100 leche flan jars in a day if the demand calls for it.

Cammy Confectionery already displayed its products at the Pop District Bazaar earlier this year and is set to sell Lucy’s Delight at Sugbo Mercado this month.

Mayan said they aim to tap a total of 10 locations to display their products at within the year and eventually become a preferred gift idea.

“The goal is for the dessert to be a gift idea. It’s also something different. Let’s say you go to Manila from Cebu, it’s always lechon or dried mangoes,” she added.

Even at this point, the dessert has already reached places outside the Philippines because of friends from other countries who visit Cebu.

These places include Malaysia, Belarus, Japan, Hong Kong, and just recently, the United States. At room temperature, Lucy’s Delight can last for three days at room temperature to 12 days when chilled, even without the additives, which gives it even more of an edge since it only uses natural ingredients.

New treats in the work

Aside from the leche flan, Cammy Confectionery is also developing other sweet treats such as oatmeal cookies and calamansi cheesecake.

Cammy considers her dessert business as a stepping stone to her lifetime dream of putting up her own café, something best paired with Mayan’s dream of establishing her own bed and breakfast.

Setting up the business had been challenging for Cammy since she had taken a five-year leave from baking or cooking due to work.

She began cooking and baking in high school, making brownies, cookies and banana loaves for her mother and sister almost every week. Reaching her dream, she thought, would begin after college, where she finished with a degree in culinary and textile arts.

Fate had other plans for her when she got pregnant with Lucy, prompting her to look for another job, since working in a kitchen wasn’t considered safe for pregnant women.

Cammy thought of working in an ESL company for two years and then quit to pursue her dream, but she had been so caught up with climbing the corporate ladder that it took her five years to decide it was enough.

Going back to doing what she loves after such a long time, Cammy said she had to face negative criticism and this made her question her capability as a cook and baker.

“But I learned to overcome my fear. It is okay to receive negative feedback because you need that in life,” Cammy said.

Mayan, for her part, said that she was glad her older sister decided to pursue her dream.

She admitted that their relationship was strained due to the stress Cammy got from her previous job but have since rekindled their closeness because of their dessert business.

“We learned to communicate more openly. I think that’s a life lesson that would help not only us as sisters but is also good for the business,” Mayan added.

Mayan said most family-run businesses end up having problems due to differences in opinions among family members, but with open communication, she and Cammy are confident their new dessert venture is going to work out.