BARANGAY CAPTAINS WILL BE ARMED 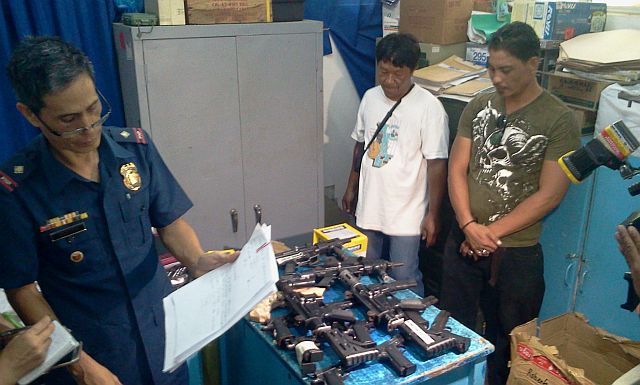 Insp. Mario Retuya, the supply officer of Mandaue City Police Office, shows the firearms with expired licenses that were turned over to them by Mandaue City. These are expected to be reissued by the city government once the Licenses to Own and Possess Firearms (LOTPF) are completed. (CDN PHOTO/NORMAN MENDOZA)

Barangay captains in Mandaue City will soon get back their city government-issued firearms.

But Mandaue City Mayor Luigi Quisumbing assured that “proper training and background screening” should be done before a barangay captain will be able to get back his or her firearms.

Right now, Quisumbing said the city is still in the process of renewing the Licenses to Own and Possess Firearm (LTOPF) with the Mandaue City Police Office (MCPO).

“As soon as all requirements are complied with and the PNP (Philippine National Police) gives the approval, we will be able to reissue the firearms right away,” Quisumbing told Cebu Daily News.

He said though that it will not be mandatory for all barangay captains to get their firearms from the city.

So far, the mayor said, around 85 percent of the village chiefs of the 27 barangays in the city have expressed their willingness to be armed in order to secure themselves especially during operations involving public order and safety.

If the plan pushes through, Chief Supt. Noli Taliño, director of the Police Regional Office in Central Visayas (PRO-7), said they are willing to facilitate the training to help barangay captains become responsible gun holders.

Taliño said he fully supports the arming of barangay captains, as it can help ensure their safety.

“Pwedeng-pwede yan para may proteksyon rin sila (There is no reason why it can’t done if only to protect themselves),” he said.

“I have not seen any legal impediment to let barangay captains carry firearms. Anybody can (own a firearm) as long as it is legal,” he added.

Concern over possible abuse was previously raised, with the barangay election only a few months away, should it pushes through in October this year.

But Taliño assured that no LTOPF shall be issued to barangay captains with derogatory records.

He said the Regional Intelligence Division can conduct an investigation against the village chiefs before firearms will be issued to them.

“And in the event that they already have their firearms and then they violate the law, we have to cancel their LTOPF,” Taliño said in an interview yesterday.

Cebu Gov. Hilario Davide III and Mandaue City Mayor Luigi Quisumbing both called to issue firearms to barangay captains in the wake of the killing of Barangay Captain Antonino Maquilan of Mantuyong in Mandaue City.

Maquilan, an amputee, was on board his wheelchair when an unknown assailant shot him near the Mantuyong barangay hall at 5:30 a.m. last May 3.

He was brought to the hospital where he expired.

Taliño said that while the government continues its war against illegal drugs, owning guns will help barangay captains in protecting themselves.

“We partner with the barangays in addressing all forms of crimes, especially illegal drugs,” he pointed out.

He recalled that barangay captains were first issued short arms like .45 caliber guns in 2014 during the time of former mayor and now sixth district Rep. Jonas Cortes.

But before the election in May last year, the firearms were recalled by the city government, which had to also work on its permits and licenses. 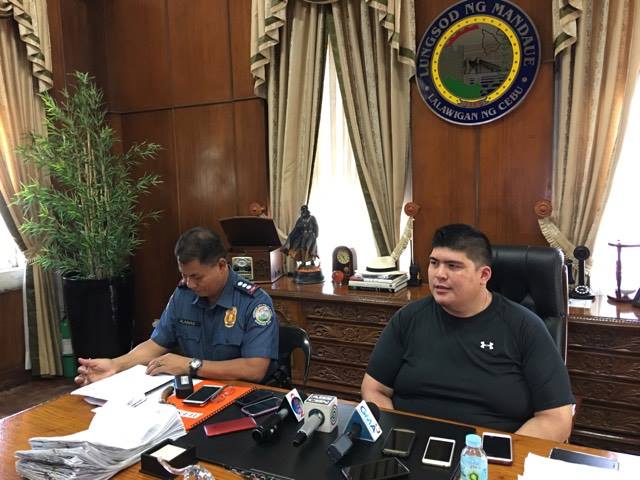 Mandaue City Mayor Luigi Quisumbing announced during a press conference on Wednesday morning that the city government will give P200,000 reward for any information that will lead to the arrest of the assailants who shot Mantuyong Barangay captain Antonio Maquilan. (CDN PHOTO/JOSE SANTINO S. BUNACHITA)

(The barangay captains have long been praying for the return of the firearms that were issued to them. They have been repeatedly making that request to the mayor through me.)

During Mandaue City’s fiesta celebration last Monday, Manatad said he was able to talk with Mayor Quisumbing who asked him if there are any guidelines or memorandum which prohibits the issuance of firearms to barangay captains.

Manatad said he told the mayor that there are none, which might have prompted the mayor to decide in favor of rearming the barangay captains.

With Department of Interior and Local Government in Central Visayas (DILG-7) director Rene Burdeos affirming there is no legal impediment to issuing firearms to village chiefs, Manatad said they are hopeful that the guns will be returned to them soon.

Burdeos said they see no problem with barangay captains being armed as long as they follow the needed licenses and permits.

“The issuance of firearms is only for protection purposes and it will not be used for whatever. That is part of the risks of being a barangay captain knowing that we are in the frontline service,” he said.

The move was also supported by the Commission on Elections (Comelec) Cebu Provincial Election Supervisor Lionel Marco Castillano who said that barangay captains are allowed under the Local Government Code to carry licensed firearms.

However, Castillano reminded that these barangay officials are not exempted from the gun ban during the election period if the barangay election pushes through this year.

He said though that they can still apply for an exemption from the ban through Comelec. 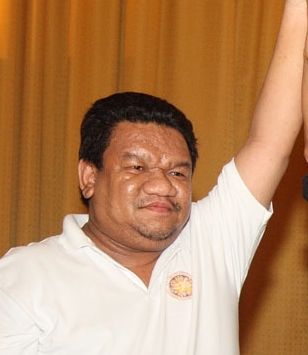 For his part, Manatad also assured that there should be no problems with barangay captains being armed.

Since 2014, Manatad said there have been no untoward incidents involving barangay captains with city-issued guns, except for one incident.

He was referring to Cubacub Barangay Captain Almario Bihag who was accused of pointing a gun at two women during a barangay assembly in November last year.

“For our part, we are also cautious in bringing firearms. We know that there are limitations,” Manatad said.

Sought for comment, Provincial Board Member Celestino “Tining” Martinez III said that while he supports the move of Mayor Quisumbing, it should not be something that is imposed all over the province.

Martinez, who is the president of the Association of Barangay Councils (ABC) in Cebu province, said that owning and carrying a gun is “preferential” on the part of a barangay captain.

“That will have to depend on the discretion of the local government unit. Because in all honesty, not all barangay captains really entertain the thought of carrying firearms,” he told CDN.

He said most female barangay captains or those that are already elderly will often prefer not to carry firearms.

Read Next
Farmer informant in Clarin gets entire P1.1M bounty