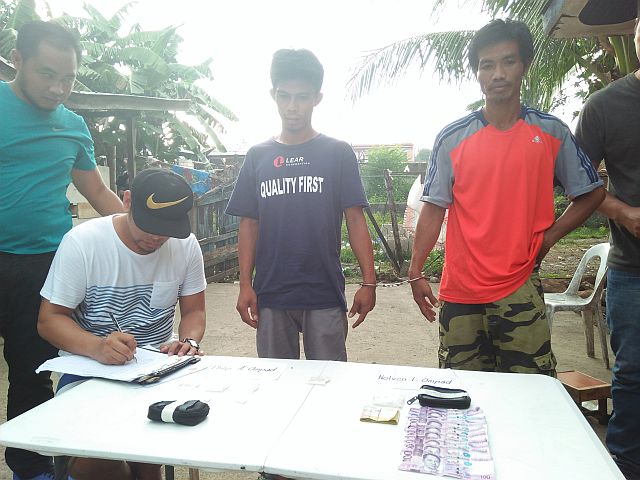 WHAT looked to be just another domestic dispute ended up as a drug bust, with police arresting a 52-year-old man with alleged ties to slain drug lord Jeffrey “Jaguar” Diaz.

Arnulfo Abellana was arrested in a buy-bust operation conducted by the Mambaling police in Barangay Duljo-Fatima, Cebu City at past 5 p.m. last Wednesday.

“We placed him under surveillance for two weeks before he was arrested,” said Senior Insp. Eduard Sanchez, chief of the Mambaling police.

Sanchez said an hour before his arrest, Abellana’s 55-year-old common-law partner went to their precinct to report that he beat her up.

“She sought help because she wanted to get her belongings. She then alerted us that Abellana was in their house repacking shabu,” Sanchez said.

Acting on the tip, Mambaling police hatched a plan to arrest Abellana.

Sanchez said they seized 40 grams of shabu worth P185,000 from Abellana. “We had a hard time monitoring him since he had been moving from one place to another. Luckily, her partner tipped us off of his whereabouts,” he said.

Sanchez said Abellana admitted he was engaged in the illegal drug trade but denied he had ties with Diaz, who died in an alleged shootout with police in Las Piñas City last year.

Abellana surrendered to the Mambaling police last year under the government’s Oplan Tokhang campaign. Sanchez said they kept Abellana in their watch list of drug suspects.

“We continued monitoring him after he surrendered. He lied low after Jaguar’s death but returned to his illegal drug activities,” Sanchez said.

Police said Abellana can sell 200 grams of shabu a week.

At 1 a.m., a massage therapist identified as Edward “Kitoy” Bustamante was caught with two small sachets of shabu at Sitio Beavers, Barangay Day-as.

The six were arrested while taking drugs inside the den.

In Lapu-Lapu City, two persons were arrested in a raid by police at a drug suspect’s home in Barangay Babag at past 6 p.m. yesterday.