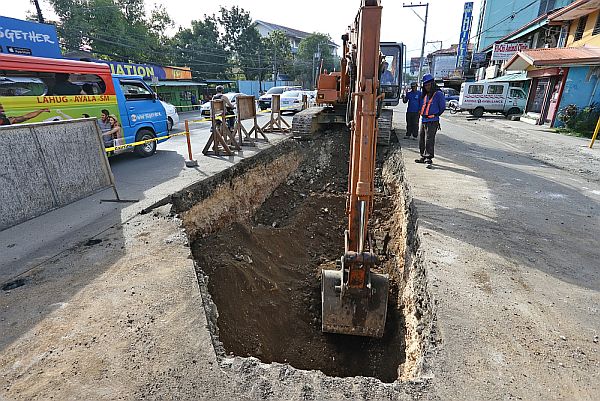 In this September 2016 file photo, crews start work on a drainage project along Pope John Paul II Avenue that remains unfinished after its April 2017 deadline.

The first is an ongoing flood-control project along Pope John Paul II Ave. which he said caused heavy traffic in both Barangays Mabolo and Kasambagan.

“A number of concerned citizens have approached my office and expressed their dismay on the seemingly snail-paced rehabilitation of the said avenue,” he said in a letter addressed to DPWH 7 director Ador Canlas.

Based on records from the Cebu City Transportation Office (CCTO), the project started in September last year and was supposed to end in seven months or April this year. But until now, the project is still ongoing.

The projects involves the digging of the outermost lane of the road, on the side going from SM City Cebu to IT Park.

Huge culverts are being placed on the road’s drainage line in order to mitigate flooding in the area during heavy rains.

Traffic has been rerouted in the area as a portion of the road has been closed to vehicular traffic.

Aside from the discomfort caused by the project on motorists and commuters, Labella said it has also affected businesses in the area.

“These concerned citizens have pointed out that the traffic congestion has resulted to serious economic losses especially to those who are working or conducting business along the said road,” Labella said in his letter.

The second project is the asphalting of Osmeña Boulevard including the road around Fuente Osmeña Circle.

The project involves scraping off the existing asphalt on the road to be replaced by a new layer. This has caused dust to be dispersed in the area.

Sought for comment about this, Engr. Roy dela Cruz of DPWH 7 said the project will soon be finished.

He said the project was a bit delayed since some of the materials from the contractor were delivered late.

Read Next
Elderly electrocuted in Toledo