LOST IN THE DEPTHS 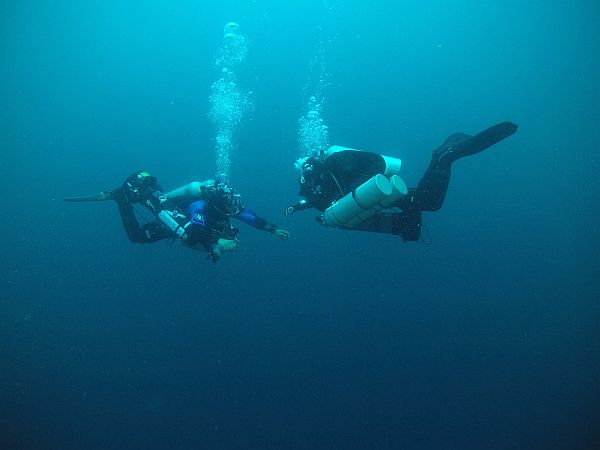 These Korean Tech Divers went down as deep as 200 feet in search of the body of Bien Unido Mayor Gisela Boniel off the waters in Caubian Island
(PHOTO BY CDN/FERDINAND R.EDRALIN)

The search for the body of Bien Unido Mayor Gisela Boniel in the waters off Mactan Island was halted yesterday amid foul weather.

But the wheels of justice to pin the culprits behind her disappearance and presumed death have started to move.

The first batch of criminal complaints against the mayor’s husband and suspected killer, Bohol Provincial Board (PB) Member Niño Rey Boniel, and four of his alleged cohorts was filed on Friday afternoon in relation to the alleged detention of three persons, including Mayor Boniel, who was also reportedly thrown into the sea after she was shot dead.

Gisela’s best friend Angela Gamalinda-Leyson and the latter’s 17-year-old son filed two counts of kidnapping, illegal detention and serious physical injuries at the Tagbilaran City Prosecutor’s Office against Niño, his cousin Riolito “Etad” Boniel, driver Randel Lupas and two other men whose identities are still being verified by the police.

Three other suspects who remain at large face the same charges.

Police were also preparing another case of parricide against the PB member over his wife’s death, while the other suspects will face a murder complaint next week at the Lapu-Lapu City Prosecutor’s Office, which has jurisdiction over the part of the sea where Gisela’s body was reportedly thrown.

Technical divers on Friday scoured the sea in between Bien Unido, Bohol, and Caubian Island off Lapu-Lapu City but have not recovered the mayor’s dead body.

Chief Supt. Noli Taliño, director of the Police Regional Office in Central Visayas (PRO-7), said finding Gisela’s body will help boost their case although they could still file criminal complaints against the suspects even if authorities could not recover Gisela’s body.

“Mas matibay ang kaso if mahanap natin ang katawan. Kaya tuloy-tuloy ang search operations natin. Hopefully, ma-recover yung body (We will have a more solid case if we will be able to find Mayor Gisela’s body. That is why the search operations have to continue. Hopefully, we can recover the body),” he said in an interview yesterday.

“Otherwise, our legal advisers gave us a go signal to still file the (parricide) case. We will do our task to make sure all the suspects will be convicted,” he added.

The search and retrieval operation for the body of Gisela was cut short at around 1 p.m. yesterday after divers experienced difficulty due to the strong current, zero visibility when they reached a depth of 30 meters and a very wide area subject to the search.

Renero Tatoy, a diving instructor hired by the police, said there was no specific area in the Olango Channel where the body of Mayor Boniel was dropped and they had to do a systematic search of about 30 square kilometers underwater.

(The problem is that the area was very deep and water current was strong. We went down around 30 meters, but visibility was zero. Thus, we need a zonar or a fish finder equipment to know the terrain underwater)

Senior Supt. Rommel Cabagnot, Lapu-Lapu City Police Office (LLCPO) director, said he would bring up the matter to Taliño so they could find the needed search equipment.

He also planned to ask help from the Philippine Navy, as they might have the equipment to read the underwater terrain or an equipment with a camera to find objects at deep sea.

He said they would resume the search this morning if the equipment are already available.

Aside from the eight suspects identified by the police, Taliño said investigators were also looking into the participation of other individuals.

“Apparently, the mayor was persuaded to go to Bien Unido (Double Barrier Reef Dive Camp). Based on our assessment, there really was a plan to kill Mayor Gisela. We will be inviting more persons to shed light on the matter,” said Taliño.

At past noon yesterday, PB Member Boniel and the two other suspects who were detained at the PRO-7 headquarters in Cebu City — his driver Randel Lupas (not Lokas as earlier reported), and cousin Riolito “Etad” Boniel — were escorted to the Tagbilaran City Prosecutor’s Office for the filing of the charges against them.

Two other suspects are detained at the Bohol Provincial Police Office. Their names are yet to be released by the police.

As this developed, Judge Marivic Trabajo-Daray of the Regional Trial Court Branch 52 in Bohol has granted the request of Niño and Lupas for the issuance of a writ of habeas corpus after they questioned the legality of their arrest.

“Under the rules on the issuance of the writ of habeas corpus, if it appears that the petition has prima facie merit, the judge could immediately grant it,” said the lady judge in an order dated June 8, 2017.

against the two suspects within 36 hours.

“The petitioners (Niño and Lupas) were arrested without a warrant last June 6, 2017 at 4 p.m. for the commission of a crime stated above and we only have 36 hours to bring the detained persons to Judicial Authority for proper disposition,” he said.

“We cannot bring the body of the petitioners on June 9, at 8:30 a.m. (as ordered by the court). Wherefore, respondent shall undertake to furnish copy to this honorable court the resolution from the Provincial Prosecutor’s Office either petitioners are indicted or not,” he added.

The petition filed by lawyer Handel Lagunay, the counsel of Niño and Lupas, claimed that Bohol policemen, acting on orders of Natividad, went to the residence of the PB member in Bien Unido at around 4 p.m. on Wednesday and requested the two to go with them at Camp Dagohoy in Tagbilaran City.

Lagunay claimed PB Member Boniel and Lupas, a government-paid driver, went with the police without any hesitation as they thought they would only discuss the peace and order situation in Bohol.

“However, to petitioners’ surprise, they were told that the police will be holding and detaining them under police custody on the pretext that they are under investigation,” Lagunay said.

The lawyer said no warrant of arrest was issued by any court against his clients nor any search warrant was served upon them. Hence, he said, they could not be detained.

Cabal, as head of RID-7 which took custody of the suspects, questioned the manner the writ of habeas corpus was issued.

He said they will ask the Supreme Court and the Department of Justice to review the order.

“Why was the order so sudden? We received reports that this judge is a relative of one of the suspects in this case,” Cabal told reporters.

The petition for the issuance of a writ of habeas corpus was filed at 1:21 p.m. on Thursday and the order granting the petition was released at 4:59 p.m., noted Cabal.

Cebu Daily News tried to contact Judge Daray but could not reach her. In her order, however, she stressed that any judge can immediately grant a petition for the issuance of a writ of habeas corpus if he or she finds it meritorious.

Cabal maintained that the arrest of the five suspects, including the board member, was within the bounds of law.

“It was a lawful arrest. We have reasonable grounds to believe that they should be charged. The judge was just so hasty in issuing the writ,” he said.

Gisela, who was celebrated as the first female pilot of AirAsia and a native of Iligan City, had been living separately from her husband in the last five months following a spat over certain issues, investigators learned. Gisela had reportedly wanted her marriage to Niño annulled.

The police were also looking into reports that Gisela had a relationship with a foreigner as claimed by Niño.

As narrated by Leyson, six to eight men entered the room where Gisela and Leyson were staying at Boniel’s resort in Bien Unido at around 2 a.m. on Wednesday.

Leyson, who said her mouth was covered by duct tape before she was tasered in the neck, claimed that before she lost consciousness, she saw Niño hit the mayor.

That was the last time Leyson saw Gisela.

Leyson said she and her son were later forced into a car driven by Lupas who drove them to Tubigon town, where they boarded a fast craft to Cebu where they reported the incident.

Cabal said they later found out that Niño also reported to the Bien Unido police at 3 p.m. on Wednesday that his wife was missing.

“He (Niño) asked the police to write on the blotter book that his wife was missing,” Cabal said.

An hour after, however, the Bohol police received directive from PRO-7 to arrest Niño.

“We have at least four witnesses — two of his (Niño) men as well as Angela and her son — to prove that he was responsible for his wife’s death,” Cabal said.

According to Taliño, Niño initially claimed that his wife slipped and had to be brought to Cebu City for medical treatment. However, minutes later, Taliño said Niño told him that the mayor was actually killed by his cousin Riolito.

But Riolito told the police that it was Niño who shot dead the mayor and even led the police to the area off Olango Island where the body was thrown.

He confessed that a rock, weighing about 30 kilos, was tied around Gisela’s body, which was wrapped in fish net, before they threw her into the sea to make sure it would sink.

Leyson said she had been trying to help Gisela and Niño resolve their differences and she still could not believe it would end with the death of her friend.

Leyson admitted that aside from financial matters, the couple had a spat over reports that Gisela was allegedly dating a foreigner, but it was not true.

“My God, that (Gisela having an illicit relationship with a foreigner) is not true. That is really untrue,” she said. “Yes, there is (a third party) they quarreled about. But that is not a valid issue. It’s just an acquaintance relationship. They (Gisela and the foreigner) just had dinner at times. And they are not (living) in one roof,”

Leyson said Niño was enraged by the rumors even as he was already separated from Gisela. The couple, however, tried to hide their separation from the public, she said.

Leyson said Gisela confided to her that she was not happy with her marriage.

“To be honest, she (Gisela) would tell me that their marriage was a joke. She was pregnant at the time. No ceremony was ever conducted and that she was just asked to sign a paper. And that’s their civil wedding (five years ago),” Leyson said.

“There were times when Gisela told me that she just want to die. She told me, ‘My life is a lie and a wreck.’ She wanted to have her marriage with her husband be annuled,” she added.

Gisela and Niño have a four-year-old son.

Leyson, whose husband is a policeman, was given two security escorts by PRO-7 since she is a vital witness to the case.
She yesterday spoke through the phone with Presidential Chief Legal Counsel Salvador Panelo who was informed by authorities about the case.

Read Next
When a union ‘made in heaven’ falls apart