When a union ‘made in heaven’ falls apart 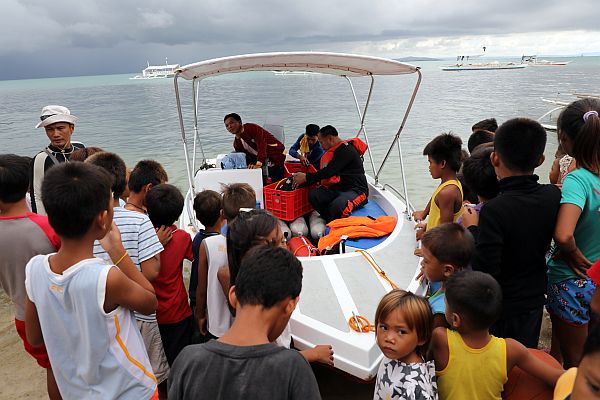 A TEAM from Bien Unido town of Bohol joins on Friday, June 9, 2017, the search for the town’s mayor, Gisela Boniel, whose body was believed dumped in the water of Caubian Island off Mactan Island, after she was allegedly killed on Wednesday by her husband, Bohol Provincial Member Niño Rey Boniel, inside a resort in Bien Unido.
CDN PHOTO/TONEE DESPOJO

The story of Niño and Gisela Boniel

Niño Rey Boniel of Bien Unido was making a mark, not just as one of the youngest mayors in Bohol but for improving his town’s classification from 5th class to 4th class during his term.

When they got married in 2015, their constituents thought it was a union made in heaven.

They elected Gisela as mayor in 2016 to replace her husband who also won as second district Provincial Board Member of Bohol.

On the outside, everything looked well between the couple.

But on Thursday, the residents were shocked when news broke out that the body of their mayor was thrown into the sea after she was allegedly killed by her husband.

The motive was not clear although police claimed that the marriage had been on the rocks due to financial problems.

“We were sad when we heard the news,” said Calixto Binangbang, 45, a resident of Bien Unido.

He said they didn’t expect that tragedy would befall on their favorite couple.

Another resident, Eisen Avenido, 51, described the couple as “good people.”

“Mayor Gisela was very close to the people, especially the senior citizens. She was a pilot, young, pretty and on top of it, a mayor,” he added.

Gay Mabanag-Delima, 36, councilwoman of Barangay Poblacion in Bien Unido, said the news about the Boniel couple left them in a state of shock.

“How I wish they will not be able to find her body so there is still a chance that she is alive,” she said.

Gisela, 40, and a native of Iligan City, had made history in the male-dominated aviation industry as the first female pilot of AirAsia Philippines with a rank of captain.

Her high school friends recalled that she had always been fascinated by planes since she was a little girl. By turning her dream into a reality, she inspired other women to take courage in pursuing their aspirations.

On Feb. 28, 2016, she received a commendation for outstanding airmanship after she steered an AirAsia plane to safety at the Mactan-Cebu International Airport in Lapu-Lapu City even if the plane only had one working engine.

Niño, 39, also made his own mark in his town in Bien Unido, about 108 kilometers from the capital Tagbilaran City.

Although he is from Bohol, he studied in Cebu and a product of the University of San Carlos, where he studied from elementary to college.

He finished Bachelor of Arts in Political Science and later took up Law while running his businesses. But he dropped out in his second year in law school because of his work.

Aside from an insurance firm, Niño owned Diamond Trading that imports vehicles from Japan and a restaurant in SM City Cebu. He was also a director of ABN Dreamworks Corporation.

Niño returned to Bien Unido to follow his father’s footsteps who was a town mayor.

At 29, he was elected mayor in 2007 and was the second youngest chief executive in Bohol’s history.

During his term, he elevated Bien Unido’s economic status from 5th class to 4th class.

He also tried to put the town in the tourism map by joining the Sinulog Grand Parade in Cebu and the Sandugo Festival in Bohol.

He also put up a resort accommodation to bring in tourists and divers who wanted to experience Bien Unido’s double barrier reef.

The Danajon Reef is the only documented double barrier reef in the Philippines and reportedly one of only six in the entire world.

Niño also improved the water system and infrastructure of the town, while addressing the other concerns such as health and sanitation, livelihood and peace and order; and was instrumental in curbing illegal fishing in the coastal municipality.

He put up an underwater grotto near the coral reefs of the Danajon Double Barrier Reef consisting of 14-foot tall statues of the Blessed Virgin Mary and Sto. Niño (the Child Jesus).

“Illegal fishers will be scared when they see these images,” he told the reporters during the launching several years ago.

Since the mayor was a bachelor, his constituents were curious if he would settle down and with whom since he had been associated with several women. Most of his ex-girlfriends were older than him, they said.

In 2010, Niño introduced Gisela to his friends. Five years later, the two got married. They have a four-year-old son.

The Boniel couple had a promising political career especially that they looked good together and had good credentials, said a local official who asked not be named.

Gisela, with her credentials, easily won over the hearts of the residents of Bien Unido when she ran for mayor in 2016 to replace her husband.

She had grand plans for the town that remained underdeveloped and still has to see higher number of tourists that were already being enjoyed by other towns in Bohol.

When she was sworn into office last year, Gisela said her priorities would be to bring in tourists as well as provide health services, education and livelihood to her constituents.

When she was criticized over her lack of experience in public service, Gisela took a crash course in local governance at the National College of Public Administration and Governance in Quezon City.

Although Niño and Gisela were seen together in public functions, their marriage actually began to fall apart in December last year when Gisela was attacked on Facebook by her husband’s political opponents and was dragged into controversies involving her husband.

Financial problems also took a toll on her marriage after Gisela took out a loan to finance a watch business and to buy a watch worth P2.5 million.

Niño reportedly got angry because Gisela could not pay her debts. But some close friends of the couple revealed that what infuriated Niño was Gisela’s move to file a petition for annulment after she discovered that her husband was involved in irregularities when he was mayor of Bien Unido.

“She discovered that her husband used her for his political advancement,” said another friend.