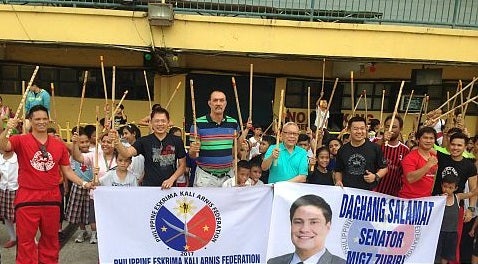 IN THE hopes of finding the next world champion, the Philippine Eskrima Kali Arnis Federation (PEKAF), in cooperation with the Cebu City Sports Commission (CCSC), is setting its sights on the grassroots level.

“We want to change the direction of training. We want to concentrate on the development and discipline of the kid,” said SGM Cañete, who is also planning to expand the program not only to the kids but also to the Physical Education (P.E.) teachers in Cebu this Saturday.

SGM Cañete revealed that the kids who will show immense potential will be given a chance to compete in international tournaments in Indonesia and Korea this September and possibly in the World Eskrima Kali Arnis Federation (WEKAF) world championships in Hawaii next year.

Aside from changing the direction of the sport, PEKAF will also set the new rules for the sport based on the program of Doce Pares, which is the only training program approved by the Technical Education and Skills Development Authority (Tesda), in the hopes of uniting all the eskrimadors in the country.