Duterte: ‘I will never compromise with terrorism’ 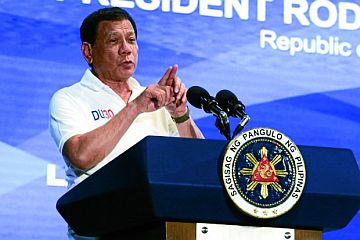 President Rodrigo Duterte said on Saturday he would never compromise with terrorists even as the death toll in the Marawi siege continued to rise.

“I will never, never, never, compromise with terrorism,” Duterte said in a speech he delivered before local officials at the Sports and Tourism Complex in Tagum City to mark the 50th founding anniversary of Davao del Norte.

Government troops have been fighting with the local terrorist group Maute and some foreign fighters in Marawi who want to establish a caliphate in the predominantly Islamic city.

“We will not go out there until the last terrorist is executed,” Duterte said.

The President said he was nursing “a heavy heart” knowing that so many of the government’s soldiers and police were dying in the Marawi siege.

“I am today with a heavy heart because by the time I reach home, nandoon na ’yung papel na briefer for the day and andoon na ’yung narratives,” he said.

“I get to read the so many soldiers and police who are dying,” he added.

Malacañang said 82 government troops and 303 terrorists had been killed in the battle.

Abdullah Maute, one of the leaders of the Maute Group, had earlier offered to release Fr. Teresito Suganob, Sports and Tourism Complex in Tagum City, in exchange for his parents and relatives who are now in government custody.

The Maute parents were earlier arrested by authorities in separate operations in Mindanao. Maute patriarch Cayamora was arrested in June 7 while matriarch Ominta Farhana was nabbed on June 9.

In a speech in Davao City on Thursday night, Duterte said the Marawi siege would “end in a matter of days.”

“The way it’s evolving now, I think it will be a matter of days. Before the end of the month, it will end,” he said.