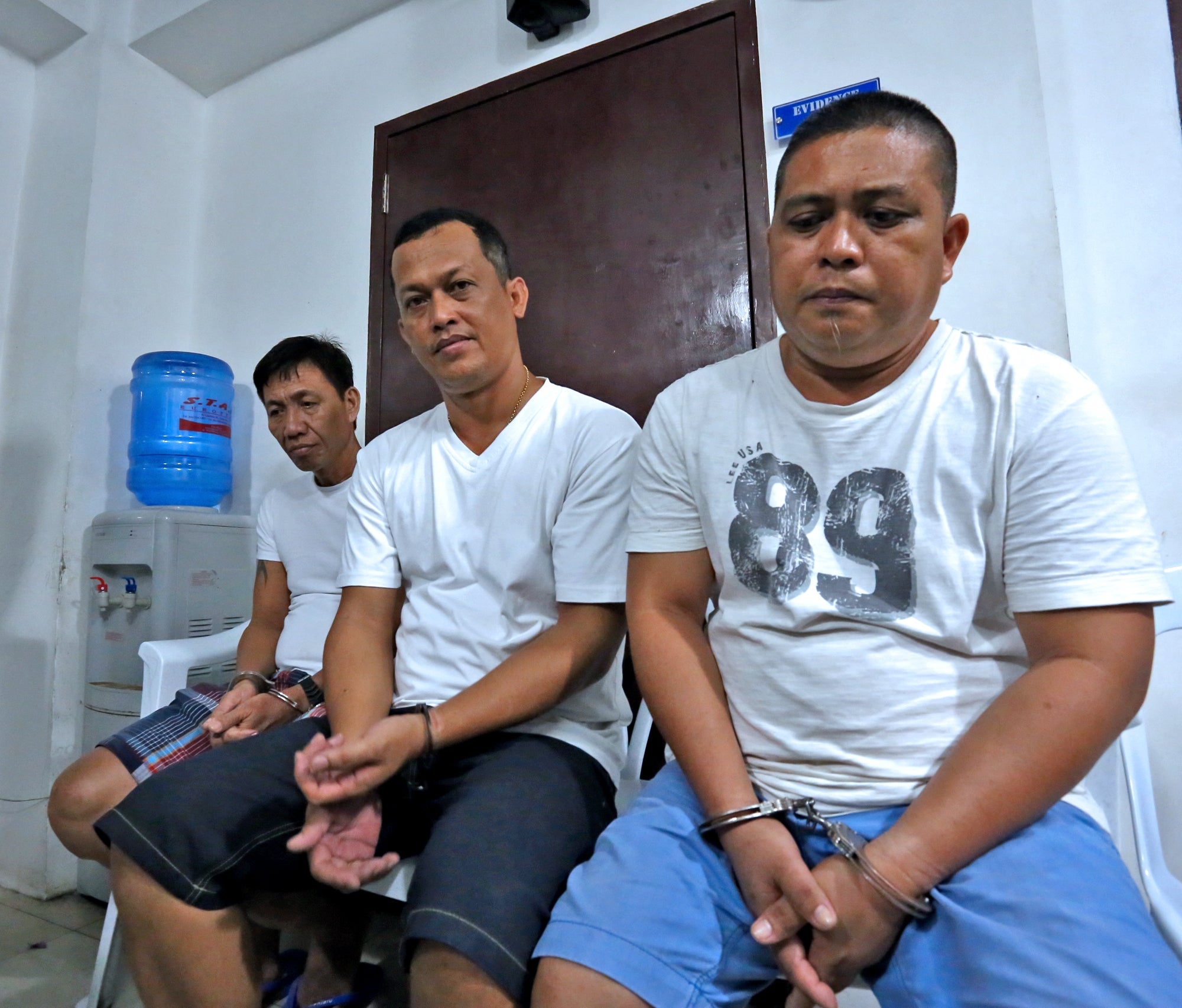 Franz Sabalones — the self-confessed Cebuano drug lord who claimed to have reformed upon his surrender last year as soon as he figured in President Rodrigo Duterte’s drug list — has apparently not changed for the better.

In fact, change was not coming for Sabalones if police claims pertaining to recent drug busts in his hometown, San Fernando, were to be believed.
Sabalones, police intelligence reports claimed, kept town officials at bay as he continued to operate his illegal drug network, with some of them even believed to be the drug lord’s “trusted men.”

At dawn on Friday, three of Sabalones’ alleged cohorts at the San Fernando Municipal Council finally fell into the hands of the police.

On the basis of search warrants issued by Regional Trial Court Judge Jerry Dicdican of Branch 25 in Danao City, simultaneous raids were conducted on the homes of Edwin Villaver, Alfonso Donaire IV and Johnny Arrisgado. All three are municipal councilors of San Fernando, a known Sabalones turf, 28 km. south of Cebu City.

Arrisgado, who is the captain of Barangay Magsico, sits as ex-officio member of the town council as president of San Fernando’s Association of Barangay Councils (ABC).

Donaire heads the town’s committee on public order and safety.

“Reports that reached us showed that they are protectors of some drug personalities. Whenever a drug suspect is arrested, they intervened. Para silang middle man, parang ina-harbor nila (They act as middle men. They harbor the criminals),” said Chief Supt. Noli Taliño, director of the Police Regional Office in Central Visayas (PRO-7).

Attempts by Cebu Daily News and Provincial Capitol reporters to contact San Fernando Mayor Lakambini Reluya through her mobile phone and landline for her comments proved futile, as the mayor’s phones remained out of reach the whole day yesterday.

For San Fernando Police Station chief Senior Inspector Adrian Nalua, the arrest of Villaver, Arrisgado and Donaire was sure to have a big impact on the town since the illegal activities of the three public officials were all “public knowledge.”

Armed with a search warrant, police entered the house of Arrisgado, 54, at around 4:30 a.m., Friday, in Barangay Magsico where a .45 caliber pistol, ammunition and one defective .30 caliber rifle were recovered.

Another team searched the house of 46-year-old Villaver at around 5:15 a.m. and confiscated two .45 caliber pistols, a 9mm Magnum revolver and a .357 revolver. Police also found a medium-sized pack believed to contain shabu.

Seized from Donaire’s house were a medium-sized pack of suspected shabu, a .45 caliber pistol and some bullets.

All denied any wrongdoing nor any involvement in the illegal drug trade.
“My only fault is that I kept unlicensed firearms. When the police arrived, my wife voluntarily handed my firearms,” said Arrisgado in Cebuano.
Arrisgado said he kept the firearms at home for self-defense.

“I did not use the firearms for illegal activities. As a barangay official, I have to keep a firearm in case trouble breaks out. Our place is a mountain barangay. We cannot call the police right away since our place has no cellular signal,” added Arrisgado.

Arrisgado said he has been actively involved in the government’s war on drugs and in fighting insurgency.

“I have been campaigning against illegal drugs. That’s why most drug suspects were arrested in other places because they can’t do their illegal activities in my area,” Arrisgado added.

“I am the chairman of the committee on public order and safety. I cannot be involved in illegal drugs. In fact, last Wednesday, we asked for some basketballs from the governor and we distributed them in our barangay as part of our anti-illegal drug campaign,” said Donaire.

The town councilors’ defenses are believed to be weak in the face of intelligence reports claiming that the three are Sabalones’ “trusted men,” said Chief Supt. Joie Yape, head of PNP Cebu’s provincial intelligence unit.

After appearing in Camp Crame in August 2016, Sabalones was released from custody of the Philippine National Police (PNP). According to his lawyer, Louie Arma, the PNP had no basis to hold him.

But Sabalones is being investigated by the Department of Justice (DOJ) for his reported involvement in the illegal drugs trade.
In an order released last January 18, the Court of Appeals issued a freeze order on the bank accounts and properties of Sabalones in relation to an investigation also conducted by the Anti-Money Laundering Council (AMLC).

For engaging in narco-politics, Taliño said more government officials are being monitored.

“The monitoring continues. We are getting information and we are validating them,” said Taliño.

“Our President has warned these narco-politicians. They should stop with their illegal activities because if not, they will end up in jail,” said Taliño.

Illegal drugs worth at least P1.5 million were seized from Alvizo.

“It is unfortunate that instead of helping us in our campaign against illegal drugs being government officials, they are the ones who are involved,” Taliño added.

For Department of Interior and Local Government in Central Visayas (DILG-7) chief Rene Burdeos, the arrests of the town councilors and barangay captains should serve as a reminder for government officials to maintain the high expectations and standards set by the people who elected them into office.

“They should set as a good example to their constituents. Well, those who are caught violating laws will face the consequences and penalties,” Burdeos told CDN in an interview.

Burdeos, a lawyer, said that the arrested officials will face criminal charges for violating Republic Act 9165 also known as the Dangerous Drugs Act of 2002, as well as administrative charges for grave misconduct.

“The campaign against illegal drugs exempts no one. These elected officials, if they choose to go to the other side and perform illegal activities, it’s their problem to face the inevitable penalties,” said Burdeos.

While saddened over the arrest of two of their colleagues, the ABC Cebu Federation president Celestino “Tining” Martinez said Arrisgado of Magsico, San Fernando, and Alvizo of Malabago, Badian, will have to defend themselves.

“Whether a barangay captain, a policeman or any person who was vested with the powers to ensure the well-being of the community, they should be the one to set an example to the people they are serving,” Martinez added.

For her part, Cebu Provincial Anti-Drug Abuse Office (CPADAO) chief Carmen Remedios “Ivy” Meca said that based on information reaching CPADAO, there are still politicians in the province involved in the drug trade.

“It’s part of reality. The recent buy-bust operations which yielded narco-politicians should be a reminder (to those who remain undetected) to watch out because the campaign against illegal drugs exempts no one,” Meca said.

Published reports show that from January to the first week of July 2017, at least nine politicians involved in illegal drugs were nabbed by authorities.
The number includes those arrested in the towns of San Fernando and Badian in southern Cebu.

Read Next
‘Cebu City has 770 sinkholes’