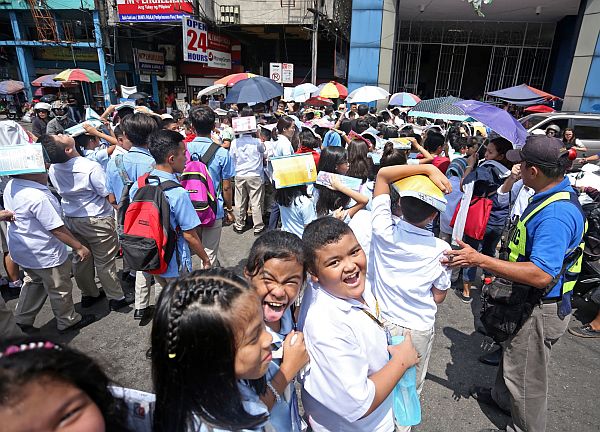 University of Cebu (UC) grade school pupils, accompanied by their teachers, go back to their classrooms after an aftershock jolted the school on Monday morning. Perhaps, out of sheer relief that the tremor had stopped, these two graders manage to give the CDN photographer a wide grin.
CDN PHOTO/LITO TECSON

No casualties, injuries or major damages on infrastructures were reported to authorities when another quake rocked Visayas at 9:41 a.m. on Monday, four days after a 6.5 tremor shook the region last Thursday.

According to the reports from Phivolcs, it was a magnitude 5.8 aftershock from last week’s jolt.

In Cebu City, residents felt the quake at intensity 3, interrupting transactions and conferences held inside the Capitol compound in Cebu City.

Capitol officials, employees and visitors were evacuated outside the building and were cleared to return inside approximately 30 minutes after the quake struck.

Angelo Andaza, a reception guard assigned in the executive building of Capitol compound, told Cebu Daily News that no medical supplies and equipment were made ready during the evacuation.

Julius Regner, executive assistant of the Provincial Disaster Risk Reduction Management Office (PDRRMO), said that the evacuation guide they gave to Capitol employees was a “very big help to keep them calm and to avoid panic.”

“This informs people where the exits are, and that made them calm during the evacuation,” said Regner.

Regner, however, received reports of several employees who opted to stay inside their offices – particularly in the legislative building of the Capitol compound.

“If possible, no one should be left behind because some parts of these buildings are not safe during stronger quakes,” warned Regner.

All Capitol departments are encouraged to have their own evacuation plans for their respective offices.

No damages were reported at the Capitol compound from yesterday’s aftershock.

It was business as usual in Cebu City offices and public elementary and high schools after an intensity 3 aftershock was felt at 9:41 a.m., Monday.

“The big earthquake that hit here was 7.2, so any building that would have collapsed, collapsed already. So if there’s an earthquake less than 7.2, I’m pretty sure nothing would collapse,” Cebu City Mayor Tomas Osmeña said calmly.

Disaster Management head Nagiel Bañacia said that no damage was reported by city engineers after their inspection.

Bañacia, however, clarified that the “business as usual” announcement was only a general directive, as the final instructions lie on local focal persons of the offices such as school principals.

“The focal persons of the Department of Education for elementary and high schools will immediately assess the situation. They will decide for their area. The decision making is localized,” Bañacia said.

According to Bañacia, the City Disaster Risk Reduction and Management Office (CDRRMO) is organizing a group of emergency responders who will be deployed on City Hall floors in cases of emergency.

“We will train them with basic and advanced life support, disaster preparedness, evacuation and identifying hazards in their offices for them to institute preparedness and mitigating measures,” said Bañacia.

The emergency response group will also serve as back up personnel if disasters will arise in the city, he said.

Following Thursday’s quake which was felt in Mandaue City at intensity 5, inspectors from the city’s Engineering Office, Office of the Building Official (OBO) and the Department of Education Mandaue City Division began a joint inspection of all public and private schools to determine the structural stability of the buildings.

Mayor Gabriel Luis “Luigi” Quisumbing told reporters that the city inspectors will continue to monitor the school buildings until these are all certified safe.

There were no reports of damage on private and public schools in the city after Thursday’s quake and its aftershocks.

After the school inspections, Quisumbing said all shopping malls, hotels and other business establishments in Mandaue City will be checked for compliance with the safety standards and regulations.

The establishments, said Quisumbing, will also be asked to submit their own evacuation plan and conduct disaster preparedness drills for earthquakes, fires, typhoons and other calamities.

“During the 2013 earthquake everyone was very active posting on Facebook updates on the earthquake. Pero, dali kaayo tang makalimot (But we easily forget),” Quisumbing added.

The mayor noted that an earthquake drill is very important to reduce panic as he pointed out the incidents involving Mandaue City students during last Thursday’s tremor.

At least 18 female high school and college students passed out while trying to evacuate from their respective school buildings during the earthquake.