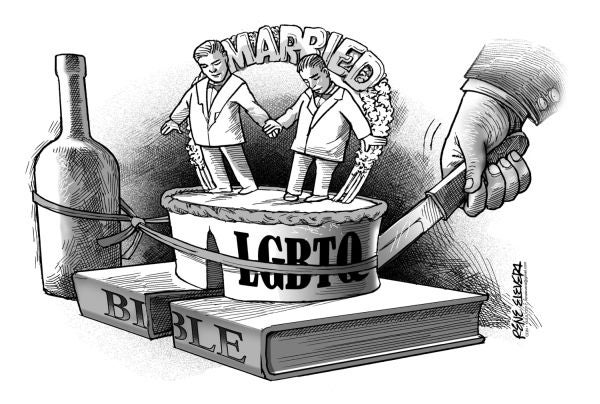 Would Congress find a suitable compromise to the clamor of the lesbian, gay, bisexual, transgender and queer (LGBTQ) community for same-sex marriage without inviting stringent opposition from the church?

Rep. Gwendolyn Garcia of Cebu’s 3rd District, who is also concurrent House deputy speaker, raised that possibility when she said the House leadership is supportive of civil unions not only for same-sex couples but also heterosexual couples who want to live together but are not ready to get married.

“I believe it is of great interest to a number of our brothers and sisters; I am speaking of civil union. We have to address this. This is a changing reality. It has become a growing necessity. This is to promote civil and human rights of same-sex and heterosexual couples who want to live together but are not ready to marry,” Garcia said.

She deflected questions about the church’s presumably strong sentiments on the issue by saying that a civil union bill “will address the need for same-sex couples to have finally achieved custodial rights over children, and even property rights” as well as deal with heterosexual couples “that chose to stay unmarried.”

Congress may have a better view of public sentiment on the issue compared to the church, which is adamant against any union not prescribed by the Bible. It should be noted that it is a civil union that is sanctioned by the state and may or may not need imprimatur from the church whether Catholic, Protestant and any other religious faith.

Even without the church’s approval, there are gay couples who live together and are not prosecuted legally for doing so. Though they may invite contempt and derision from others, the fact that these gay couples manage to make their relationships work may teach some lessons to other couples with less than satisfactory relations.

While marriage under the Philippine context prohibits divorce, it does allow leeway for separation on grounds such as incapacity, but the law as influenced by the Catholic Church emphasizes reconciliation over total, point-of-no-return annulment.

Aside from divorce, the church sees the clamor of the LGBTQ community for same-sex marriage as yet another affront or attack to the sacred institution of marriage that traditionally involves a man and woman.

With the number of LGBTQ members and common-law partners growing, it is ill-advised to ignore their voices and appeals for equality under the law, and one of their concerns is that they be allowed union even if it is only state sanctioned.

Whether that civil union bill will see the light of day as Congress reopens business next week — House Speaker Pantaleon Alvarez can be counted as one of its proponents — only time will tell, but at least it’s being discussed openly now and public engagement on the issue should be encouraged.

Read Next
Surviving with dignity