Hard work and determination pay off 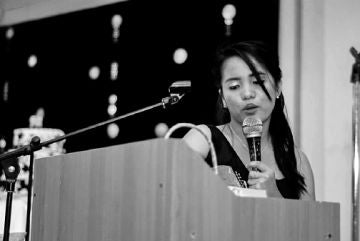 A daughter of a farmer from Barangay Guba, Cebu City, placed second in the Social Worker licensure examination given last month.

Apple Mae Opit at first thought it was impossible for her to finish college due to poverty. But she did it through hard work and determination, and even placed second in the board exam with a score of 85.60 percent.

When Share a Child Movement Inc., a nongovernment organization, opened doors for her to proceed to tertiary education, Opit did not waste time to sign up under the Bachelor of Science in Social Work program at St. Theresa’s College. She graduated in March 2015.

Last Wednesday night, Opit said she was surprised when her friend called her and told her about the result of the exam while she was riding a habal-habal (motorcycle-for-hire) on her way home to Guba, which is 12.3 kilometers away from the city proper.

Opit is the lone Cebuano who made it to the top ten list of passers, according to the Professional Regulation Commission (PRC).

Opit admitted that topping the board exam was what she wanted to achieve.

A week before the examination, Opit also wrote her inspirational speech in two paragraphs in case she would ace the exam.

Part of her speech was, “Success is mine because I worked for it.”

But now that Opit made it to the top 10, she said she would finish writing the rest of her speech.

Opit said that being an advocate of child protection was one of the reasons why she wanted to become a social worker.

Opit is the eldest of two children of Ramil, 42, and Precil, 40, who are both farmers.

Though she received a scholarship grant from the Share a Child Movement, Opit said she still needed to look for ways to provide for her meals and transportation.

To make both ends meet, Opit said she offered to make the research papers for her classmates and schoolmates for a fee of P400 to P500.

She also did part-time tutorials for two elementary pupils with P2,000 salary per month.

Sometimes, if she had no money for fare, Opit said she would walk for around 5 kilometers from her boarding house in Natalio Bacalso Avenue to St. Theresa’s College.

(I would wear PE jogging pants to make it appear that I was jogging, but actually, I was going to school.)

Opit said that when she was studying in elementary and high school, she also used to walk for about 45 minutes from her home to school.

Despite passing the board examination, she said she will continue working as one of the staff of Bidlisiw Foundation Incorporated, a social development nongovernment agency based in Cebu City that aims to help the most disadvantaged children and families among the poor communities.

She advised other social worker students like her to believe in themselves and not give in to pressure.

Read Next
RECLAIM THE TOP