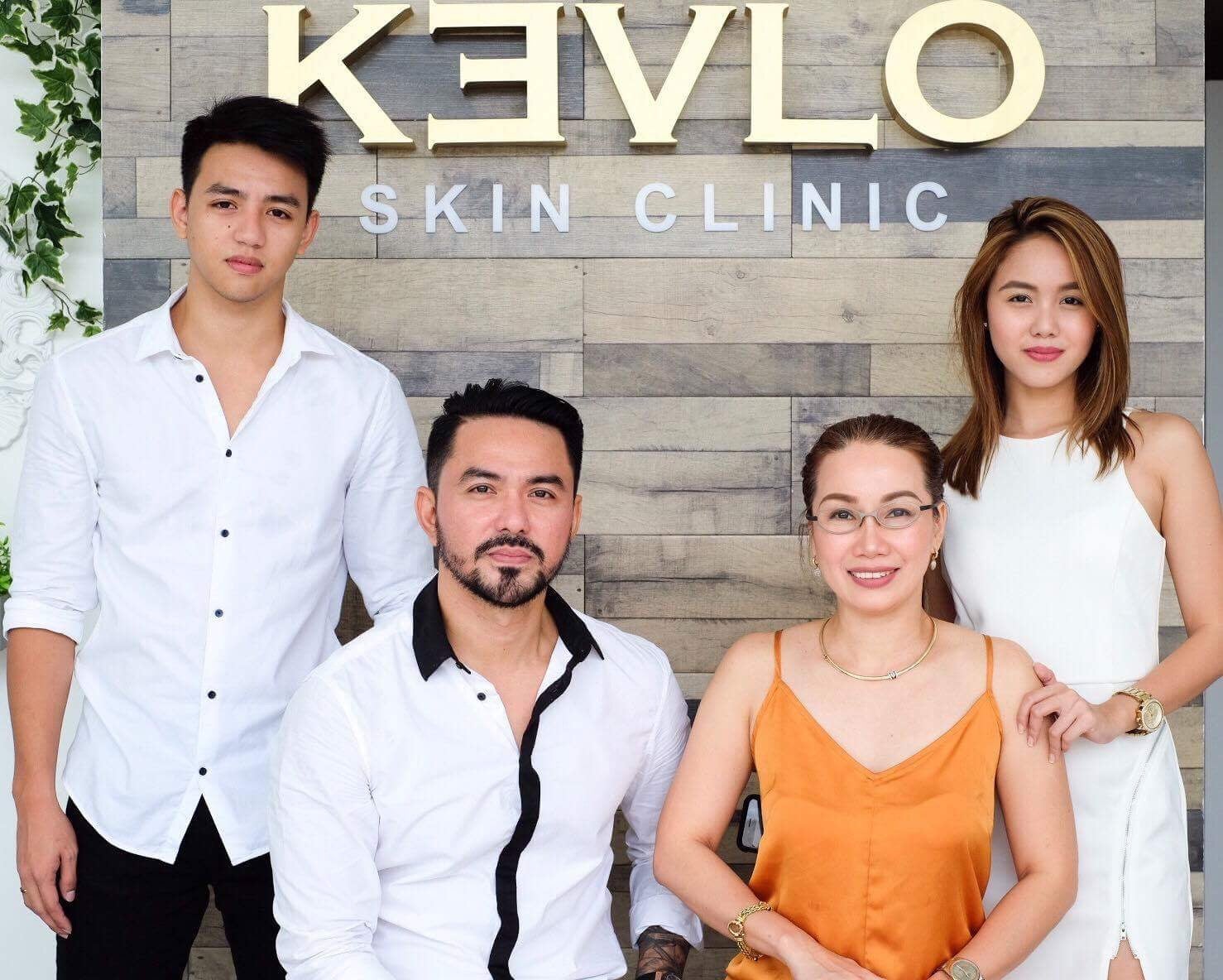 Mark Geniston, owner of Kevlo Skinceuticals, (second from left) has made the skin care venture a family business with his daughter, Lovely (right), managing one of the Kevlo outlets while his wife, Willibeth (3rd from left), handling finances and overseas clients. At left is his son, Kevin. (CONTRIBUTED PHOTO)

It was around 10 years ago when former overseas worker Mark Geniston realized what he truly wanted in life.

After a decade of working as a bartender abroad, with five years of experience in Dubai as well as five on a cruise ship in Miami, there was nothing more his heart desired than to be with his family in Cebu.

“It was hard during that time because there was no Viber, no means of seeing my family while I was away,” Geniston, 43, said in an interview with Cebu Daily News.

The ex-overseas worker married at 20 years old and with his family in mind, he grabbed every opportunity thrown at him so he could provide for his brood, even as he tried to juggle school and work.

Before flying to the Middle East when he was 21 years old, Geniston worked as a janitor, butcher and bagger at a supermarket. He also worked as a busboy, waiter, and then eventually assistant restaurant manager at a hotel in Cebu.

While he was working in Dubai, he would be gone for one year and would only stay in Cebu for one to two months each time he came back. After that, he would have to leave again.

Geniston recalled that his two children, Lovely and Kevin, who at that time were around eight or nine years old, would hide behind his wife, Willibeth, every time he came home.

It pained the father of two to be finally face-to-face with his kids yet still feel like they were miles apart.

“I remember it would take at least a week for them to warm up to me,” Geniston recounted.

That is why in 2007, Geniston decided to stay in Cebu for good and put up his own business so he can be with his loved ones.

Using the money he saved up from his jobs outside the country, he shelled out at least P300,000 to give birth to a skin care venture called Kevlo Skinceuticals.

Kevlo is a combination of the names of Geniston’s children, a testament to his devotion to his family.

The brand started selling only whitening soaps and facial sets, targeting those who want lighter skin as well as those who put much importance on beauty and wellness.

With already many players offering the same kind of products during that time, Geniston said it was hard for Kevlo to break into the market.

For three months, he would give out free samples to all his friends every time he gets the opportunity, and during those times, he admitted that he wasn’t generating any income at all.

After the third month, however, he said sales began to pick up as more of his customers realized how effective his products are.

From then on, they began selling 30 to 50 facial sets every month, which is equivalent to around P30,000.

Today, Kevlo offers 26 products, with the facial sets still the most in demand, selling 200 to 350 in a month.

“I guess it’s because more Asian people want to have whiter skin. It seems to be the trend nowadays,” Geniston explained.

Almost 10 years since the brand was introduced to the market, Kevlo launched their first skin clinic with a capital of P1.8 million last Feb. 1 at the Bonifacio District along F. Cabahug Street in Barangay Mabolo, Cebu City. Two weeks later, they opened another outlet across the University of San Carlos in Talamban.

The F. Cabahug outlet can accommodate 11 people at a time, with 10 beds and one scrub room.

On weekends, the outlet welcomes at least 50 clients a day. They are set to open their third outlet in SM City Cebu on October 1.

Geniston said that they will celebrate their 10th year on August 8 and will launch the first product under their cosmetics brand, which is a matte lipstick, the day after.

Kevlo Skinceuticals has come a long way, and Geniston said that more than the success of the venture, what is important to him is that the business has made their family closer than ever.

The businessman’s eldest child Lovely, now 23, manages the outlet in Talamban while his son, Kevin, manages a barbershop which they partly own in the same area.

Willibeth, on the other hand, handles finances and overseas clients.

Read Next
For the love of the street children of Cebu