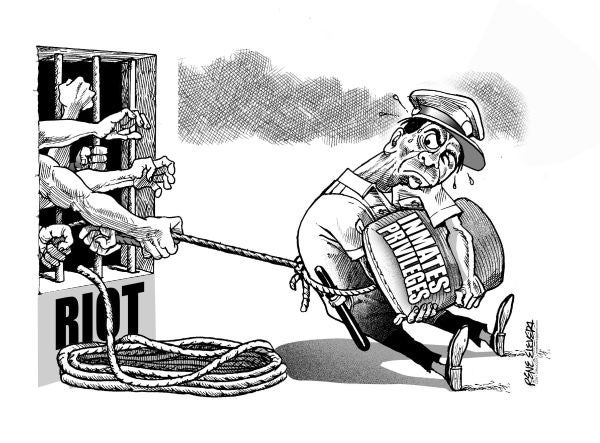 Something should clearly be done to defuse whatever tension is brewing at the Cebu City Jail amid threats of hostage-taking of visitors in the wake of the curtailment of their visitation rights.

While the phone call that claimed there was a plot to use visitors as human shields for a purported jailbreak turned out to be false, it sent jail management in a tizzy over security measures, and this cannot be allowed to continue.

Though the phone call supposedly stemmed from the jail management’s decision to limit visitations to five minutes a day and 20 visitors at a time, there were rumors that the inmates were being goaded by detained drug dealers.

Whether the dealers plan to use the jailbreak as a distraction to continue their trade or if they are serious about causing trouble in the first place, the fact is that the Cebu City Jail management is ill-equipped to deal with a full-scale jail riot unless they can immediately secure assistance.

There may be some teams in place to deal with the threat, but unless the inmates are reminded repeatedly not to incite jail riots lest they lose their other privileges, these rumors will continue to persist.

Then again, we are dealing with violent men and women who, despite the crimes they’ve committed, feel entitled to privileges enjoyed by people in society.

But unlike patients in hospitals who are accorded care and treatment for their illnesses, these inmates have lost their rights and privileges the minute they decided to commit to a life of crime.

Again, there were speculations that drug dealers are inciting their fellow inmates to riot in order to restore their visitation privileges. Never mind the fact that they brought this upon themselves when they chose to smuggle drugs inside the prison through their relatives and loved ones.

By rioting, they believe that the warden would be replaced and a friendlier official would be installed, one who can look the other way and be pliable to their demands. But the inmates are in no position to demand anything from the city government.

Like the Cebu City Jail inmate who escaped because he claimed to have been beaten up and served slop instead of adequately cooked meals, the inmates can only expect and hope to be given humane treatment, not five-star luxury.

They may be served better-cooked meals within a reasonable budget and their jail is badly in need of repairs, but to be blunt, the inmates don’t deserve to be treated with kid gloves.

Apparently, as in the case of the Cebu Provincial Detention and Rehabilitation Center (CPDRC) where the inmates are given a chance to earn a livelihood while in jail, there are inmates who are stubborn troublemakers, and they should be dealt with decisively before they encourage other inmates to make trouble.

Read Next
No to killings