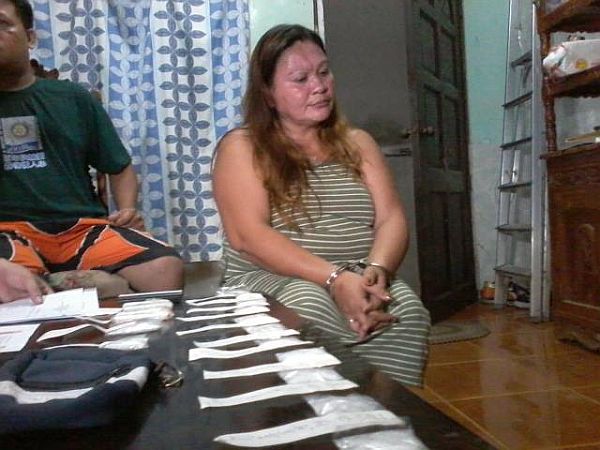 An incumbent councilwoman in Danao City in northern Cebu who was publicly identified by President Rodrigo Duterte as among the alleged “narco-politicians” in the country was arrested by police on Wednesday evening.

Thelma Nervida Sekiguchi, 40, was arrested in a joint operation by operatives from the Regional Intelligence Division in Central Visayas (RID-7) and the Danao City Police Office.

The drug suspect yielded at least 50 grams of suspected shabu (methamphetamine hydrochloride), which has a Dangerous Drugs Board (DDB) value of P500,000.

Senior Supt. Jonathan Cabal, RID-7 chief, said they had been monitoring Sekiguchi for allegedly being involved in the illegal drug trade in Barangay Tuburan Sur, where she serves as a barangay councilwoman.

“As early as 2014 and 2016 meron na siyang (she has had an) involvement sa drugs. She is a drug pusher. At ginagamit yung bahay niya (she used her house for shabu-sniffing sessions),” Cabal said.

Cabal said they had placed Sekiguchi in “on and off” surveillance operations, but they stopped monitoring her activities sometime in 2016 when she surrendered under operation Tokhang, the police’s massive anti-drug campaign that asked all suspected drug traders and users to surrender instead and not wait to be arrested.

“Matagal yung surveillance. Palitan kami (RID) at saka ng Danao City Police. Tumigil kami once we have the information na she is a drug surrenderee. We gave her somehow the benefit of the doubt,” Cabal said.

(The surveillance went on for a long time. RID and the Danao City Police took turns. We stopped once we had the information that she was a drug surrenderer. We gave her the benefit of the doubt.)

However, Sekiguchi, a native of Danao City who is married to a Japanese national now residing in Danao together with their children, did not stop her illegal drug activities.

Cabal said Sekiguchi operated not just in Danao City but also in its neighboring municipalities.

Based on their intelligence report, Cabal said that Sekiguchi could dispose of up to 200 grams of shabu per week.

According to Cabal, the councilwoman has ties with alleged drug lord Alvaro “Barok” Alvaro, who is currently jailed at the Cebu Provincial Detention and Rehabilitation Center (CPDRC) in Barangay Kalunasan, Cebu City.

In a text message to Cebu Daily News, Danao City Mayor Ramon Durano III said it was about time that Sekiguchi was arrested since she has been considered as a high-value target by the city police force.

The mayor said he has been briefed of Sekiguchi’s alleged illegal drug trade.

“Yes, last year pa when I got an information that she’s on the drug trade, but she denied (it), just like any other drug dealer. They always deny,” Durano said.

Sekiguchi is the seventh incumbent official in Cebu who has been arrested by police and anti-narcotics agents between July to August.

On July 4, Epifania Alvizo, the barangay captain of Malabago in Badian town, was arrested as packs of suspected shabu worth more than P2 million were seized from her and her cohorts in separate buy-bust operations conducted by agents of the Philippine Drug Enforcement Agency in Central Visayas (PDEA-7).

On July 7, three municipal councilors of San Fernando town in southern Cebu, including the president of the Association of Barangay Councils (ABC) of the town, were arrested in three separate raids by RID-7.

Arrisgado, the barangay captain of Magsico, sits in the Municipal Council as ex-officio member, being the president of the town’s ABC.

At past 6 p.m. on the same day, the Cebu Provincial Intelligence Branch (PIB) arrested Raul Mesa Cole Sr., a barangay councilman of Putat in Tuburan town.

On July 26, the PIB arrested former mayor and now Councilor Ricky Ramirez of Medellin town in an operation inside his residence in the town.

Cabal said Sekiguchi would not be the last official to get arrested.

He said new arrests could happen anytime since they have been closely monitoring all narco-politicians who were in the list of President Duterte.
“Yun yung directive sa atin ni RD (PRO-7 director Chief Supt. Jose Mario Espino) — to go after the narco-politicians,” Cabal said.

PDEA agents, together with the court sheriff, served the APO on Thursday afternoon to the concerned banks and to the registers of deeds in Cebu City and province.

The Anti-Money Laundering Council (AMLC) had filed with the court a petition for the issuance of the freeze order against the bank accounts, real properties and vehicles of Sabalones.

On August 4, 2017, the court issued a Provisional Assets Preservation Order (Papo), which was only valid for 20 days.

According to the PDEA-7 Director Yogi Filemon Ruiz, the court has rejected the argument of Sabalones’ camp that the latter has sold his properties.

“Within 20-day period, they failed to convince the court that he no longer owned the properties (listed in the freeze order),” Ruiz said.

With the latest order of the court, Ruiz said they could now padlock some of Sabalones’ properties, including the beach resort.

“The government is now the custodian of his properties and other assets,” he said.

He said PDEA will put up notices, to include a copy of the order of the court, at the affected properties, particularly the beach resort, so that the public would no longer patronize it. /with Correspondents Benjie B. Talisic and Jessa Mae O. Sotto

Read Next
A matter of survival