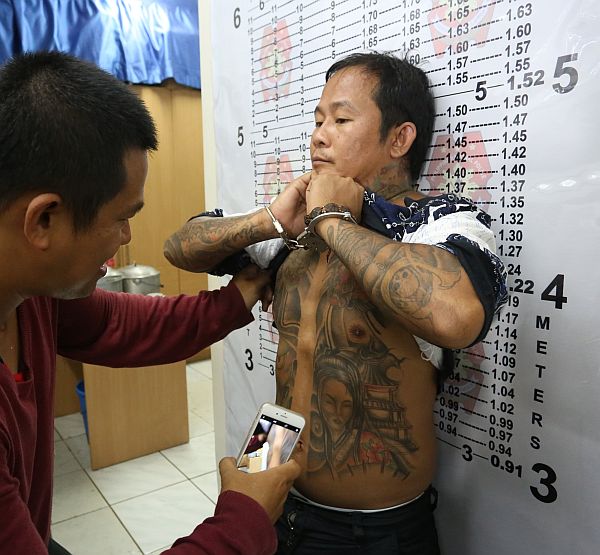 EVIDENCE. Police put on display the firearms and packs of shabu seized from Barangay Captain Jinnefer Mercader (foreground) of Lugo, Borbon, Cebu after his house in the neighboring Barangay Cahel of the same town was raided on Saturday, September 2, 2017, by operatives from the Provincial Intelligence Branch of the Cebu Provincial Police Office.
CDN PHOTO/JUNJIE MENDOZA

In Barangay Cahel in Borbon town, Jinnefer Mercader, 42, is known to his neighbors as a man who is wont to firing his gun indiscriminately.

But few would want to get in his way because he is also the village chief of the neighboring Barangay Lugo of Borbon, 82.7 kilometers north of Cebu City.

Recently, however, his neighbors have had enough and reported his trigger-happy ways to the police, leading to his arrest on Saturday.

It was while in the process of securing a warrant to search his property that police learned some disturbing information about Mercader.

He did not only possess unlicensed high-powered firearms, he was also allegedly involved in the illegal drugs trade. Moreover, by his own confession following his arrest, he was a hired gun who had been paid to kill, vigilante style, at least 30 criminals in Cebu City sometime in 2004.

Supt. Joie Yape Jr., chief of the Provincial Intelligence Branch of the Cebu Provincial Police Office (CCPO–PIB), said Mercader had confessed to the police that some “politicians” in Cebu had paid him to kill criminals.

(By his own revelation, he claimed he was used by the government. But we can’t give further statement about that since we will still verify his claim. Maybe he was just naming names.)

Mercader was arrested by PIB operatives after a raid in his house in Barangay Cahel yielded an M4 rifle with 20 ammunition and a caliber .38 gun loaded with four live ammunition; and one large pack and 40 small packs of white crystalline believed to be shabu (methamphetamine hydrochloride) estimated to be worth P311,000.

According to Yape, they first received reports from residents of Barangay Cahel that Mercader has been firing his guns indiscriminately in their area.

But when they conducted their surveillance, Yape said they also found out that the village chief had been suspected to be involved in some murder incidents and was previously jailed in Medellin town over a murder case.

“We also found out that he is into illegal drug trade. With that information, we applied for the search warrant,” Yape said in Cebuano.

The search warrant was issued by Judge Jerry Dicdican of the Regional Trial Court Branch 25 in Danao City.

Mercader denied any involvement in the illegal drugs trade but admitted that he is into illegal gambling.

He said that he operated over 50 video karera machines in his town and in Cebu City.

“Naa ko’y mga karera. Pero wala ko anang shabu karon (I have video karera machines. But I am not into selling shabu now),” said Mercader, who spoke to reporters yesterday while he was held at the PIB office in Cebu City.

But Yape said Mercader had admitted during questioning that he was into illegal drugs in the past.

Mercader also admitted to the police that he had links to the slain suspected drug lord Crisostomo “Tata Negro” Llaguno, according to Yape.

But in their surveillance, Yape said that Mercader is still into the illegal drugs trade, which is also supported by the evidence they seized from the suspect.

Mercader is the 14th incumbent barangay captain in Cebu who has been arrested due to illegal drugs since January this year.

In an interview with dySS, Mercader admitted to having killed at least 30 persons who had run-ins with the law sometime in 2004.

He claimed that some families who fell victim to criminals asked him to kill the suspects.

(Sometimes, the families of the victims asked for my help. But sometimes it’s just my own initiative, especially when I pitied the victim.)

The year with which Mercader confessed to have been a hired assassin for criminals was also about the same period when criminals were getting killed in Cebu City by unknown assailants.

In 2004 to 2006, when Tomas Osmeña was mayor of Cebu City, vigilante-style killings were reported almost daily in local and national papers.

Newspaper reports counted 168 victims. No suspect had been brought to court for lack of witnesses and complainants.

At that time, Osmeña offered a cash reward of P20,000 to policemen for every criminal they would “permanently disable and neutralize.”

He also formed the Hunter Team, an elite police unit whose task was to go after crime suspects in response to the series of robbery-killings that hit the city. Despite his strong stance against crimes, Osmeña had denied having a hand in the killings.

The executions stopped in the latter part of 2006 as Cebu prepared for the hosting of the Association of Southeast Asian Nations (Asean) Summit.
Sought for his comment yesterday, Osmeña said he does not know Mercader.

“I’m curious like anybody else would be. The name doesn’t ring a bell,” Osmeña told Cebu Daily News in a text message.

Yape, meanwhile, said that Mercader will remain in their custody while formal charges were being prepared against him.

Yape said they would be filing illegal possession of firearms and prohibited drugs charges against Mercader on Monday before the Provincial Prosecutor’s Office.

Read Next
A new brand of hot spice