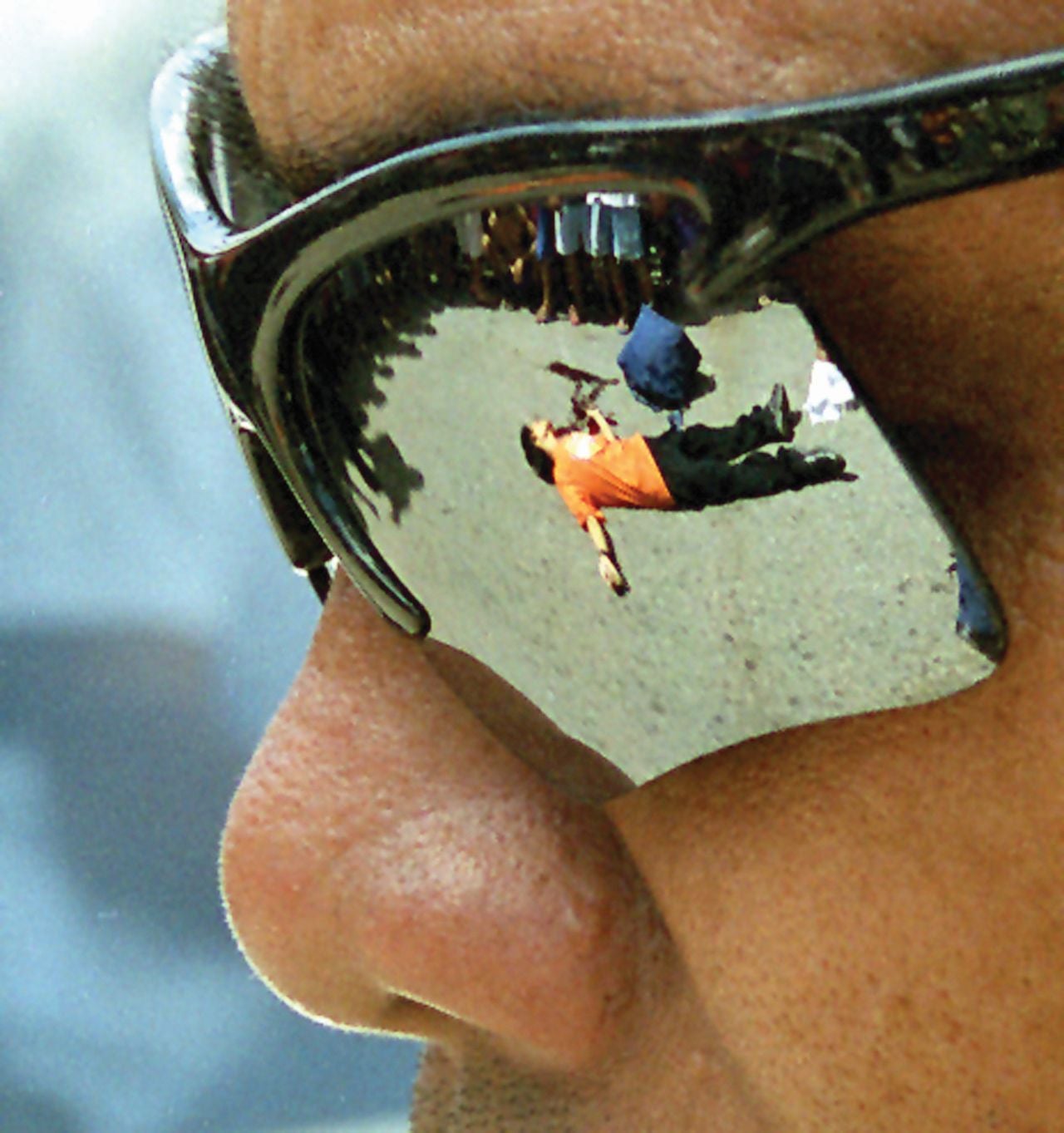 VIGILANTE VICTIM. This file photo was taken on June 13,2005: A victim of a vigilante-styled killing scrawled along McArthur Boulevard was reflected in the sunglasses worn by an unidentified Special Weapons and Tactics (Swat) personnel investigating the incident. (CDN FILE PHOTO)

The confession of Barangay Captain Jinnefer Mercader of Lugo, Borbon, that he was a hitman for some politicians in Cebu has rekindled interests into the unsolved deaths of over a hundred victims of extrajudicial killings (EJKs) in the city from 2004 to 2006.

Commission on Human Rights in Central Visayas (CHR-7) Director Arvin Ordon said they would be ready to reopen these cases and initiate a probe if the relatives of these EJK victims would ask for a probe and file complaints.

“We are calling the family of the victims of EJK, and the potential witnesses (to approach us and make a formal complaint)…to ensure that the victims of EJKs obtain meaningful justice,” Ordon told Cebu Daily News in a phone interview on Sunday.

He also encouraged them to be cooperative with police investigators who are validating Mercader’s claims, explaining that in this way, a speedy and fair investigation will be made.

“(We are also calling them) to cooperate with law enforcers in the investigations,” added Ordon.

On their part, CHR-7 will also make their own research to verify the arrested barangay official’s confession, especially that they only learned about him after news of his arrest was published on Sunday, said Ordon.

“Our office has an archive and records of the EJKs at that time, and we are going to look it up tomorrow (today, Monday) for verification… we haven’t read further details yet on the incident of the arrest, and of the revelations of the suspect being a hitman,” he said.

Some Barug Team Rama councilors also called for a deeper investigation into Mercader’s claim, as it was a very serious allegations against Cebu City’s politicians, said Councilor Jose Daluz III.

“The police should conduct more follow up operations and investigations and go deeper to secure an independent evidence other than his mere assertions,” Daluz told CDN.

Mercader was arrested last Saturday by operatives from the Provincial Intelligence Branch of the Cebu Provincial Police Office (CPPO – PIB) for illegal possession of firearms and of illegal drugs. The raid in his home in Barangay Cahel of Borbon yielded two firearms and 40 packs of shabu (methamphetamine) estimated to have a value of P311,000.

While denying his allegations of being part of the illegal drug trade, Mercader confessed that “several politicians in Cebu City” had paid him to kill individuals who violated the laws in 2004.

He even added that several families of those who became victims of criminals also made the same request.

Mercader claimed he had killed 30 criminals in Cebu City, including those he personally decided to kill out of pity for the victims they are preying, in 2004.

Ordon said he was particularly concerned that Mercader linked politicians to the killings.

“On the part of the CHR, we will coordinate with the police handling the investigation. Our concern is the alleged participation by politicians in the EJKs. As an agent of the state, elected government officials are morally and legally bound to ensure the respect and the protection of life, being a fundamental human right,” he explained.

An independent body, the CHR is tasked to investigate any instances of possible violation of the civil and political rights of any individual. These rights, enumerated in the Philippines Bill of Rights, include a person’s right to life, due process, and privacy.

But to formally start any investigation, the CHR has to obtain the approval of the complainant, or any relative of slain victims. The complaint must come with an affidavit.

Mercader’s confession that he was paid to kill at least 30 criminals in Cebu City sometime in 2004, coincided the time when vigilante-style killings of criminals became rampant.

Between 2004 to 2006, at least 168 persons with criminal records were killed execution-style by mostly hooded men in motorcycles. The spate of killings happened when Tomas Osmeña was the city’s mayor and had offered a P20,000 reward for every criminal killed by a policeman.

Osmeña, when reached for comment on Saturday night, however, said Mercader’s name “doesn’t ring a bell.”

The mayor, who had denied he had a hand in those unsolved killings, said he was just as curious about the identity of the politicians who had supposedly hired him to kill criminals.

Daluz, on the other hand, said this new development from Mercader could help solve the killings that happened during that time.

“We hope that the vigilante killings that happened in our city will now be solved and justice for the victims will be served and the mastermind be put in jail,” he said.

Councilor James Anthony Cuenco, another opposition councilor, said he had already expected the mayor to deny links to Mercarder.

“It will be unfair for me to comment based on mere insinuations and speculation. Not unless Mercader actually names him. But even if he does,

I’m sure TRO (Tomas R. Osmeña) will deny that he knows the guy. Nothing concrete will ever come out of this issue,” Cuenco told CDN.
Councilor Jocelyn “Joy” Pesquera said she believed the police should dig deeper into Mercader’s claim.

For his part, Councilor Joel Garganera said Mercader’s statement could be a pandora’s box that could lead to more revelations about this issue.
“This barangay captain, a former hitman, is close to the late Tata Negro. He might be opening a can of worms in here,” Garganera said.

Zafra, who is also the president of the Association of Barangay Councils (ABC), said the public should help monitor their own barangay officials and report them if they are involved.

“There is a need to conduct thorough investigation on this. This is very alarming and we need to coordinate all our acts together. We have to strengthen and police our own rank also amidst this very serious revelation of his,” he said.

He added that he’s sad to know that his fellow barangay officials got involved in illegal drugs.

Mercader was the 14th incumbent barangay official in Cebu who had been arrested due to illegal drugs since January this year.

“We are mindful of this and that we are urging the public to help us monitor the activities of our respective barangay officials concerned and report immediately to proper authorities whatever misdeeds or misdemeanor that their officials are into,” Zafra added.

Read Next
Palma urges local politicians to be law abiding