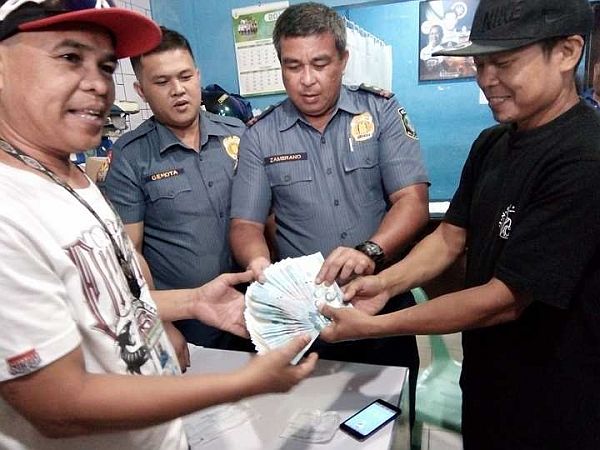 Joel Mondares, tourist vehicle driver of Charlie Travel and Tours, said that if the money was not returned to him, he would have to pay the lost amount through salary deduction for a year.

“Wala gyud ko magtu-o nga makit-an pa nako ning kwartaha pero talagsaon kaayo ang kinaiya ni Kerwin (I was resigned to not finding the money and having it returned to me, if not for Kerwin’s rare honesty),” said a grateful Mondares, who is a trusted aide of the owner of Charlie Travel and Tours and the man tasked to change dollar bills to pesos at the mall by his boss.

On Sunday, he was asked to change dollars worth P71,000 at the mall when, on his way back, he unknowingly dropped P59,000 of the cash.

Cariaga, who had been working at the mall for just five months, later found the wad of cash bills near the mall’s escalator.

He immediately inquired of anybody losing cash in the mall, and a money changer inside the mall informed him that Joel Mondares had earlier changed dollar bills with that much amount of cash.

The money changer then assisted in contacting through social media and verifying if their client did indeed lose cash which led to yesterday’s turnover of the cash to Mondares.

Cariaga said that he also needed money because his wife is ill, but the money he found is not his money and he pitied the one who lost it.

“Sa tinuod lang nanginahanglan kaayo ko og kwarta labi na nga duna’y sakit akong asawa. Pero dili man gud na atong kwarta, malo-oy sad ta sa tag-iya ana (Truthfully, I also direly need money especially since my wife is ill. But that is not my money, and I pity the man who lost it),” said Cariaga, who is the breadwinner of a family of four — his two children are elementary school students.

Senior Insp. Alden Zambrano, deputy chief of the Pusok Police Station, who helped facilitate the turnover of the money to Mondares, also commended Cariaga for his honesty.