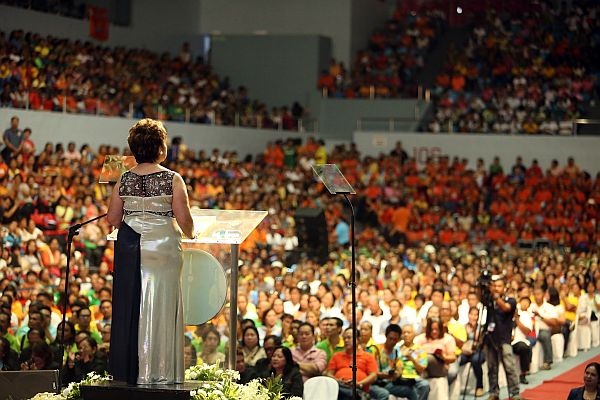 In a State of the City Address, Lapu-Lapu City Mayor Paz Radaza reports on multibillion-peso investments pouring into the premier city this year that, she said, was largely due to their business-friendly environment.
CDN PHOTO/LITO TECSON

THE continued growth of tourism, improved revenue collections, better roads, more classrooms and traffic lights were among the things highlighted by Lapu-Lapu City Mayor Paz Radaza during her “Report to the Oponganons” or State of the City Address, Wednesday.

Speaking at the Hoops Dome before members of the Sangguniang Panlungsod and an audience of 8,000 government employees, students and supporters, Radaza said that as Lapu-Lapu City continues to grow as home of world-class hotels and resorts, the city vows to always provide a good business climate.

Radaza noted multibillion investments from giant investors that poured in this year such as the expansion of Megaworld Corporation and JPark Island and Waterpark Cebu as a result of continuous efforts to provide a business-friendly environment.

“This is a premier 12.5 hectare Lapu-Lapu Leisure Mactan by the Udenna in Barangay Punta Engaño, bringing in billions of investments,” Radaza said in her annual report to Oponganons.

A multibillion-peso Sheraton Cebu Mactan Resort, with over 400 rooms and condominium units, is also being constructed.

According to Radaza, revenue collection grew by 53 percent in a span of five years since 2012 which earned the city an award from the Bureau of Local Government Finance for exceeding its tax collection target in 2016.

Data also showed that since December last year, most of the city’s hotels reported an 85 to 90 percent occupancy rate.

The mayor also said that she personally checks on two Facebook pages to see the concerns of the city’s residents such as complaints on traffic, garbage and the delay in the construction of the city hospital.

“Like you, I also want these matters to be resolved,” she said.

Radaza said the new traffic lights along the first bridge, City Hall and airport junctions will start to work after three months, while the installation of those in other areas will be completed within eight months.

“Our traffic lights will be useless if we will not follow traffic rules. That is why I am emphasizing on good citizenship. Each one of us needs to play our role. We will also be opening more roads and widening the existing ones to help in decongesting our traffic,” Radaza said.

Radaza announced that the Ylaya–Pag-ambakan–Marigondon road opening will soon be completed.

They were also able to secure the approval of the Department of Public Works and Highways (DPWH) for the widening of Basak Road from corner Aviation going to Gaisano Grand Mall. The widening project is estimated to cost around P100 million.

Fom January 2016 to August this year, a total of 123 kilometers of road was concreted and widened in Lapu-Lapu City, Radaza said.

Radaza added that they were also addressing problems in the city’s flood-prone areas through the City Disaster Risk Reduction and Management Office or CDRRMO.

“We have closely monitored those flood-prone areas through our CCTVs so that we can immediately respond and send out our equipment and personnel for sipping operations during the onset of heavy rains,” she said.

From 2015–2016, a total of 669 public school classrooms were built using local and national funds, while 75 new teachers were hired.

In the matter of peace and order, Radaza reported a 22 percent decline in the city’s crime volume in 2016 compared to the previous year.

Radaza also announced the appointment of a permanent City Civil Registrar this month to address corrections of Oponganons’ birth certificates and marriage contracts, among others.

“Let us make good citizenship a hallmark of a true Oponganon. We can work hand in hand so that truly, no Oponganon is left behind,” Radaza said in the speech which lasted more than an hour. /with Correspondent Norman V. Mendoza